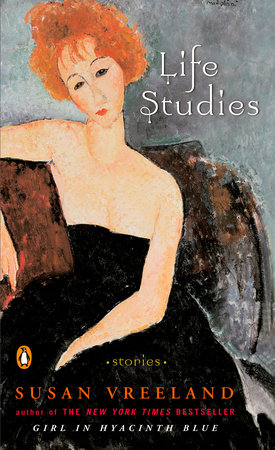 INTRODUCTION
With her richly textured novels Susan Vreeland has offered pioneering portraits of the artist’s life. Now, in a collection of profound wisdom and beauty, she explores the transcendent power of art through the eyes of ordinary people. Life Studies begins with historic tales that, rather than focusing directly on the great Impressionist and Post-Impressionist masters themselves, render those on the periphery—their lovers, servants, and children—as their personal experiences play out against those of Manet, Monet, van Gogh, and others. Vreeland then gives us contemporary stories in which her characters—a teacher, a construction worker, and an orphan for example—encounter art in meaningful, often surprising ways. A fascinating exploration of the lasting strength of art in everyday life, Life Studies is a dazzling addition to Vreeland’s outstanding body of work.

ABOUT SUSAN VREELAND
Coming out of the Louvre for the first time in 1971, dizzy with new love, I stood on Pont Neuf and made a pledge to myself that the art of this newly discovered world in the Old World would be my life companion. Never had history been more vibrant, its voices more resonating, its images more gripping. On this first trip to Europe, I felt myself a pilgrim: To me, even secular places such as museums and ruins were imbued with the sacred. Painting, sculpture, architecture, music, religious and social history–I was swept away with all of it, wanting to read more, to learn languages, to fill my mind with rich, glorious, long-established culture wrought by human desire, daring, and faith. I wanted to keep a Gothic cathedral alive in my heart. My imagination exploded with the gaiety of the Montmartre dancers at Moulin de la Galette, the laborer whose last breath in his flattened chest was taken under the weight of a stone fallen from the Duomo under construction in Florence, the apprentice who cut himself preparing glass for the jeweled windows of Sainte Chapelle, the sweating quarry worker aching behind his crowbar at Carrara to release a marble that would become the Pietà. In a fashion I couldn’t imagine then, I have been true to this pledge. I have brought to life the daughter of the Dutch painter Vermeer who secretly yearned to paint the Delft she loved. I’ve given voice to the Italian Baroque painter Artemisia Gentileschi, raped at seventeen by her painting teacher, the first woman to paint large scale figures from history and scripture previously reserved for men. On my own continent, I’ve entered deep British Columbian forests with Emily Carr, whose love for native people took her to places proper white women didn’t go. My imagination has followed Modigliani’s daughter around Paris searching for shreds of information about the father she never knew. I’ve imagined myself a poor wetnurse, bereaved of her own baby so that a rich woman, Berthe Morisot, might paint. I’ve taken my seventeenth century Tuscan shoemaker to Rome to have his longed-for religious experience under the Sistine ceiling. I’ve followed Renoir’s models to cabarets and boat races, to war and elopement, to the Folies-Bergère and luncheons by the Seine. Now some facts as to how I arrived there: After graduating from San Diego State University, I taught high school English in San Diego beginning in 1969 and retired in 2000 after a 30-year career. Concurrently, I began writing features for newspapers and magazines in 1980, taking up subjects in art and travel, and publishing 250 articles. I ventured into fiction in 1988 with What Love Sees, a biographical novel of a woman’s unwavering determination to lead a full life despite blindness. The book was made into a CBS television movie starring Richard Thomas and Annabeth Gish. My short fiction has appeared in The Missouri Review, Ploughshares, New England Review, Confrontation, Alaska Quarterly Review, Manoa, Connecticut Review, Calyx, Crescent Review, So To Speak and elsewhere.
AN INTERVIEW WITH SUSAN VREELAND
How did Life Studies take shape? Did you consciously set out to write it as a single work or did you gather these stories together after they were written? How are the stories in Life Studies linked thematically?

The collection grew organically over a twelve year period rather than by preconceived plan. I was just exploring my narrative range with individual stories, reading and writing about art and artists out of joy, undirected by a governing theme. Hesitant to make the painters the central characters, I relegated them to secondary roles and gave the conflict to characters who knew them. This felt right, as it allowed art to serve as a means of resolution. However, I wanted to bring the collection into the present day to address issues that readers could identify with.

The challenge was to find a unifying format for the collection. When I saw that individual historic and contemporary stories could take up similar themes, I wrote more stories targeted to create pairs, and conceived of a transitional tale far outside of both time periods and styles to present my premise, that ordinary people, not just those with art educations, can have profound experiences responding to art.

By virtue of art, wives in both sections discover their worth, daughters yearn for parents, and characters outgrow their former selves. Two stories use art to solve a problem, and several show non-artists through the centuries discovering the vital role aesthetics plays in the fully lived life. Once I saw the reappearance of themes, I felt the collection had coherence.

How did the process of writing Life Studies compare with your experience of writing your novels?

I wrote the stories on faith, not knowing my governing principle and themes at the outset as I would know them for a novel, but trusting that they would reveal themselves. The process of writing Life Studies was more intuitive than for my novels. I took delight in dipping into different time periods and cultures and creating a wider range of voices, social classes, and sensibilities than I would likely have in a novel.

The short story form requires exactitude in making every sentence move the story forward or enhance characters or theme. There is no space for digression, and usually only one story can be told, whereas in a novel, minor characters can have their own stories which contrast or complement the main character’s issues which themselves can be more complex than in a short story. Isolating a single theme and single character issue sets the focus and parameters of short fiction.

Some of the characters in these stories are entirely fictional while some are based on actual people from history. How does the writing process differ with respect to these two types of characters? Do you find one type easier than the other?

Archival and published history often doesn’t record the relationships that are significant, so I have to invent characters to allow the artist to reveal himself through interaction. For example, Monet’s gardener, the boy who threw figs at Cézanne, Berthe Morisot’s wet nurse, the father of the girl with the watering can were pure inventions, while Manet’s and Monet’s wives were drawn from biographies.

My process follows the steps of discovery, focus, selection, and invention, with research happening throughout the process. Finding a story I wished to tell buried in known history or suggesting itself in a painting is as exhilarating for me as discovering hidden treasure. The sooner I am conscious of character questions and moral questions, and the more precisely I can articulate themes, the easier it is for the work to take a deliberate form rather than growing haphazardly.

With the contemporary stories, character development and conception of a situation occur simultaneously. Of course I have more liberty. At first, imagining a fictional character was less daunting than turning a historic figure into a story character, but I soon became comfortable doing both. Now, one is no easier than the other. It’s equally joyous to invent as to research and adapt.

The Professor of Desire
Philip Roth

A Play for the End of the World
Jai Chakrabarti

The Sisters Sweet
Elizabeth Weiss
Back to Top