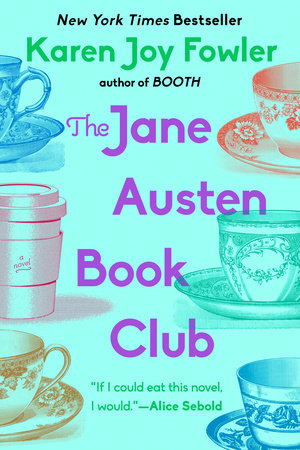 “Real people are really complicated,” says Jocelyn, the founder of the “Central Valley/River City all-Jane-Austen-all-the-time book club.” And the members of her newly founded book club certainly prove this to be true. Each has a story to tell, and much like an Austen novel, the intricate plots that are their own lives are slowly revealed. There’s Sylvia, Jocelyn’s friend of forty years, who is in the midst of a painful divorce. Her daughter, Allegra, beautiful, vivacious, a “creature of extremes” who finds her thrills through skydiving and rock-climbing but can’t seem to find love. There’s Bernadette, the oldest member at sixty-seven, a woman who has married well, several times at that, and even had a brush with fame, but currently looks disheveled and distracted. Prudie is the only member who’s currently married. She’s a high school French teacher and a great believer in organization, and finds comfort in her lists when life feels overwhelming. Grigg is in his early forties, yet his older sisters still feel protective of him, hoping to rescue him from the legacy of their father. And last, there’s Jocelyn. Never married, she has a keen interest in the happiness of others and is constantly playing matchmaker. In fact, this could be her underlying motivation for inviting Grigg, the only member of the group who’s never before read Austen. Or perhaps she thinks the book club will serve as a distraction for Sylvia. After all, who better to heal one’s pain than Jane Austen?

If you liked The Jane Austen Book Club, you might also want to check out our Austen-Mania page.

One Day (Movie Tie-in Edition)
Back to Top