Riding With the Queen Reader’s Guide 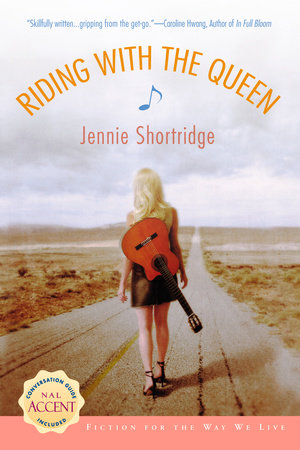 Riding With the Queen Reader’s Guide

Full of big dreams of the fast life, Tallie Beck hit the road at the age of seventeen to become a rock ’n roll star—and vowed never to look back. Now, at thirty-four, she’s little more than a down-and-out singer who smokes and drinks too much and knows better than to make promises she can’t keep. Dumped by her latest band and low on cash, Tallie has no choice but to go back to Denver. Back to her crazy mother, and her resentful younger sister, Jane, who’s never forgiven her for leaving.

But seeing her family again after all these years stirs something unexpected in Tallie. And after so many miles on that long, exhilarating, scary—and often lonely—road, she’s looking back to trace some wrong turns, and figure out the way to where she really wants to go…

Jennie Shortridge lives in Seattle, Washington, with her husband, and juggles her time between writing novels and working in the community to foster literacy.

A CONVERSATION WITH JENNIE SHORTRIDGE

Q. What inspired you to start writing Riding with the Queen?

A. Like Tallie’s mother, Lee, my mother struggled with bipolar disorder. Unlike Lee, however, my mom grew progressively worse over the years and died a very early death in 1990 at the age of 57. I’ve been writing about my mother for most of my adult life, but this time I wanted to write a fairy tale—I suppose to try to console myself. What if Mom had found a way to get better? I realized through writing the book, of course, that the real issues of mental illness had to prevail. Dealing with it is a constant struggle, one that some people are better equipped to handle than others.

Q. Have you experienced Tallie’s trying life on the road?

A. Although I’ve been a working musician on and off since I was sixteen years old, I’ve never been nearly as successful as Tallie. In the mid-1980s, my band, The Untouchables, played nearly every week, but we all worked day jobs in Denver, so we really couldn’t travel too far afield. If our gigs were out of town, we shared crummy motel rooms, but more often, we were driving home at three or four in the morning so that we could get to our respective day jobs by eight, then make the two- or three-hour drive back to the gig that evening.

Q. Who are your literary influences?

A. My three sisters and I were voracious readers from an early age, inspired by our mother. As a kid, I sought out books about characters overcoming obstacles and social injustices: Berries Goodman by Emily Cheney Neville, Adventures of Huckleberry Finn by Mark Twain, and To Kill a Mockingbird by Harper Lee. In my young adulthood, it became Alice Walker, Barbara Kingsolver, Julia Alvarez, Louise Erdrich, Rita Mae Brown, John Irving, and Tom Robbins for good depraved fun. Michael Dorris’s A Yellow Raft in Blue Water deeply affected me. Recent favorites include Nick Hornby, Sarah Waters, Charles Baxter, Manil Suri, but I find I can’t read while writing, so my intake is pretty limited these days.

Q. Does your music somehow inform your writing, and vice versa?

A. I wrote poetry from a young age and it was always set to music in my mind, so that’s how I became a songwriter. Once I began to seriously write for magazines and develop my fiction, the songs stopped coming, but I find that rhythm and cadence are still very important to me. I can’t stand a sentence without the right rhythm!

Q. Did you ever have an old blues singer for a conscience? Who are your musical role models?

A. I’ve never had a guardian angel or ghost, but I think as a child I always wished there was someone there who could take care of my sisters and me when times got bad. When Big Gal Sal popped into the story, it surprised me but comforted me, too. I’ve loved old blues music since being introduced to it by Bonnie Raitt’s records in the early 1970s, and I think of those old blues performers as musical elders, our rock-and-roll ancestors. As a writer, I’ve been very influenced by brilliant storytelling songwriters like Elvis Costello, Shawn Colvin, and early Jackson Brown. If I could do in print what they do in song, I’d be thrilled.

Q. You capture the range of human emotion so well in Riding with the Queen. Did you learn something about yourself while writing this book? Do you see yourself in Tallie?

A. Tallie is willing to do and say things that I sometimes wished I’d been able to, but she’s not based on me. I didn’t act out as a kid—I was always the quintessential good girl, a little bit like Jane. I think that was the fun of writing Tallie, living vicariously through her. I set out to write this palliative fairy tale, to make sense of growing up with a mentally ill mother, and ended up relearning old lessons as Tallie learned them for the first time. Mental illness is a disease like any disease of the body. Those who suffer from it are not trying to be sick and can’t simply change themselves by trying harder, just as someone with cancer or heart disease can’t. All we as friends or family members can do is change our perspective and try to be as understanding and caring as possible while making sure we take good care of ourselves.

Q. Jedd is a great foil to Tallie—he seems to be written with a lot of attention and animosity. Do you know musicians like Jedd?

A. I think Jedd is an amalgam of men and musicians I have known, certainly, but no one I was ever personally involved with, thank God!

Q. Has it been difficult to be a female musician in a largely maledominated industry?

A. Not in my infinitesimally small experience of being a musician, but then again, I was always a singer in a band of guys—a very acceptable format.

Q. Would you like to say something about singing in a band with your husband?

A. I met my husband, Matt, in a band that never got off the ground. When it fell apart, we became an acoustic duo (he’s a guitarist) because we had no equipment. But it was a godsend. I was turning thirty and had no desire to hang out in smoky bars and sing for five hours a night anymore. We played in coffeehouses and at outdoor festivals, doing one- or two-hour shows. My ears stopped ringing. My voice softened. I got some sleep. And I found my wonderful life partner.

Q. Your book is ultimately about redemption and forgiveness. Did you know how it was going to end when you started writing?

A. I knew the basic story line from beginning to end but very few of the details. I didn’t know how the characters would act and react under the weight of the situations, and I didn’t know at what points they would break or bend or rise above. For me, the fun of writing is experiencing what happens as it happens.

Q. What do you consider important secondary themes?

A. My mission at this point in life seems to be to try to express themes of tolerance and acceptance. From Lee and Audra’s relationship to Perry’s homelessness, I wanted to show that people are widely diverse, sometimes suffering, sometimes surviving, and sometimes thriving because of their choices, but always, I believe, doing the best they can. I used a lot of religious imagery and wording in the book to express my views of spirituality. I understand that organized religion works well for some people, but some of us find our spirituality in the everyday, in the small quiet moments of life, in the love we give and receive. I think it’s as valid a religion as any other.

Q. Describe your writing process. Do you have any strange peccadilloes or work habits when you write?

A. Every morning after breakfast, I trundle off to my little home office with my second cup of coffee, still in my pajamas with my hair sticking out and my teeth unbrushed. I write until I get hungry again, about noon, then go get dressed for the day, take a break, and move on to editing or other tasks. If I try to write in the afternoon, it’s like going into a coma or something. I get blocked, frustrated, and write stiff uninspired crap. Mornings are my creative time.

Q. How long did it take you to write Riding with the Queen?

A. It took me a little less than a year to write the first draft. Because I was in this huge learning curve, trying to figure out how to write a novel, my revisions and rewrites seemed endless, about another two years.

A. I’m writing a novel about a freelance food writer with bigtime food issues. She’s losing someone she dearly loves to cancer, dealing with an emotionally distant mother, and trying to unravel the mysteries of her family’s secrets while at the same time trying not to eat herself into blimplike proportions. Like Tallie, like many of us I suppose, she’s on a mission to understand her past so she can move on with her life.

Learn More About Riding With the Queen
print

How Dolly Parton Saved My Life

The Promise of Forgiveness

Raising Cain … and His Sisters

Osprey Island
Back to Top