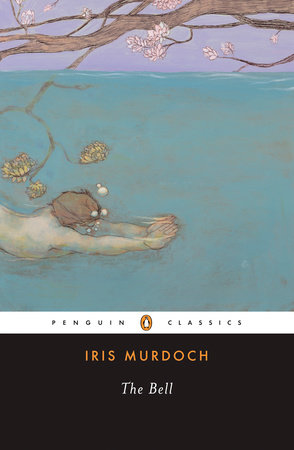 Like the great realists Tolstoy, Eliot, and James, Iris Murdoch is preeminently concerned with the problem of how to live ethically in a world of accelerating change and declining faith. She studied and wrote philosophy as well as fiction, and her novels explore the fate of ideas once they are subjected to the exigencies of daily life. Murdoch’s ability to blend social satire with a sharply observant yet compassionate view of her characters is fully displayed in The Bell, often considered her most characteristic and satisfying novel.

The novel begins with Dora Greenfield reluctantly setting out for Imber Court, a fledgling lay community just outside the walls of an Anglican convent, to rejoin her estranged husband, Paul. The spiritual goals of the group gathered at Imber Court enable Murdoch to investigate the question of whether moral absolutes must be modified to accommodate human nature. The community is started by the Abbess of Imber Abbey and Michael Meade, owner of the Imber Court property and a frustrated would-be priest with a checkered career as a schoolmaster. The Abbess proposes the lay community as a “buffer state” between the world and the convent, a refuge for the “half-contemplative” who “can live neither in the world nor out of it” (p. 71). This modified religious aspiration is further diluted by the mixed motives of many of Imber Court’s residents, and the community verges on becoming a mere house party. In this light, the admonitions of one of the Court’s residents, Mrs. Mark, about following rules have a serious aspect, despite her strident self-importance. As she tells Dora in a rare moment of insight, “trying to live up to ideals does often make one look ridiculous” (p. 224).

The bell that gives the novel its title embodies the emotional forces that both draw people to Imber Court and threaten to destroy it. The bell’s meaning and power are ambiguous to the characters and the reader alike, not least because there are two bells—the Abbey’s original bell, lost centuries earlier, and the new bell scheduled to replace it. Paul takes satisfaction in telling his adulterous wife the legend of the original bell flying into the lake when a nun at the Abbey refused to confess to having a lover and then drowned herself. When Dora and Toby, the idealistic student who has come to Imber Court to explore communal religious life, retrieve the lost bell from the lake, they discover that its inscription reads “I am the voice of Love” (p. 205). The bell and its legend highlight the struggle between divine and human love that many of the characters, particularly Michael and Catherine—the postulant secretly in love with Michael—experience acutely.

The significance of Dora’s plan to secretly switch the old bell for the new one is as ambiguous as the bell itself; whether she wants to “play the witch” (p. 184) to undo the community or “make a miracle” (p. 183) is unclear. But when Dora hears Nick, Catherine’s troubled and occasionally malicious brother, telling Dora’s lover Noel about the plan, she must weigh her motives against a larger principle. Alone with the bell, Dora sees that her plan may lead outsiders to ridicule the community. She realizes that the bell embodies something larger than her own wishes: “She had thought to be its master and make it her plaything, but now it was mastering her and would have its will” (p. 249). The moment when Dora hurls herself against the bell, summoning the community and ending her plan, marks an epoch in her moral growth.

Scenes like this one, in which we see a character think and change, give The Bell its emotional depth. Besides Dora, Michael is the character who changes most in the course of the novel. Michael is necessarily conflicted, as he seeks to reconcile his desire to be a priest with his attraction to young men; unlike James, the self-made religious social acitivist, Michael cannot see the world in morally absolute terms. Believing that “his religion and his passions sprang from the same source” (p. 94), he wonders whether this undermines his religion or purifies his passions. Michael compares his own sermon, a “commendation of the second best act” (p. 190), when it is what a person’s spiritual capacity allows, to James’s demand that everyone do “the best thing” (p. 120) in all cases, and fears his sense of moral complexity is a weakness. Michael’s past relationship with Nick and his transgression with Toby make him painfully aware of how easy it is to harm without intending to. As the narrator remarks soon after Michael has kissed Toby, “Our actions are like ships which we may watch set out to sea, and not know when or with what cargo they will return to port” (p. 151). Fittingly, the novel’s final chapters reveal the consequences of many of the characters’ actions.

In The Bell, Murdoch enjoins something of the novelist’s art on us all, urging us to imagine others’ stories. The defining moral moments in Murdoch’s fiction are those in which characters imaginatively change places. Thus, after Michael kisses Toby, he sees “that he had damaged somebody other than himself. He pictured Toby’s reactions: the shock, the disgust, the disillusionment, the sense of something irretrievably spoilt” (p. 151). Toby’s own moral growth begins in the aftermath of the kiss, as he passes from fury to considering Michael as a person: “He began really to envisage Michael. What was it like to be Michael? What was Michael thinking now?” (p. 148). Murdoch leaves us to weigh the respective claims of moral absolutes and human frailty, but allows no doubt about the obligation to consider others as fully as ourselves.

Born in Dublin in 1919, Iris Murdoch grew up in London. An only child, Murdoch described her father, who discussed books with her from her early childhood, as “the greatest influence in my life.” She recalled Treasure Island, Kim, Alice’s Adventures in Wonderland, and Through the Looking-Glass as the first books she enjoyed. She showed an interest in and facility for languages and learned Latin and Greek. She was educated at Somerville College, Oxford, where she read classics, ancient history, and philosophy. After graduating in 1942, Murdoch worked for the wartime British Treasury. In 1944 she took a position with the United Nations Relief and Rehabilitation Association, working with refugees and displaced persons in Belgium and Austria. Murdoch joined the faculty of St. Anne’s College, Oxford, in 1948, where she taught philosophy until 1963. She married fellow Oxford instructor and writer John Bayley in 1956.

Murdoch’s first novel, Under the Net, appeared in 1954. It was followed by twenty-five more, of which The Bell (1958), The Nice and the Good (1968), The Black Prince (1973), and The Sea, the Sea (which won the Booker Prize in 1978) are some of the most celebrated. In addition to novels, she published poetry, plays, and works of philosophy, including Metaphysics as a Guide to Morals (1992), the clearest summation of her own convictions. During her lifetime she was recognized as one of Britain’s major novelists, uniquely able to combine realism and myth in narratives that commented upon the times. She was made a Dame Commander, Order of the British Empire in 1987 and died in 1999. That same year, her husband publishedElegy for Iris, a memoir of Murdoch’s battle with Alzheimer’s disease.

Umberto Eco, The Name of the Rose (1980)
Set in a fourteenth-century Italian monastery where Brother William of Baskerville is investigating the murders of seven monks, this novel is both a mystery and a sophisticated exploration of the truths of faith and science.

Rumer Godden, In This House of Brede (1969)
When Philippa Talbot, a successful forty-year-old London businesswoman, decides to enter Brede Abbey as a postulant, she must confront tensions in both the convent and herself.

Nathaniel Hawthorne, The Blithedale Romance (1852)
The fictional Blithedale is based on Brook Farm, the experimental transcendentalist community Hawthorne briefly joined. The novel shows the unraveling of this idealistic commune through intrigue, impracticality, and passion.

Anthony Trollope, Barchester Towers (1857)
Political maneuvering within the Anglican Church is the focus of this large-scale novel, in which the powerful Mrs. Proudie, wife of the Bishop of Barchester, wages covert but determined warfare against the upstart chaplain Mr. Slope.

Joanna Trollope, The Choir (1978)
When the roof of Aldminster Cathedral needs costly repairs, the town is divided between those determined to save the famous boys’ choir and those who want to eliminate it—a situation exacerbated by a range of romantic and family complications.

Learn More About The Bell
print

Night and Day
Back to Top