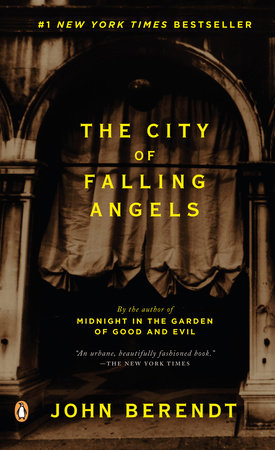 Twelve years ago, John Berendit’s Midnight in the Garden of Good and Evil exploded onto the literary scene and stayed on the New York Times bestseller list for a record-breaking four years. The City of Falling Angels, Berendt’s first book sinceMidnight, is the same unique brand of literary nonfiction that made him a household name. Like Midnight, Falling Angels is a masterpiece of journalism, storytelling, and social insight, doing for Venice what Midnight did for Savannah, Georgia. It is a compelling look at an otherwise inaccessible community of people who inhabit one of the world’s most beautiful cities, a city steeped in art, history, tradition, and ritual.

In particular, The City of Falling Angels is a portrait of the intriguing and colorful private Venice—the world that exists in the off-season, when the tourists have departed and Venetians have Venice all to themselves. The book opens with Berendt riding in a water taxi to his hotel three days after a colossal fire destroyed the Fenice Opera House, one of the most beloved cultural landmarks in Venice. Berendt decides to extend his stay to learn more about the fire and the city from the most beguiling source, though not necessarily the most reliable—the Venetians themselves.

Drawing on all his talents as an investigative reporter, Berendt goes behind the façades of decaying buildings to reveal the city’s intricate, hidden private life. Byzantine by nature, the Venetians reveal themselves in both open and secretive ways—after all, as Count Marcello tells him, “Venetians never tell the truth. We mean precisely the opposite of what we say.” Berendt meets people whose families lived through a thousand years of Venetian history. He speaks with a variety of people who make their homes in grand palaces and in tiny cottages. There is the Plant Man, the wealthy rat-poison genius, the fearless and much feared Venetian prosecutor who unravels the mystery of the Fenice fire, the celebrated artist who schemes to get himself arrested, the well-known Venetian poet who commits suicide, the politicians struggling to point the finger of blame for the Fenice fire away from themselves, the former mistress of Ezra Pound, and the woman who may or may not have stolen her family legacy. Berendt spins a suspenseful tale out of the threads of many stories—some directly connected to the fire, others not. He finds chaos, corruption, and crime are as characteristic of Venice as its winding canals. With a compelling combination of curiosity and equanimity, Berendt presents an intimate look at a community of natives and expatriates as multifaceted as the colors reflected in the Fenice fire and in the artwork designed to commemorate it.

A CONVERSATION WITH JOHN BERENDT

Midnight in the Garden of Good and Evil and The City of Falling Angels are both multi-list bestsellers and widely acclaimed books. Have you been surprised by their success? What do you think attracts people to your work?

My best guess is that what appeals to readers most in both books are the characters. Time magazine said I had become “a state-of-the-art weirdo magnet.” What they meant was that the people I write about tend to be very strange. They are, in fact, eccentrics. I love eccentrics. I see them as artists. Their masterpieces are their own lives.

Midnight in the Garden of Good and Evil marked your style of nonfiction as unique and groundbreaking. Now, The City of Falling Angels brings Venice alive for readers the way Midnight did for Savannah, Georgia. What do you think the major hallmarks of your writing style are?

I write in the form of what has been called, the New Journalism, or Narrative Nonfiction, or even Literary Nonfiction. Simply put, I write true stories in the style of short stories and novels. I use the literary techniques of fiction writers: extended dialogue, detailed descriptions, the imposition of a narrative structure with action moving from scene to scene.

The huge media buzz that Midnight in the Garden of Good and Evil created turned you into a kind of celebrity. How do you think the attention from social and gossip columnists has affected your work as a journalist? Did you find that you were as easily recognized by face or name while in Italy?

What notoriety I gained from all the publicity has proved to be a double-edged sword. It has made some people very eager to be interviewed by me and others afraid and standoffish. I was not as easily recognizable by face and name in Italy as in America, but Midnight was quite well known there, as both a book and a film (under the name Mezzanotte nel giardino del bene del male).

The incredible timing of your trip to Venice, which landed you in the city just days after the burning of the Fenice, gave you the perfect opportunity to create a central thread for The City of Falling Angels. How much of a role did coincidence play in the gathering of information for this book?

Coincidence has been a major factor in the researching of both my books. While I was living in Venice, I always carried a small notepad in my back pocket; I figured I was on duty as a journalist day and night. I would see people in the street who interested me, and I’d engage them in conversation. I’d hear a remark that would send me off in an unexpected direction. My approach in the research phase was to be flexible, to follow my hunches without always knowing where they would lead.

Several prominent and not-so-prominent Venetians express their concern about the rising water levels in Venice. Have you formed an opinion about the issue after hearing so much about it? How do you think the problem can be solved?

Yes, I do think it can be solved. The technology is there. The only uncertainty is exactly how fast the water is rising and whether the proposed plan of moveable dikes is the best solution or only a short-term fix. Other than that, there is always the problem that Italians are congenitally unable to make up their minds. Sometimes that’s a good thing, however.

On page 218, you write, “when you attach yourself to famous people . . . you become part of their story.” As a writer, how do you determine which people rotating in the orbit of famous personalities or powerful individuals are worth writing about, insofar as their stories are important to the “big picture?” How do you choose which stories to weave together when creating a book like The City of Falling Angels?

It’s always a question of whether the ancillary character makes a good story. In the chapter referred to here, the character rotating in an orbit around a famous person appealed to me because her story embodied a theme that runs throughout the book: the uses of the past, or as one character puts it, “the shameless exploitation of the corpse.” There was also the literary link between her story and Henry James’s The Aspern Papers, a relationship I found irresistible.

In Italy, as in other European countries, it seems more common for families to be able to trace their ancestry back for many generations. From your experience with the people of Venice, what do you think it does to a person’s perspective on family relationships, on politics, and on life in general when one is able to point at a family tree, like Francesco da Mosta’s, and see so far back in time?

Venetians who can trace their lineage back hundreds of years feel almost a physical connection to Venice, to its history and culture. And the longer the family line the greater feeling of pride.

There are so many wonderful aspects of Venice to love and enjoy. After spending so much time there, what attracts you the most to the city? How many years in all did you live there? What was it like returning to the United States afterward? Did you suffer from culture shock?

I lived in Venice on and off for a period of nine years—starting a few days after the Fenice fire in 1996, and ending when I was finished with the book and the opera house was rebuilt, in 2005. The city’s magical beauty and its air of unreality are the aspects of Venice I love most.

The loss of the Fenice Opera House is important to the story of The City of Falling Angels and to the history of Venice. Have there been any new developments in the case surrounding its burning or its reconstruction?

The only news about the Fenice is that Enrico Carella, one of the two young men who were convicted of arson in the fire, is still a fugitive; his whereabouts are unknown. The other man, his cousin Massimiliano Marchetti, has been in jail three years (as of September 2006) and is expected to be released within a year.

Of all the stories you tell in The City of Falling Angels, why did you choose to end by returning to the Seguso family and the Maestro’s “Fenice” glass collection?

The Seguso story was one of my favorites, and since I opened the book with it, I felt I should close the circle by ending with it as well.

Count Marcello tells the Save Venice board, “to work and operate in Venice means first of all to understand its differences and its delicate equilibrium.” After completing this book, do you feel that you have achieved Marcello’s standard?

The Venetians are a very Byzantine people. They thrive on mystery, intrigue, and ambiguity. I understand all that, but it doesn’t mean I always understand the hidden meaning of things—or that they do either.