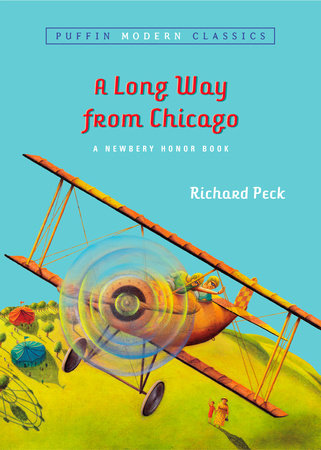 Young readers who live in age-segregated suburbs need the wisdom, and the wit, of elders. After all, this is a young generation who no longer even have to write thank-you notes for gifts from grandparents. They rob themselves of their own histories and are once again at the mercy of each other.

But stories are better than that. They champion the individual, not the mass movement. They mix up the generations. They provide a continuity growing hard to come by. And laughter. Best of all, laughter.

Every summer from 1929-1935, in A Long Way from Chicago, Joey Dowdel and his younger sister, Mary Alice, are sent to spend a week with their grandmother in her small Illinois town located halfway between Chicago and St. Louis. Not even the big city crimes of Chicago offer as much excitement as Grandma Dowdel when she outwits the banker, sets illegal fish traps, catches the town’s poker playing business men in their underwear, and saves the town from the terror of the Cowgill boys. Now an old man, Joe Dowdel remembers these seven summers and the “larger than life” woman who out-smarted the law and used blackmail to help those in need.

Richard Peck has written over twenty novels, and in the process has become one of America’s most highly respected writers for young adults. A versatile writer, he is beloved, by those in middle school as well as young adults, for his mysteries and coming-of-age novels. In addition to writing, he spends a great deal of time traveling around the country attending speaking engagements at conferences, schools and libraries. He now lives in New York City.

Mr. Peck has won a number of major awards for the body of his work, including the Margaret A. Edwards Award from School Library Journal, the National Council of Teachers of English/ALAN Award, and the 1991 Medallion from the University of Southern Mississippi. Virtually every publication and association in the field of children’s literature has recommended his books, including Mystery Writers of America, which twice gave him their Edgar Allan Poe Award.

Once in a while in a long writing career, one character rises off the page and takes on special life. So it happened with Grandma Dowdel in A Long Way from Chicago and again in A Year Down Yonder. Meant to be larger than life, she became all too lifelike. The letters came in at once: “Was she YOUR grandmother”, they ask? Did my own grandmother fire off both barrels of a shotgun in her own front room? Did she pour warm glue on the head of a hapless Halloweener? Did she spike the punch at a DAR tea? Well, no. Writers aren’t given much credit for creativity.

Yet writing is the quest for roots, and I draw on my earliest memories of visiting my grandmother in a little town cut by the tracks of the Wabash Railroad. It was, in fact, Cerro Gordo, Illinois. I use that town in my stories, though I never name it, wanting readers to think of small towns they know.

The house in the stories is certainly my grandma’s, with the snowball bushes crowding the bay window and the fly strip heavy with corpses hanging down over the oilcloth kitchen table, and the path back to the privy.

I even borrow my grandmother’s physical presence. My grandmother was six feet tall with a fine crown of thick white hair, and she wore aprons the size of Alaska. But she wasn’t Grandma Dowdel. When you’re a writer, you can give yourself the grandma you wished you had.

Perhaps she’s popular with readers because she isn’t an old lady at all. Maybe she’s a teenager in disguise. After all, she believes the rules are for other people. She always wants her own way. And her best friend and worst enemy is the same person [Mrs. Wilcox]. Sounds like adolescence to me, and even more like puberty.

But whoever she is, she’s an individual. Young readers need stories of rugged individualism because most of them live in a world completely ruled by peer-group conformity.

A Year Down Yonder

Al Capone Does My Homework

Al Capone Shines My Shoes
Back to Top