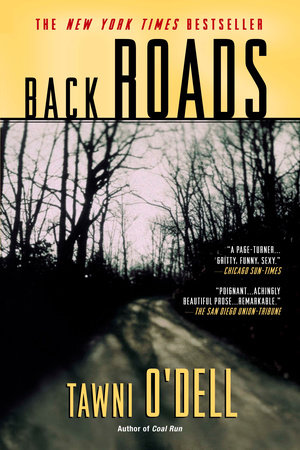 INTRODUCTION
Praised as “hilarious, moving, and deeply disturbing,” (Mademoiselle) this extraordinary debut novel features one of the most unforgettable voices to emerge in recent years, as we enter the world of Harley Altmyer, a nineteen-year-old in rural Pennsylvania struggling to raise his three younger sisters after his mother goes to jail for his father’s murder.“One day you’re that guy who’s happy he managed to survive high school and get that almighty piece of paper, and you’re thinking you might try to get a job at Redi-Mix concrete where your dad’s worked since the beginning of time. And at least you’ve got a family you can stand even if they are all sisters.

One day you’re that guy, and the next day you’re assigned to a social worker and a therapist and given the choice of either being a LEGAL ADULT with three DEPENDENTS or an ORPHAN with NOBODY.”

—From Back RoadsHarley Altmyer should be in college drinking Rolling Rock and chasing girls. He should be freed from his closed-minded, stricken coal town, with its lack of jobs and no sense of humor. Instead, he’s constantly reminded of just how messed up his life is.

With his mother in jail for killing his abusive father, Harley is an orphan with the responsibilities of an adult and the fiery, aggressive libido of a teenager. Just nineteen years old, he’s marooned in the Pennsylvania backwoods caring for his three younger sisters, whose feelings about him range from stifling dependence to loathing. And once he develops an obsession with the sexy, melancholic mother of two living down the road, those Victoria’s Secret catalogs just won’t do the trick anymore. He wants Callie Mercer so badly he fears he will explode. But it’s the family secrets, the lies, and the unspoken truths that light the fuse and erupt into a series of staggering surprises, leaving what’s left of his family in tatters. Through every ordeal, the unforgettable Harley could never know that his endearing humor, his love for his sisters, and his bumbling heroics would redeem them all.

Funny and heartbreaking, Tawni O’Dell’s pitch-perfect characters capture the maddening confusion of adolescence and the prickly nature of family with irony and unerring honesty. Back Roads is a riveting novel by a formidable new talent.

Tawni O’Dell, a western Pennsylvania native, earned a degree in journalism from Northwestern University. In addition to earning wages as a bank teller and a waitress, she put herself through college working as an exotic dancer jumping out of cakes at bachelor parties. A mother of two, she lives with her husband in Illinois. Back Roads is her first novel.

Learn More About Back Roads
print

The Year of Fog

When These Mountains Burn

The Truants
Back to Top