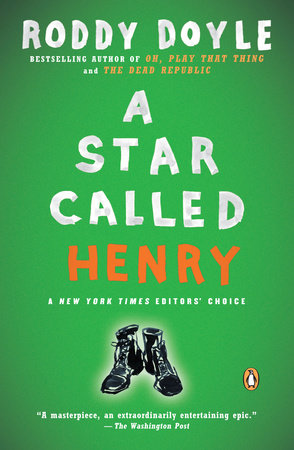 Born in the slums, raised on the streets, caught up in the fight for a free Ireland at the age of fourteen, Henry Smart is, indisputably, a survivor. A Star Called Henry describes the first twenty years of Henry’s adventure-filled life in early twentieth-century Ireland. Using a compelling first-person fictional narrative, Booker Prize-winning author Roddy Doyle lets Henry tell his own story, revealing this young man’s heroism, as well as the tumultuous era in which he lived.

Henry stood out from the moment he was born. “I glowed guaranteed life,” he boasts. In Ireland’s tuberculosis-ridden slums in the early 1900s, healthy babies were rare. But beyond this gift, there is little in Henry’s life to call miraculous. His father works as bouncer and a hit man at a local brothel. He has a wooden leg, which he uses as a weapon as well as a prosthesis. Henry’s mother is already old at age twenty, beaten down by poverty and by the deaths of so many of her children. Henry’s name is the same as one of these dead babies, and neither parent can bring themselves to use it. “I was Henry but they never called me that,” Henry explains. “She wouldn’t; he couldn’t . . . . So they called me nothing.”

Denied the use of his name as well as any material or maternal comforts, Henry ends up, by age three, spending most of his time on the streets, accompanied by his beloved younger brother, Victor. Life is marginally better here than in their home, until the day that the “rozzers” (police) nearly catch him after he heckles the King of England. Henry’s father spots his sons running away and leads them to an escape route he knows well—the rushing underground rivers of the Dublin sewers. After this, Henry never sees his father again, though the sewers prove useful to him many times in the future. Henry’s father leaves him another gift—his spare wooden leg. The leg will become his constant companion, aiding him in the service of war, romance, and disguise, long after he leaves home.

On the streets Henry learns to stay alive by taking advantage of whatever situation presents itself: he sells rats to rich men for betting races, he herds cattle for drovers, he learns to pick pockets. As the seeds of rebellion take hold in the city, Henry eagerly offers his services. He is paid to pour tar on cows owned by absentee landlords and sells week-old newspapers to Dubliners hungry for news of uprisings.

Henry’s life is soon dominated by Irish politics. The early 1900s was a period of tumult for Ireland. The nationalist movement was gaining momentum backed by the guerilla warfare tactics of the newly-former I.R.A. Henry’s strength, toughness, and street smarts are a useful resource to the Irish rebel leaders, including the renowned real-life rebel, Michael Collins. Collins, Padraig Pearse, and James Connelly use Henry to train young fighters and to blow up buildings. Eventually, Henry becomes an assassin for the republic, wielding the wooden leg as a murder weapon.

Though exhilarated by the excitement of his work and the cause, Henry is too smart to ignore the hypocrisies of the revolutionaries and his own tenuous role in the activities. “I was shaping the fate of my country, . . . but, actually, I was excluded from everything. . . . the men of the slums and hovels . . . were nameless and expendable . . . We followed orders and murdered.”

As the turmoil of the era surges around Henry, he continually searches for camaraderie, love, family, and identity in the midst of the chaos. He gravitates towards female warmth, from his own mother’s sad affection, to the women who can’t resist his handsome physique, to his affair with the love of his life, the schoolteacher-turned-rebel Miss O’Shea.

Will Henry find some peace in his hard-edged existence? A Star Called Henry gives some hints, but this novel is really only the beginning of the Henry Smart story. Roddy Doyle plans to make Henry’s tale a trilogy. Since this young man is such a survivor, his life promises to be a long one, bursting with adventures enough to fill at least two more novels.

PRAISE FOR A STAR CALLED HENRY

“Doyle vividly portrays the wild passions of an Irish Everyman . . . [and] the birth of the modern Irish nation.” —Time

“Brilliant . . . ferociously powerful; Doyle captures the desperation of the slums with the intimate authenticity of a poet.” —The Boston Globe (front page review)

“Stunning . . . not only Doyle’s best novel yet; it is a masterpiece, an extraordinarily entertaining epic.” —The Washington Post

Roddy Doyle is the author of six novels. The first three—The Commitments, The Snapper, and 1991 Booker Prize nominee The Van—are available both single and in one volume as The Barrytown Trilogy, published by Penguin. In 1993 Paddy Clarke Ha Ha Ha won the Booker prize and became an international bestseller. Doyle’s next novel was the acclaimed The Woman Who Walked Into Doors which was also a bestseller and was followed by A Star Called Henry. Doyle has also written for the stage and the screen: the playsBrownbread and War; the film adaptations of The Commitments (as co-writer), The Snapper, and The Van; Stolen Nights (an original screenplay); the four-part television series Family for the BBC; and the television play Hell for Leather. Roddy Doyle is also the author of the children’s book The Giggler Treatment. He lives in Dublin.

Charlotte Gray
Back to Top