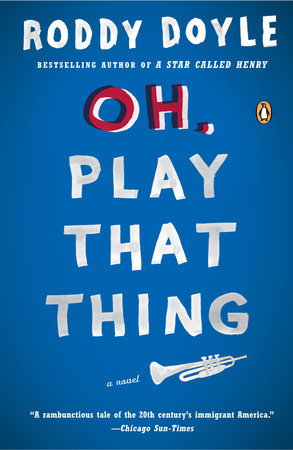 INTRODUCTION
With his sequel to A Star Called Henry, Roddy Doyle continues the story of the infamous yet irresistible Henry Smart. An extraordinary man to be sure, Henry is also every man who ever hoped for a different kind of life and a better future.

When Oh, Play That Thing opens it is 1924, and Henry is sailing into New York Harbor. His job in Dublin now finished, this is Henry’s chance for a fresh start, to leave his murderous past behind and begin life anew: “America was everything possible,” he says.

Indeed, things for Henry do start out with promise. His many “talents” combined with his unsurpassed survival instinct make finding work easy—the hard part is staying out of trouble. Despite his desire for a fresh start, Henry is unable to keep the dark side of the world at bay and soon realizes that leaving Dublin was not the end of his running but the beginning, as he enters a race against time for his own survival.

Henry moves from place to place, making one narrow escape after another, always landing on his feet and reinventing himself each time. In Chicago, he befriends the great Louis Armstrong, on the cusp of stardom, and becomes Armstrong’s “white man.” When the “hard guys” are on his heels again, he returns to New York—Harlem this time—still at Armstrong’s side. But the ghosts of Henry’s past just won’t let go, and before long he’s on the run again, crisscrossing America in pursuit of his life, his liberty, and his elusive wife, Miss O’Shea.

Telling Henry’s epic story in his distinctive, captivating writing style, Roddy Doyle takes us breathlessly and effortlessly between two worlds, the Dublin of Henry’s past and the cities and towns of America—very different places yet ironically very much the same. As Henry discovers, you can leave a place, but your past comes along with you.

Roddy Doyle is an internationally bestselling writer. His first three novels—The Commitments, The Snapper, and the 1991 Booker Prize finalist The Van—are known as The Barrytown Trilogy. He is also the author of the novels Paddy Clarke Ha Ha Ha (1993 Booker Prize winner), The Woman Who Walked into Doors, and A Star Called Henry, and a non-fiction book about his parents, Rory & Ita. Doyle has also written for the stage and the screen: the plays Brownbread, War, Guess Who’s Coming for the Dinner, and The Woman Who Walked Into Doors; the film adaptations of The Commitments )as co-writer), The Snapper, and The Van; When Brendan Met Trudy (an original screenplay); the four-part television series Family for the BBC; and the television play Hell for Leather. Roddy Doyle has also written the children’s books The Giggler Treatment, Rover Saves Christmas, and The Meanwhile Adventures and contributed to a variety of publications including The New Yorker magazine and several anthologies. He lives in Dublin.

The Rain Before It Falls

The Autograph Man
Back to Top