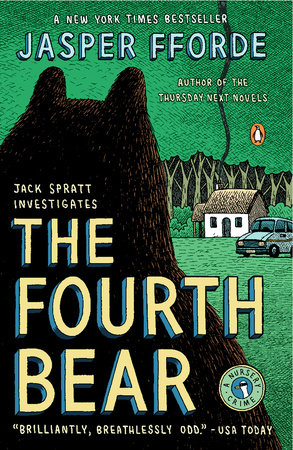 INTRODUCTION
A serial killer made of gingerbread, aliens who get tipsy on binary code transmissions, a used-car salesman named Dorian Gray with a pristine automobile and a deadly guarantee–it’s all in a day’s work for Detective Chief Inspector Jack Spratt; his contrarian partner, Mary Mary; and the ragtag crew of the Nursery Crime Division. This time, the world’s most brutal serial-killer confection, the Gingerbreadman, has managed to escape St. Cerebellum’s secure hospital for the criminally deranged. After twenty years of falsely peaceful incarceration, he’s looking for revenge against Jack, the officer who barely escaped with his life during the Gingerbreadman’s initial arrest. But numerous suspensions and public speculation about Jack’s mental state have forced Superintendent Briggs to place Jack on medical leave, leaving the case in the incapable hands of the friendly but incompetent David Copperfield.

Meanwhile, the Nursery Crime Division’s most vocal adversary, columnist Josh Hatchett of The Toad, declares a truce with Jack. His sister, Henrietta, a fussy journalist with blond ringlets who also goes by the nickname Goldilocks, has disappeared. She had been on the verge of uncovering a big story that would help further her pet “right to arm bears” cause. A breadcrumb trail of clues leads Jack from a house of three porridge- abusing bears to a small group of fringe scientists growing enormous vegetables and eventually to an unfinished theme park owned by the secretive QuangTech corporation, where he discovers Goldilocks’s body parts.

But who had it in for her? Was it a fourth savage, porridge-mongering bear who ran away from the crime scene? Was she a victim of the competitive cucumberista farmers protecting the oversized fruits of their labor? Or was it an associate of her ambitious secret politician lover? Jack is clearly the only man who can solve this mystery. That’s because nursery crimes aren’t just his jurisdiction; they’re a part of his life. Jack has known about his own Dubious Reality status since his first poetic marriage to a fat-eating wife–a fact he’s never been able to admit to his beloved second wife, Madeleine.

After five years of trying to hide his true nature from Madeleine, and under pressure from his abusive PDR (Persons of Dubious Reality) neighbors Punch and Judy, Jack finally spills his secret to Madeleine, who feels betrayed and hurt by his duplicity. Dismissed by his boss, shunned by his wife, hunted by the murderous Gingerbreadman, and thwarted by the reclusive ursine community, Jack must unravel the mystery of the fourth bear before his own couplet comes to an untimely end.

Jasper Fforde plays with the literary figures in the canon the way children play with toy figurines, creating full-scale imaginary worlds from scraps of children’s literature. But he doesn’t just use the nursery crime pun for laughs–Fforde carves away the cute rhymes to reveal the dark heart at the center of Western culture’s childhood tales. His whimsical, vividly imagined remixes of these well-known fairy tales would have made the brothers Grimm proud.

Jasper Fforde traded a varied career in the film industry for staring vacantly out of the window and arranging words on a page. He lives and writes in Wales. The Eyre Affair was his first novel in the bestselling Thursday Next series. The Big Over Easy is the first in his new Nursery Crime series.

Learn More About The Fourth Bear
print
Back to Top