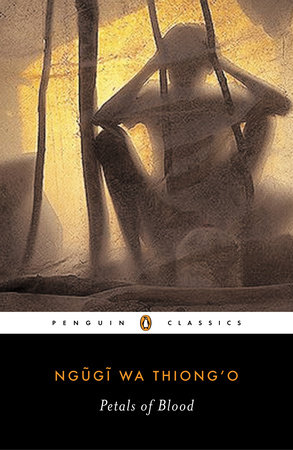 The Mau Mau rebellion, as it is often called, which began in Kenya in the early 1950s, was a nationalist, anticolonial armed resistance against the British colonial state. The guerrilla movement called itself the Kenya Land Freedom Army; the British dubbed the movement “mau mau,” a meaningless name, to obscure the aims otherwise so clear in the resistance army’s name. Ngugi Wa Thiongío’s Petals of Blood examines, among other things, the betrayal by the postcolonial regime of the ideals of this anticolonial struggle that helped Kenya achieve its independence.

The novel revolves around three men and a woman. The four friends reveal different aspects of their history to each other piecemeal, just as their families had guardedly explained the past to them. The lingering effects of the Mau Mau revolt have affected all their lives and by the end of the novel, each character is wrapped up in his or her own exclusive epiphany about life in Kenya.

Abdullah, the trader, thinks he failed the movement because he did not avenge the death of a friend who was a revolutionary and who was betrayed. Munira, the schoolteacher and eventual wide-eyed prophet, is paralyzed by the shadow of his successful father, who condemned the Mau Mau but aided the crony corruption of independent Kenya. Wanja, the beauty from a broken home, learns that it was two generations of revolutionary fervor that distorted the home she grew up in. And Karega, Thiongío’s union-pushing hero, scrutinizes the history of Mau Mau as if it were a sacred text. Somewhere in that history, they all believe, is the key to wisdom and justice.

No one reading Petals of Blood can doubt Thiongío’s faith in the power of national myths. But, like Faulkner writing about the American South or Shakespeare writing about England, he also understands how our obsessions with them can ennoble citizens but also can transform them into something grotesque. The messages of Petals of Blood can be as opaque as the history of Kenya, but in that it reflects the relationship most of us have with our own national mythos.

Ngugi lived through the wrenching cultural change he writes about in Petals of Blood. His parents separated when he was a boy, and his education veered from one centered on Kenya’s native Gikuyu language to instruction in English. It was under English schooling that Ngugi fell in love with writing—he emphasizes Robert Louis Stevenson’s Treausure Island as a book that “set my imagination flying.” A gifted child, Ngugi gained admission to an elite high school, and there he became politically radicalized. His whole life was filtered through his Christian faith, his campaigning for more Afrocentric education, and his obsession with writing. In 1955, he returned home from school to a less cerebral agitation: his home village had been ripped apart by an antiguerrilla campaign.

Ngugi’s mother would be tortured for three months because of her suspected collaboration with the guerrillas. It is a testament to Ngugi’s faith in the power of education that, faced with trauma like this, he threw himself into his studies and continued to distinguish himself academically. At Uganda’s Makerere University Ngugi edited magazines, wrote fiction and plays, and became a columnist for Kenya’s flagship newspaper the Daily Nation. After graduating from Makerere, he attended Leeds University in England, where he was introduced to Marxist and anticolonial writers.

Ngugi’s fierce intellect as well as his ideas on labor and African authenticity made him a professional star. In the late ’60s, he became the first African lecturer in Nairobi College’s English department, and eventually moved the department’s emphasis from English to literature in languages from across the African diaspora. He began publishing award-winning novels, and in 1970 he started Petals of Blood, which he finished five years later at the Soviet Writers Union in Yalta.

At the 1977 book launch for Petals, Kenyan Vice President Mwai Kibaki (Kenya’s current president) cited his own attendance as evidence that Kenya was a defender of free speech. But that same year, Ngugi was detained for a year “for possessing banned books.” While in detention, writing parts of a new book on toilet paper, his youngest child was born, and was dubbed Wamuinigi by locals of his hometown: “she who belongs to the people.”

Ngugi faced harassment thereafter but never again as seriously. In the mid-’80s, he began writing in the Gikuyu language of his family and his first school, and has continued to the present. Today he is an A-list academic, making the rounds at prestigious English departments around the world.

In 1959 Ngugi made a life-changing train journey to Uganda; it was the first among may journeys that would lead him away from home and from the landscape, the people, the country he loved. He left behind a country wracked by the war the Kenya Land Freedom Army, also called Mau Mau, was waging against the mighty colonial government. It was a war that touched the popular imagination and was forever to change the fate of Kenya and many other countries under British rule. For the first time peasants, the wretched of the earth, were taking the war to a highly sophisticated country with a long military history. Many expected the revolt to end quickly. Britain would triumph. It did not, despite the state of emergency laws and a particularly brutal military campaign, well-captured in one of Ngugi’s books: “It was a period of mass trials, mass murder, and mass torture of Kenyans.”

The name Mau Mau made hearts tremble with dreams, hope, and fear. Ngugi’s elder brother joined the fighters, his mother was arrested and tortured, and his village was razed to the ground. The Mau Mau leader, Dedan Kimathi, took on almost mythical proportions for Ngugi and for many Kenyans. After all, he was said to turn into a bird, a stone, a white man, anything. Only those who have grown up in war-ravaged times know deep down that wars never end; they just mutate and live on in other forms. For Ngugi that war still goes on, and the mission born of it has made literature that much richer. Reading Ngugi is like feeling a fire, scorching your psyche, your heart, your being. —Moses Isegawa, from the Introduction

Winter in the Blood

Foe
Back to Top