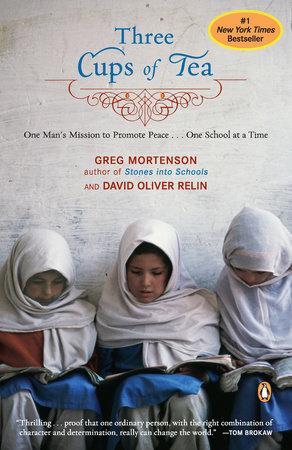 Three Cups of Tea is the true story of one of the most extraordinary humanitarian missions of our time. In 1993, a young American mountain climber named Greg Mortenson stumbles into a tiny village high in Pakistan’s beautiful and desperately poor Karakoram Himalaya region. Sick, exhausted, and depressed after a failing to scale the summit of K2, Mortenson regains his strength and his will to live thanks to the generosity of the people of the village of Korphe. Before he leaves, Mortenson makes a vow that will profoundly change both the villagers’ lives and his own—he will return and build them a school.

The book traces how Mortenson kept this promise (and many more) in the high country of Pakistan and Afghanistan, despite considerable odds. The region is remote and dangerous, a notorious breeding ground for Al Qaeda and Taliban terrorists. In the course of his work, Mortenson was kidnapped and threatened with death. He endured local rivalries, deep misunderstandings, jealousy, and corruption, not to mention treacherous roads and epic weather. But he believed passionately that balanced, non-extremist education, for boys and girls alike, is the most effective way to combat the violent intolerance that breeds terrorism. To date, Mortenson’s Central Asia Institute has constructed fifty-five schools, and his work continues.

Mortenson initially approached Karakoram as a climber and he never lost the mountaineer’s appreciation for the region’s austere beauty and incredible physical challenges. His coauthor David Oliver Relin deftly evokes high-altitude landscapes haunted by glaciers, snow leopards, and the deaths of scores of climbers. As Mortenson transformed himself from down-and-out climbing bum to the director of a humanitarian enterprise, he came to appreciate more and more deeply the struggles that people of the region endure every day—struggles that have intensified with the recent explosion of war and sectarian violence.

In the course of this narrative, readers come to know Mortenson as a friend, a husband and father, a traveling companion, a son and brother, and also as a flawed human being. Mortenson made enemies along the way and frustrated his friends and family. Relin does not shy away from depicting the man’s exasperating qualities—his restlessness, disorganization, sleeplessness, and utter disregard for punctuality. But Mortenson never asks others to make sacrifices that he has not already made himself time and time again.

The war-torn mountains of Pakistan and Afghanistan appear in the news as the breeding grounds of terrorist training camps, Al Qaeda hide-outs, and fierce religious extremism. In Three Cups of Tea, Mortenson and Relin take readers behind the headlines to reveal the true heart and soul of this explosive region and to show how one man’s promise might be enough to change the world.

Greg Mortenson is the director of the Central Asia Institute. A resident of Montana, he spends several months of the year in Pakistan and Afghanistan.

David Oliver Relin is a contributing editor for Parade magazine and Skiing magazine. He has won more than forty national awards for his work as a writer and editor.

Guests of the Sheik

The Supreme Commander
Back to Top