The Autobiography of an Ex-Colored Man Reader’s Guide 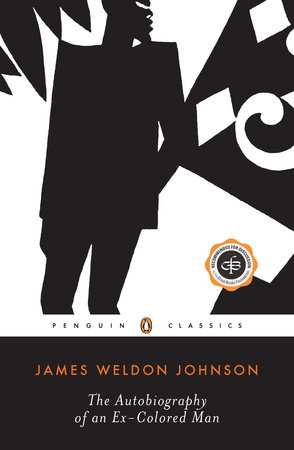 The Autobiography of an Ex-Colored Man Reader’s Guide

print
The Autobiography of an Ex-Colored Man Reader’s Guide

A reader who has not been told that James Weldon Johnson’s The Autobiography of an Ex-Colored Man is a novel can be forgiven for not knowing how to classify it. When it was first published, anonymously, in 1912, the book included a preface from the publisher, written almost exactly as Johnson proposed, that described it as a “new picture of conditions brought about by the race question in the United States” (p. xxxiii). The preface suggests that what follows is a sociological study. But in the novel’s first paragraph, the unnamed narrator tells us that he is “divulging the great secret” of his life, moved by “the same impulse which forces the un-found-out criminal to take somebody into his confidence” (p. 1). This beginning prepares us for a confessional narrative such as those by St. Augustine or Jean-Jacques Rousseau. Exemplifying the capacity of novels to absorb other genres, The Autobiography of an Ex-Colored Man is a sociological study in terms of its analysis of the dynamics of race, class, and geography, and a confessional narrative, albeit a fictional one. But it is as a novel that Johnson’s book engages us most urgently, in that the story of its narrator’s life is ultimately a plea for the reader’s understanding.

The narrator’s great secret, which he reveals early in the book, is that he is not white, although his skin is light enough for him to pass as white. For some years, this had been a secret even from the narrator. He only learns the truth because his teacher asks him to sit down when she calls on the white students in the class to stand for the principal. When he gets home and asks his mother if he is white, or if she is, she tells him they are not. She will only say of his white father, whom the narrator has never met, that he is “one of the greatest men in the country” and that the narrator has in him “the best blood of the South” (p. 12). At the end of the novel, the narrator has decided to live as a white man; the meaning of his decision is the central question of the book.

If the narrator’s comparison of himself at the beginning of the novel to an “un-found-out criminal” implies guilt, the novel’s last sentence could be taken as the most succinct confession of his crime: “I have sold my birthright for a mess of pottage” (p. 154). Investing in real estate in New York, he has gained a measure of wealth, but he has given up his goal of expressing “the joys and sorrows, the hopes and ambitions, of the American Negro, in classic musical form” (p. 108) and abandoned the cause of elevating blacks in the eyes of whites.

His musical aspirations begin to form when, as a child, the narrator is discovered to be a piano prodigy, but his dedication proves questionable at best. He is repeatedly diverted from whatever direction his life is moving in, an element of the novel that raises the question of whether the narrator’s life reflects the operations of chance on human intention or his inability to fully assume a coherent identity. The most important instance of these changes of direction occurs when the narrator appears most likely to commit himself to his music. Inspired by the powerful spirituals and orations he has heard at a rural church meeting, he leaves with one of the participants, intending to take a train from the man’s nearby town and “settle down to work” (p. 133). Instead, he ends up witnessing a horrific scene in the town—a black man burned alive by an angry white mob. This experience propels the narrator to live as a white man, overcome with shame “at being identified with a people that could with impunity be treated worse than animals” (p. 139).

In contrast with the narrator’s celebration throughout the novel of the achievements of African Americans and their contributions to American culture, this pivotal moment suggests the ambiguities of the narrator’s thoughts about race. His musical ambition can be seen as an attempt to integrate and artistically represent the black and white halves of his heritage, in that he wants to merge the musical forms of African Americans with the classical music of European composers. But the narrator frequently seems to accept a white, often racist perspective on the world in general and on blacks in particular. He says that he has never forgiven the teacher who first led him to understand he was black. In his travels through the South, his observations are often consistent with those of a typical white racist, such as when he notes the “unkempt appearance, the shambling, slouching gait, and loud talk and laughter” of the lower-class blacks that he meets (p. 40). He also admits that he “never exactly enjoyed” the sight of a rich white widow and her black companion at a club in New York City (p. 79). After taking part in a debate about race among several white passengers on a train, the narrator expresses his admiration for the most racist of the other men. Perhaps the most extreme example of the narrator’s willingness to adopt the most racist of white attitudes toward blacks is his relationship to the millionaire who pays him to play the piano. Though the narrator considers him a friend and benefactor, the millionaire “loaned” the narrator out to his friends and made the narrator play until he rose from his chair and said, “That will do” (p. 88).

Given the difficulty of ascertaining the narrator’s attitude toward race, what kind of sense are we to make of his decision to pass for white? Does he elicit sympathy or scorn? He seems to want his life to appear tragic. When the narrator happens to see his father at an opera house in Europe, he assumes the girl with his father is his half-sister and suddenly feels “the desolate loneliness” of his position (p. 98). He has to restrain himself from screaming to the audience that in their midst is “a real tragedy” (p. 98). If the narrator’s life is tragic, perhaps this is because he is without an identity—unable to be either white or black or both. Not knowing who he is, he lives as if he were born an exile, never a part of any community.

But Johnson fosters the suspicion that what the narrator truly considers tragic is the fact that he is not white. At the end of the novel’s first paragraph, the narrator tells us he wishes to “gather up all the little tragedies” of his life and “turn them into a practical joke on society” (p. 1). Is the joke the deception he has perpetrated, or is he unwittingly the victim of society’s joke, unable to free his mind from being dominated by a white world despite his knowledge of who he is? The iceberg that the narrator sees as he sails to Europe with his millionaire friend seems to perfectly capture the elusiveness of the meaning of his situation: “it glistened like a mammoth diamond” and “constantly changed its shape” (p. 93). It is also white, of course, but part of it is submerged. Does it represent the narrator? Or is the narrator the “stranded polar bear” (p. 93) he remembers seeing in pictures of icebergs from grammar school—although he sees no polar bear on this one? By becoming an “ex-colored man,” the narrator has turned inside out the American penchant for self-invention, choosing instead self-negation. If much more than the narrator’s name remains unknowable, perhaps this is because Johnson wished to represent the endless complexity that inevitably attends issues of race in America.

A man of extraordinarily varied accomplishments, James Weldon Johnson was born in 1871 in Jacksonville, Florida, the son of a schoolteacher and a headwaiter at a luxury hotel. After attending Atlanta University, Johnson returned to Jacksonville to become a principal of the high school from which he had graduated. He studied law while a principal and was admitted to the Florida bar. In 1900, Johnson wrote the song “Lift Ev’ry Voice and Sing,” set to music by his brother John Rosamond, for a school celebration of Lincoln’s birthday. The song’s popularity grew until, some twenty years later, it was adopted by the National Association for the Advancement of Colored People (NAACP) as “the Negro National Hymn.” In 1901, Johnson joined his brother in New York, where, along with Bob Cole, they enjoyed a reasonably successful career writing songs for Broadway shows.

Johnson gave up songwriting in 1906 to become United States consul to Venezuela; he was transferred to Nicaragua in 1909. It was while he held these posts that he wrote his only novel, The Autobiography of an Ex-Colored Man, which he published anonymously in 1912. Favorably reviewed but unremarkable in its sales, the book was assumed by most readers to be nonfiction. Johnson returned to New York in 1913 to oversee the editorial page of the New York Age, an African American weekly. In 1916, he was named the national organizer for the fledgling NAACP and became the first black man to head the organization in 1920, greatly increasing its membership and influence by employing his talent for bringing together people of different ideological stances.

In 1927, Johnson published his most acclaimed book of poems, God’s Trombones: Seven Negro Sermons in Verse, which was inspired in part by the summer he spent as a college student in rural Georgia instructing the children of former slaves. That same year, he published a second edition of his novel, this time acknowledging his authorship. Although he declared it a work of fiction, the book was often taken as his autobiography, which prompted him to tell his own story in Along This Way(1933). Among the books he edited, the Book of American Negro Poetry (1922) is one of the most important to emerge from the Harlem Renaissance and a milestone in the history of African American literature.

After retiring from his position at the NAACP in 1930, Johnson was named the Spence Chair of Creative Literature at Fisk University in Nashville, Tennessee. He died in an automobile accident in 1938.

Learn More About The Autobiography of an Ex-Colored Man
print

The Sport of the Gods

Jazz
Back to Top