The Song of the Lark Reader’s Guide 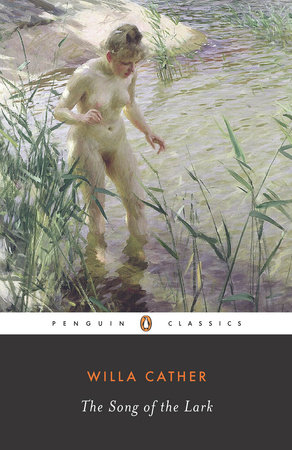 The Song of the Lark Reader’s Guide

print
The Song of the Lark Reader’s Guide

The Song of the Lark is the story of an artist’s growth and development from childhood to maturity. More particularly—and decidedly more rarely—it traces the development of a female artist supported by a series of male characters willing to serve her career. Inspired by Willa Cather’s own development as a novelist and by the career of an opera diva, The Song of the Larkexamines the themes of the artist’s relationship with family and society, themes that would dominate all of Cather’s best fiction.

Thea Kronborg is a Scandinavian-American singer who works her way up from the dusty desert town of Moonstone, Colorado, to the boards of the Metropolitan Opera house. Although Willa Cather herself was not a musician, the portions of the novel covering childhood, apprenticeship, and artistic awakening in the western landscape are frankly autobiographical. Its final section, dealing with Thea’s professional life, is drawn largely from the career of the Wagnerian soprano Olive Fremstad, who was the kind of artist Willa Cather still aspired to be. For although Cather was forty-two when The Song of the Lark was published in 1915, it was only the third of her twelve novels, and belongs to the early stage of her distinguished literary career. After its publication, however, the great literary critic H. L. Mencken said that it placed Cather in “the small class of American novelists who are seriously to be reckoned with.”

Thea, like Olive Fremstad, comes of Swedish-Norwegian stock and is the musical daughter of a Methodist minister, obliged to give lessons and play and sing at the prayer meetings and revivals. Most of the other details of her youth, however, are drawn directly from Cather’s own experience. Like Cather, Thea is one of seven children growing up in an overcrowded little house in Moonstone, Colorado, a small western town that resembles Cather’s own hometown, Red Cloud, Nebraska. Her parents recognize and respect their daughter’s unusual gifts, but her more conventional siblings and neighbors think of Thea as spoiled, rebellious and stuck-up. Her refuge is a tiny room in the high-windowed gable of the attic, a rose-papered bower where she can read, write, and dream in peace.

Thea’s closest friends are a handful of adult men who appreciate her qualities and are themselves restless or unhappy in Moonstone. All have counterparts in Cather’s life: the chivalrous, self-educated railroad brakeman Ray Kennedy, who loves to explore cliff ruins, combines features of her brother Douglass and his railroading friends. Professor Wunsch, the romantic, alcoholic piano teacher, is a sympathetic portrait of Herr Schindelmeisser, an itinerant musician Cather knew in Red Cloud; while the wild mandolin player Spanish Johnny was inspired by the musical Mexicans Cather had met in Arizona. Thea’s most important childhood friend, the town physician, Dr. Howard Archie, was modeled on Dr. G. E. McKeeby, with whom Cather assisted as a teenager on prairie housecalls.

When Thea leaves home to study music in Chicago, she manages to remain oblivious to the city itself, with its bustling crowds, brilliant shops, and obnoxious loitering men. What grips her imagination is a Jules Breton painting in the Art Institute called “The Song of the Lark,” depicting a peasant girl standing in a field, arrested by the song of a meadowlark. The image reinforces an even more important revelation in the concert hall, when Dvorák’s New World Symphony reveals to Thea a link between the landscape in her memory and the musician she wants to become. From that moment she understands what she wants, and she leaves determined that “as long as she lived that ecstasy was going to be hers. She would live for it, work for it, die for it; but she was going to have it, time after time, height after height.”

Thea’s first teacher in Chicago, a sensitive, one-eyed Hungarian violinist named Harsanyi, discovers her voice, and steers her away from piano to the voice teacher Madison Bowers. But Thea’s demands and ambition are beyond Bowers’ reach or interest, and his cynicism and slovenly standards make her depressed and surly. She finds both a champion and a romantic interest in the musical dilettante Fred Ottenburg.

Thea’s full artistic awakening does not take place in the cold gray canyons of Chicago, where she labors at her music lessons, but in a brilliant desert canyon where Fred sends her to rest and recuperate. There she comes upon an isolated gorge sheltering silent prehistoric ruins and spends weeks lying alone on the sunbaked rock ledges and in the shade of ancient pueblo rooms. Enfolded in the shelter of the canyon she sheds restrictive clothing and mental debris, bathes naked in the stream at its base, naps under an Indian blanket, and opens every pore until her body becomes completely receptive, a vehicle of sensation. Thus poised, she suddenly recognizes the spiritual connection between the shards of ancient Indian pottery she finds in the stream—vessels designed to bear life-giving water—and her own throat, a vessel which carries song: “what was any art but an effort to make a sheath, a mould in which to imprison for a moment, the shining, elusive element which is life itself?. . . In singing, one made a vessel of one’s throat and nostrils and held it on one’s breath, caught the stream in a scale of natural intervals.”

From here on, Thea views her vessel, her body, as part of the sacred order of things. Her daily bath in the stream in Panther Canyon “came to have a ceremonial gravity. The atmosphere of the canyon was ritualistic.” To Thea, the vessel bearing spiritual gifts deserves to be treated sacramentally. Becoming an artist means being able simultaneously to abandon her body to sensuous experience and to control that experience, keeping it from contamination. “The condition every art requires,” Cather would later explain, is “freedom from adulteration and from the intrusion of foreign matter,” and at this point, Thea severs those human ties that threaten to compromise her.

The mature Thea Kronborg we meet in the novel’s last section is ten years older than the young woman who came of age in Panther Canyon. She has returned from study and successful performances in Germany, and is now a reigning soprano at the Metropolitan Opera. The diva Thea Kronborg, whose first name means “gift of God” and surname means “crown fortress,” is presented as a woman both blessed and isolated by her divine gift. Her professional crown is won by the resolute defense of her person as the vehicle through which that gift can be perfected and returned. Her family, mentors, and suitors serve Thea the woman only as they serve Thea the artist. She is completely obsessed with the intellectual and physical rewards of her craft. Her regimen is grueling, and her exacting standards make her arrogant and lonely. She is sometimes frightened, and more than once the idea of marrying and being taken care of tempts her. She grieves at the conflict between personal and professional needs, particularly when choosing an important European debut over a journey home to see her dying mother.

But art always comes first. It takes every ounce of strength, leaving her drained, aged, and often unfit for company. When urged to take more time for her “personal life,” she replies, “Your work becomes your personal life. You’re not much good until it does.” Her work requires the kind of perfect dedication that Nietzsche called chastity, and its goal is a paradox, the kind of “sensuous spirituality” which is also the goal of the mystic.

In this novel of an artist’s single-minded pursuit of beauty, Cather made one of her most eloquent statements about the artistic vocation. Although the claims of personal attachments are made persuasively at times in The Song of the Lark, it is clear that for Cather the serious artist must renounce these claims and in an environment of solitude labor to fulfill the dreams of creation.

Willa Cather was born on December 7, 1873 in Back Creek Valley, Virginia, the eldest child of Charles and Mary Cather, both descendants of established Virginian families. Her childhood was reportedly happy and well-ordered, and is remembered in her late novel Sapphira and the Slave Girl. In 1883, the Cathers moved to Webster County, Nebraska, joining members of the family who settled there earlier. This crucial move, dislocating and dramatic, introduced Cather to the landscape and to the ways of life she would memorialize in her famous prairie novels, O Pioneers!, My Ántonia, and A Lost Lady, as well as in parts of The Song of the Lark. In the small town of Red Cloud, Nebraska, Cather was a notably energetic, intelligent, and outspoken child, while, as her novels show, the town often seemed to her repressive. In Lincoln, Nebraska, where she attended the state university, she began her journalistic career, writing numerous reviews for the local newspapers. There, too, she published her earliest stories, formulated her idealistic and romantic ideals about art, and nurtured her literary ambitions. Those ambitions had to wait for their fulfillment while she earned a living in Pittsburgh as journalist and teacher, and then in New York as an editor for McClure’s Magazine. With the publication of O Pioneers! in 1913, Cather became the dedicated writer of her own dreams, in time achieving recognition for her prairie novels and for rare and unique works such as The Professor’s House, Death Comes for the Archbishop, and Shadows on the Rock. She led an ordered life, writing stories, novels, and critical essays, traveling regularly, and maintaining valued friendships, among them with neighbors from her childhood, as well as with famous writers and musicians. She was honored for her writings, receiving the Pulitzer Prize in 1923 for One of Ours, a novel about a soldier in World War I. She died at her New York home on August 24, 1947.

Learn More About The Song of the Lark
print

Summer
Back to Top