The Tale of Genji Reader’s Guide 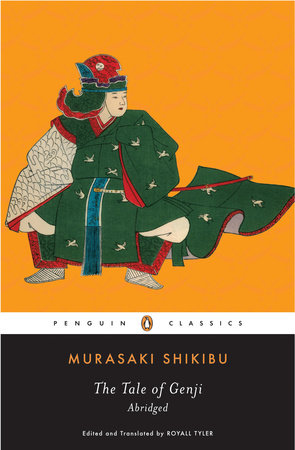 The Tale of Genji Reader’s Guide

The Tale of Genji, written a thousand years ago in Japan, is a great masterpiece of world literature. Although not the oldest surviving example of prose fiction, it may well be the first novel ever written. In The Progress of Fiction, the British novelist Clara Reeve (1729-1807) distinguished the novel from the romance and wrote, “The Novel is a picture of real life and manners, and … gives a familiar relation of such things as pass every day before our eyes…. [It] represent[s] every scene in so easy and natural a manner … as to deceive us into a persuasion (at least while we are reading) that all is real, until we are affected by the joys or distresses of the persons in the story as if they were our own.” Her words describe The Tale of Genji. Remarkably, Murasaki Shikibu, the tale’s author, was also a woman.

Murasaki Shikibu (973?-1014?) was born into the middle level of the Japanese aristocracy. In about 1006 she was called to serve the Empress of the time, perhaps because she wrote such good stories. Nobody knows just when she began her Tale or when she finished it, but what remains of her diary alludes to the work as it existed in 1007 or 1008, and she has been recognized ever since as the author of all fifty-four chapters. Unfortunately, no manuscript survives from her time. The earliest known text dates from about 1200.

Murasaki Shikibu wrote above all for the Empress, her patron, and through her for other members of the highest aristocracy. A great lady did not normally read a story silently by herself. Instead, she listened while one of her women read it aloud and she herself looked at the pictures. Murasaki Shikibu may well have read some chapters in person to the Empress, and she certainly wrote her tale in that spirit. The Tale of Genji is ostensibly told by a female narrator (perhaps more than one) whose language often suggests that she is addressing a superior.

The tale features several unforgettable major heroines, such as Fujitsubo, Murasaki (apparently the source of her creator’s name), Akashi, Rokujo, and Ukifune, as well as many striking minor ones. However, the thread that holds things together is the life of Genji, the hero. Genji is an Emperor’s son by a relatively low-ranking lady who dies not long after his birth. Even as a boy, Genji is extraordinarily beautiful and gifted, but his father, who longs to appoint him Heir Apparent, understands that the court would never accept his doing so. He therefore decides to make Genji a commoner, so that Genji can at least serve the realm in due course as a senior official.

The tale often highlights the social boundary that separates a commoner from someone imperial, but for the rest of his life Genji will hover between the two worlds, and this will give him, as a fictional hero, a particularly wide scope. To free him further from the constraints of the commonplace, the author also gives him practically unlimited material means. In the first dozen or so chapters, the young Genji becomes entangled in a dazzling assortment of love affairs that range from broad comedy to disaster. The most agonizing of them is his relationship with his father’s Empress—the princess whom his father married explicitly in order to seek solace after the death of Genji’s mother. Genji was told as a child that this lady closely resembled his mother, and he fell deeply in love with her. In time she bears a son who is really Genji’s, not Genji’s father’s, and this boy eventually accedes to the throne. When, years later, he learns the secret of his birth, he decides to honor his real father by appointing Genji Honorary Retired Emperor, even though Genji has never reigned. This step, which in the author’s time could be taken only in fiction, brings Genji to an unheard-of pinnacle of glory. Meanwhile, he finds his lifelong love and companion (Murasaki) in a beautiful niece of his father’s empress, someone who closely resembles that empress and therefore Genji’s late mother herself. This theme—the hero’s nostalgia for his lost mother—has fascinated many readers.

Genji’s rise to ultimate glory marks a turning point, and soon his world begins slowly to crumble around him. Murasaki comes to feel estranged from him, though he will not let her go. Then her death destroys him. In the last chapter in which he appears, he is only a shell of what he once was, and past the end of that chapter he dies, too. The remaining third of the book picks up the story some eight years later. It now centers on a young man, Kaoru, whom the world accepts as Genji’s son, although in reality he is not. Kaoru has nothing like Genji’s stature. The mood of this last third of the tale is dark with intimations of betrayal and failure, so much so that Kaoru has seemed to many readers a remarkably modern hero. The tale ends at last on an inconclusive note, one that leaves many wondering “what happened next.” Only the reader’s imagination can provide an answer. The genius of The Tale of Genji is all the more impressive because the author had few models to work from. Many things about the lives of the characters—the clothes they wore, the kinds of houses they lived in, their pastimes, their rules of deportment, and so on—are of course unfamiliar now, but their feelings, motives, and experiences are recognizable to anyone. Love, ambition, pride, anguish, bitterness, and disappointment affect us all, and The Tale of Genji presents them with a freshness of insight that has made it famous for its psychological immediacy. It is a rich and astonishing work.

Murasaki Shikibu, born in 978, was a member of Japan’s Fujiwara clan, which ruled behind the scenes during the Heian Period by providing the brides and courtesans of all the emperors. Lady Murasaki’s rare literary talent, particularly her skill as a poet, secured her a place in the court of Empress Akiko. After the death of her husband, she cloistered herself to study Buddhism, raise her daughter, and write the world’s first novel Genji Monogatari, the tale of the shining Prince Genji.

Royall Tyler was born in London, England, and grew up in Massachusetts, England, Washington D.C., and Paris. He has a B.A. in Far Eastern Languages from Harvard, and an M.A. in Japanese History and Ph. D. in Japanese literature from Columbia University. He has taught Japanese language and culture at, among other places, Ohio State University, the University of Wisconsin, and the University of Oslo, in Norway. Beginning in 1990, he taught at the Australian National University, in Canberra, from which he retired at the end of 2000. He will spend the American academic year 2001-02 as a Visiting Professor at Harvard.

Royall Tyler and his wife Susan live in a rammed earth house on 100 acres in the bush about seventy miles from Canberra, where they breed alpacas as a hobby.

Royall Tyler’s previous works include Japanese Noh Dramas, a selection and translation of Noh plays published by Penguin;Japanese Tales and French Folktales, anthologies published by Pantheon; and The Miracles of the Kasuga Deity, a study of a medieval Japanese cult published by Columbia University Press.

Learn More About The Tale of Genji
print
Back to Top