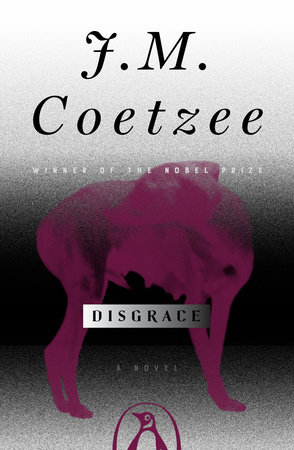 Set in post-apartheid South Africa, J. M. Coetzee’s searing novel tells the story of David Lurie, a twice divorced, 52-year-old professor of communications and Romantic Poetry at Cape Technical University. Lurie believes he has created a comfortable, if somewhat passionless, life for himself. He lives within his financial and emotional means. Though his position at the university has been reduced, he teaches his classes dutifully; and while age has diminished his attractiveness, weekly visits to a prostitute satisfy his sexual needs. He considers himself happy. But when Lurie seduces one of his students, he sets in motion a chain of events that will shatter his complacency and leave him utterly disgraced.

Lurie pursues his relationship with the young Melanie—whom he describes as having hips “as slim as a twelve-year-old’s”—obsessively and narcissistically, ignoring, on one occasion, her wish not to have sex. When Melanie and her father lodge a complaint against him, Lurie is brought before an academic committee where he admits he is guilty of all the charges but refuses to express any repentance for his acts. In the furor of the scandal, jeered at by students, threatened by Melanie’s boyfriend, ridiculed by his ex-wife, Lurie is forced to resign and flees Cape Town for his daughter Lucy’s smallholding in the country. There he struggles to rekindle his relationship with Lucy and to understand the changing relations of blacks and whites in the new South Africa. But when three black strangers appear at their house asking to make a phone call, a harrowing afternoon of violence follows which leaves both of them badly shaken and further estranged from one another. After a brief return to Cape Town, where Lurie discovers his home has also been vandalized, he decides to stay on with his daughter, who is pregnant with the child of one of her attackers. Now thoroughly humiliated, Lurie devotes himself to volunteering at the animal clinic, where he helps put down diseased and unwanted dogs. It is here, Coetzee seems to suggest, that Lurie gains a redeeming sense of compassion absent from his life up to this point.

Written with the austere clarity that has made J. M. Coetzee the winner of two Booker Prizes, Disgrace explores the downfall of one man and dramatizes, with unforgettable, at times almost unbearable, vividness the plight of a country caught in the chaotic aftermath of centuries of racial oppression.

Born in Cape Town, South Africa, on February 9, 1940, John Michael Coetzee studied first at Cape Town and later at the University of Texas at Austin, where he earned a Ph.D. degree in literature. In 1972 he returned to South Africa and joined the faculty of the University of Cape Town. His works of fiction include Dusklands, Waiting for the Barbarians, which won South Africa’s highest literary honor, the Central News Agency Literary Award, and the Life and Times of Michael K., for which Coetzee was awarded his first Booker Prize in 1983. He has also published a memoir, Boyhood: Scenes From a Provincial Life, and several essays collections. He has won many other literary prizes including the Lannan Award for Fiction, the Jerusalem Prize and The Irish Times International Fiction Prize. In 1999 he again won Britain’s prestigious Booker Prize for Disgrace, becoming the first author to win the award twice in its 31-year history.

“—Disgrace is not a hard or obscure book—it is, among other things, compulsively readable—but what it may well be is an authentically spiritual document, a lament for the soul of a disgraced century.”
—The New Yorker

“—A subtly brilliant commentary on the nature and balance of power in his homeland…Disgrace is a mini-opera without music by a writer at the top of his form.”
—Time

“—Mr. Coetzee, in prose lean yet simmering with feeling, has indeed achieved a lasting work: a novel as haunting and powerful as Albert Camus’s The Stranger.”
—The Wall Street Journal