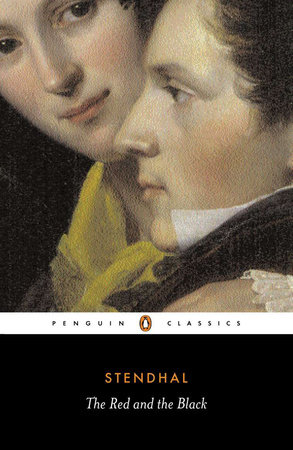 print
The Red and the Black Reader’s Guide

In The Red and the Black, Stendhal paints a sweeping portrait of early nineteenth-century France—its social classes, professions, politics, and manners—in Paris and the provinces. The novel’s characters represent virtually every level of intelligence and sensibility, in a plot involving passion, intrigue, satire, and last-minute reversals. Changing scene and focus so often that it has frequently been called “cinematic,” the novel is held together by Julien Sorel, whose life provides its structure. Julien leaves his provincial home to become a tutor, strives to raise himself professionally and socially, becomes embroiled in a series of romantic escapades, and finally faces a capital trial. Until Stendhal chose the enigmatic phrase Le rouge et le noir as the title just before the book’s publication, he called the novel Julien. Although Julien is indisputably the novel’s central character, whether we should see him as a hero is an open question. At the end of the novel, Stendhal places us in the same position as the jury at Julien’s trial, in effect asking us to evaluate Julien and compare our verdict with the court’s.

Unlike omniscient narrators in the novels of George Eliot or Anthony Trollope, Stendhal’s is a playful, often ironic presence rather than a reliable touchstone. The narrator of The Red and the Black declares his “intention is to flatter no one” (p. 58), a statement in keeping with the novel’s epigraph “Truth, the bitter truth.” However, “truth” proves far from straightforward. The epigraph is attributed to Georges Jacques Danton, the proponent of the French Revolution who was later guillotined, but Danton may never have said it. Many of the epigraphs that open each chapter are either very loose renditions of quotations or outright fabrications. Further, the narrator’s moods and opinions prove almost as changeable as those of the characters, who frequently argue with themselves and change their minds two or three times within a chapter. Thus the narrator, after one of the first interviews between Julien and Mme. de Rênal, the married provincial woman who is Julien’s first love, breaks in to say, “I confess that the weakness displayed by Julien in this soliloquy gives me a poor opinion of him” (p. 151). Yet in the novel’s second half, when Julien muses over his affair with Mathilde de La Mole, the narrator remarks, “It was an inherent flaw in his character to be extremely sensitive to his own failings” (p. 346). The narrator consistently responds to Julien, but responds inconsistently.

Stendhal seems to question the very possibility of truth in this novel, presenting characters who tirelessly interpret and reinterpret their own and others’ actions—and who are often proved wrong. Reading itself is implicated in this process, as the characters compare events to books they have read, expecting life to imitate art. Julien is an avid reader with quixotic tendencies; in Julien’s first scene in the novel, his father knocks his beloved copy of the Memorial of St. Helena, a biography of Napoleon, into the sawmill stream (p. 25). Throughout the novel, the story of Napoleon is central to Julien’s idea of himself as a man of merit who can aspire to success despite his low birth. He draws almost all of his ideas, and many of his feelings, from his reading. When offered the position of tutor to the Rênals’ sons, his “horror of eating with the servants” is “borrowed…from Rousseau’s Confessions” (p. 28). While seducing Mme. de Rênal, he must “fortify himself by studying the inspired book [Memorial of St. Helena] that tempered and re-tempered his soul” (p. 61). In this respect, Mathilde de La Mole is his female counterpart. She takes her ideas of aristocratic grandeur from the family legend of Queen Marguerite, and when she thinks she has fallen in love with Julien, she pages through an internal card catalogue: “She mentally reviewed all the descriptions of passion she had read in Manon Lescaut, La Nouvelle Héloïse, Letters of a Portuguese Nun, etc., etc.” (p. 325). The novel’s portrayal of such bookishness is complex. The narrator blames it for destroying the “freedom of spirit” necessary for sincere love (p. 89), but he also takes great delight in the absurdities generated when characters are playing parts in separate dramas, declaring that “nothing could be more amusing” (pp. 361-362) than Julien and Mathilde’s mutual misunderstanding.

The novel’s most crucial action, Julien’s shooting of Mme. de Rênal for writing a letter to M. de La Mole exposing their affair, stems from Julien’s idea of himself as an actor in a heroic drama. From his imprisonment until the end of the book, the question is whether Julien will find truth—his true self, his true love—before his execution. For the first time in the novel, the two women he has romanced, Mme. de Rênal and Mathilde de La Mole, are brought together. Mme. de Rênal embodies the simplicity and sincerity associated with the unspoiled aspects of the countryside, while Mathilde partakes of the sophistication and role-playing associated with Paris. Julien must choose between them as he chooses what to say at his trial. At the age of twenty-three, he must make a reckoning of his life and decide how to face death.

At his trial, Julien declares to the jury that if he is executed it will be in order to “discourage for ever that class of young men who, born into an inferior class…have the good luck to obtain a good education and the audacity to mix in what the arrogance of the rich calls Society” (p. 505). To what extent does Stendhal intend us to accept this, and to what extent does he fault Julien’s own arrogance and impulsiveness? As his execution nears, Julien thinks that “I have loved truth…Where is truth?…Everywhere hypocrisy, or at least charlatanism, even among the most virtuous, even among the greatest;…No, man cannot put his trust in man” (pp. 522-523). Yet even here the novel presents multiple ways of understanding his statement. Is Julien a man who finally “sees clearly into his own soul” (p. 525)? Or is he playing yet another part, that of the doomed but heroic young man declaiming against society, as he seems to suggest when he cries out that “two steps away from death, I am still a hypocrite” (p. 524)?

Beyond the figure of Julien himself, Stendhal’s presentation of a social world frequently dominated by lying, cheating, and stealing offers a hint of the author’s possible intentions. In the course of the novel it is clear that the provinces, the seminaries, and the city are fundamentally alike in the types of behavior they breed and frequently reward. This multilayered, endlessly intriguing novel ends appropriately with Stendhal’s dedication of the novel “To the happy few.” We are left to determine the identity of the “few,” the source and nature of their happiness, and whether we count Julien—and ourselves—among them.

“Stendhal” was the pen name of Henri Marie Beyle, born in Grenoble on January 23, 1783. He came from a solidly middle-class family; his father was a barrister and his mother the daughter of a physician. His mother died when he was seven, and he grew to adore her memory and hate what his father represented to him—bourgeois manners and the pursuit of money. Feeling trapped in his home, the boy developed a vivid imagination and a taste for daydreaming.

At the age of seventeen, Stendhal went to Paris and soon joined Napoleon’s army in Italy. Here, and in Paris after he resigned from the army in 1801, he enjoyed a number of romantic liaisons. He joined Napoleon’s Ministry of War and later followed the emperor on campaigns in Germany and Russia. After Napoleon’s defeat, Stendhal left for Italy and settled in Milan. He began to write books about art and music, and first used the pseudonym “Stendhal”—taken from a town in Prussia where an art critic he admired had been born—in 1817.

He returned to Paris in 1821 and frequented its salons and theaters. He wrote a number of books in the next several years, including his first novel, Armance (1827), and Le rouge et le noir (1830). He was appointed Consul to Trieste after the 1830 revolution, and was soon sent to the town of Civitavecchia, outside Rome. Though he did not publish new works during this time, he wrote Souvenirs d’ égotisme and began two books he did not complete—Lucien Leuwen, a novel, and Vie de Henri Brulard, an autobiography. All three were published posthumously. In 1836, he returned to Paris due to ill health and there, in 1838, dictated La Chartreuse de Parme (1839), one of the two novels for which he is best known, in just fifty-two days.

Stendhal’s health began to deteriorate sharply in early 1841, when he suffered an attack of apoplexy. He died of a stroke on March 23, 1842. During his lifetime, his fiction was little appreciated. Just before Stendhal’s death, Honoré de Balzac published an article in praise of La Chartreuse de Parme, but it was many years before critics recognized Stendhal’s works as worthy enough to set beside those of Balzac and Gustave Flaubert.

Benjamin Constant, Adolphe (1816)
Recognized as one of the earliest novels in the modern psychological tradition, Adolphe depicts its young hero’s romantic and political coming of age.

Henry Fielding, The History of Tom Jones, a Foundling (1749)
This picaresque, bawdily humorous novel follows the adventures of a young orphan as he seeks a place in the world.

Gustave Flaubert, Madame Bovary (1857)
An acknowledged masterpiece, Madame Bovary anatomizes both its adulterous title character and the bourgeois society that bred her.

Johann Wolfgang von Goethe, The Sorrows of Young Werther (1774)
Famous for spurring a rash of suicides among suggestible young readers, this story of a sensitive youth driven to despair by the world’s harshness is one of the landmarks of the romantic movement in literature.

Laurence Sterne, A Sentimental Journey through France and Italy (1768)
The tale of Yorick, a man of tender feelings exploring Europe, was one of the most popular eighteenth-century “sentimental” novels, composed in its author’s trademark digressive, playful prose.

Learn More About The Red and the Black
print

An Absence So Great

Joan: A Novel of Joan of Arc

The Girl in the Flammable Skirt

Peter Pan
Back to Top