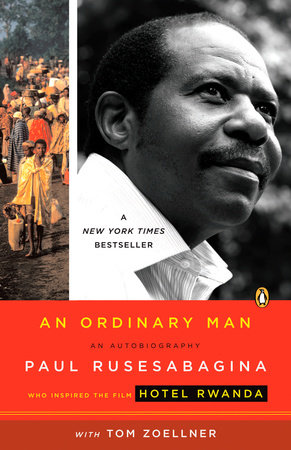 INTRODUCTION
Paul Rusesabagina believes he survived history’s fastest-moving genocide simply because he acted as if things were normal. As a hotel manger during Rwanda’s murderous spring of 1994, Rusesabagina navigated a world of mass murder with the internal compass he used to steer through office politics.

When a crazed army officer barged into the Hotel Des Milles Collines, Rusesabagina treated him much as he would any angry hotel guest. He offered the man a drink, and then deferred to every statement his guest made. And finally, when the man had calmed down, Rusesabagina suggested a solution that might make all parties happy. Rusesabagina’s now legendary work of protecting himself and the hotel’s guests was, in a way, just damage control on a sublime level. He bet his own life on his belief that, even in the midst of a genocide, most people are only a conversation away from their normal selves.

This may seem a very strange belief for a contemporary Rwandan to hold. Before 1994, the exceptionally courteous population of this tiny, beautiful African country seemed anything but dangerous, but behind their smiles, Rwandans nursed deep political and historical grievances. Angry talk shows on the radio stoked long-held resentments against the Tutsi minority. On April 4, 1994, when the Rwandan president’s plane was shot down, chaos erupted. Neighbor began attacking neighbor, and a killing spree began that would eventually claim the lives of at least half a million people in the space of just a few months.

But Rusesabagina clung to his confidence in the power of language. Even when the streets were littered with corpses, he patiently continued talking until each killer in front of him turned into just a man, open to making a deal.

An Ordinary Man makes clear that the most famous hero of the Rwandan genocide survived above all because of his strength of character and his capitalist wits. Rusesabagina had originally trained to be a pastor, but as an industrious young man, he decided there was little opportunity in the clergy and instead found a career in a multinational corporation. This author’s lifesaving tools were to be found in his leather-bound book of professional contacts.

Toward the end of An Ordinary Man, Rusesabagina resigns himself to the fact that he cannot fully answer his children’s questions about what the history of the genocide means. “The only thing I am able to do is keep talking to them,” he writes. It’s a neat distillation of Rusesabagina’s philosophy: evil remains in the world, but an ongoing discussion will keep us grounded.

Paul Rusesabagina was the first Rwandan manager of the Hotel Milles Collines, a European-owned luxury hotel in Rwanda. A recipient of the National Civil Rights Museum’s 2005 Freedom Award, he lives in Brussels, Belgium.

A CONVERSATION WITH PAUL RUSESABAGINA

Q. Your book suggests that you did nothing extraordinary: “I was doing the job I was entrusted to do by the Sabena Corporation—that was my greatest and only pride in the matter.” Do you think you are understating the exceptional courageousness and intelligence of your work during the genocide?

A. Not at all. If I was able to save lives, it was only because I had some useful tools at my disposal. I had a five-story building in which to hide people. I had a cooler full of beer and wine with which to bribe the killers. I had some cash to spread around when alcohol wouldn’t work. And I had ten years worth of friendship with some of the perpetrators of the killings. So they knew who I was and were willing to listen to my line of reasoning. Anybody else with this kind of advantage could have done what I did.

Q. You describe standing on the hotel’s roof at dawn and preparing for your likely death. What effect did moments like that have on your decisions at the time, and how have they affected your life since the genocide?

A. They made me realize just how short life is, and how precious the small pleasures of life can be. I regretted not spending more time appreciating the little things in my life that could have brought me such happiness: the smell of a fresh summer morning, my wife’s smile, the taste of good coffee, the laughter of my children. It also brought me face-to-face with a central truth of life. Some of the only things that really matter in this world are the sacrifices we make for other people. Our chance to make a difference in this world is so slim. We have to take advantage of every opportunity put before us. That is why I have resolved to enjoy each and every minor pleasure of life, and have resolved to speak for as long and as well as I can about the importance of staying sane and compassionate in the face of insanity.

Q. Before the genocide, why were you drawn to radio broadcasts that screamed nonsense about the evils of Tutsis?

A. Part of it was my job. As the manager of the best hotel in Rwanda, I had to stay informed about what the nation was saying to itself. There is also a strange fascination with rhetoric that grows more and more ludicrous. You almost expect it to be revealed as a joke. But in this case it was not a joke. I still had to tune in. We never accomplish anything when we shut out our adversaries. You have to know what people are saying in order to argue against their points of view.

Q. Why was the Rwandan genocide the fastest one in history?

A. More than eight hundred thousand people were killed in less than one hundred days. It was not done with gas chambers and bullets, but with clubs and machetes and simple agricultural tools. The monstrous efficiency was due to a few factors: the power of the media to whip up people’s hatred, the carefully organized structure of Rwandan government and society, and the streak of obedience that runs through my culture. Often during the 1994 genocide, the Tutsi and moderate Hutu waited silently at roadblocks for their turn to be slaughtered. Many accepted their fate without a peep of protest. We have a deep-seated respect for authority figures in my country. Those who were ordered to kill their neighbors often asked no questions. This is not something of which to be proud. But it has happened in every other culture that has fallen prey to genocidal madness.

Q. How important was your training as a hotel employee in your survival during the genocide?

Q. Do you think the leaders of the world have really learned anything since the genocide in 1994?

A. I would like to say yes, but the continuing inaction in Darfur has been sickening. What is happening there is exactly what happened in Rwanda, only at a slower pace. The United States has branded it a genocide, but has done nothing concrete to save lives. The international community has not been aggressive enough in making Sudan accountable for the slaughter in its own territory.

Q. How do you feel about your newfound celebrity?

A. I have very mixed feelings. I am certainly not the only one who refused to accommodate the killers. There are so many people in Rwanda who risked their lives to save strangers, and many of them died as a result. We will never know all their names or completely appreciate the sacrifices they made. I wish my country had never had this stream of hatred flowing through it. If there is any good in all the attention that has come to the events at the Hotel Des Milles Collines, it is the opportunity I now have to spread a very simple message—that ordinary people all over the world have the power to defeat evil. All that it takes is kind words and simple decency.

Q. Your organization supports “children of bad memories,” whose mothers were raped or killed during the genocide. In general, how are these children doing, more than a decade later?

A. These children are now emerging into adolescence. Many of them grew up without that most basic need: a mother’s love. This has left a lot of them resentful and alienated. I worry about these young men and women. It will take much love and effort to ensure they have a sense of meaning and purpose. They did nothing to deserve their fate. I fear that they may be susceptible to the same kind of nihilism and poisonous rhetoric that mesmerized so many Rwandans in the spring of 1994. But it doesn’t have to be this way. As I have kept saying, the tools of evil can also be converted into tools for good. Machetes can also chop mangos for hungry people. We can still make a difference in Rwanda.

Q. You have been a hero to many people. But who are your own heroes?

A. I think the two men I have admired most are my father and Nelson Mandela. My father, Thomas Rupufre, was a quiet man, but a very strong man. He was a banana farmer who never learned how to read, but I think he was one of the wisest men who ever lived. He always spoke with a calm heart and with a sense of dignity. I never once heard him raise his voice or lose his temper. But we always listened to him carefully in our family. He taught me the tremendous power of words. And Mandela showed the world the power of forgiveness and reconciliation. He had every reason to hate his adversaries. But he chose a better path. It was because of him that the people of South Africa were able to sit around a table and talk. We need more of that today in Rwanda. Perhaps we will not be the best of friends. It may be too early for that. But we might be able to at least talk to one another.

Until We Are Free
Shirin Ebadi

Seven Years in Tibet
Heinrich Harrer
Back to Top