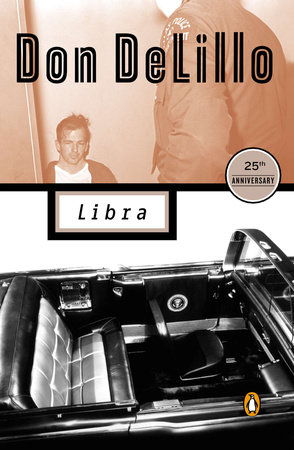 Libra, Don DeLillo’s ninth novel, is a fictional account of how the lives of Lee Harvey Oswald and John Fitzgerald Kennedy intersected in Dallas. Like most works of historical fiction, the book plunges attentive readers back into the history and politics of the era through its intermingling of real and fictional characters, events actual and imagined.

In the events leading to the catastrophe at Daley Plaza, we are confronted by a stew of historical interpretation that has continued to froth and bubble since November 22, 1963. Scholars and cranks of many persuasions have tried to sort out the conflicting testimonies; hundreds of narratives now compete for attention, alternately identifying the CIA, J. Edgar Hoover’s FBI, Fidel Castro, anti-Castro Cuban insurgents, and the Mafia as shadowy players in the game. One of the plotters in DeLillo’s novel, a disgruntled CIA veteran burned by the Bay of Pigs debacle, imagines, “Someday this operation would be studied at the highest levels of intelligence in Langley and the Pentagon” (p. 147). Nicholas Branch, hired by the CIA to write a secret history of the event, confirms that judgment with his observation, “Here is a crime that clearly yields material for deep interpretation” (p. 434).

The assassination of presidents is nearly as American an institution as apple pie: four presidents have been killed, and six others narrowly escaped violent death. The raw statistics of this reality violate the self-image of the United States as a virtuous republic; indeed, our presidents’ chances of encountering a murderous assailant are a little less than one in four. Yet the murder of JFK is unique among traumas that have gripped the American collective imagination, largely because questions have dogged the official Warren Commission report since its release in 1964. Was the killing the work of a lone gunman, or of several? The killing was planned, but by whom, and what motive could have seized the mind—or minds—of its planners? Toward the end of Libra, one conspirator is struck with awe by the audacity of the plans to kill the president of the United States: “Wayne was amazed that an idea like this could even exist in America” (p. 380).

But, of course, ideas like this can and do exist in America. DeLillo’s novel, like Dreiser’s An American Tragedy or Dos Passos’s U.S.A. trilogy, suggests that the multiplicity of ideas spawned by the republic seldom narrows down to one theme or note. Heroism, courage, seething resentment, and the unpredictable crack of the rifle—all kinds of possibilities inhabit the vast panoply of American experience. But it is DeLillo who, more than any other contemporary American writer, comprehends the peculiar signature of evil in a media-saturated age. Midway through the novel, Nicholas Branch muses on the aftereffects of those pivotal moments in Dallas: “After Oswald, men in America are no longer required to lead lives of quiet desperation. You apply for a credit card, buy a handgun, travel through cities, suburbs and shopping malls, anonymous, anonymous, looking for a chance to take a shot at the first puffy empty famous face, just to let people know there is someone out there who reads the papers” (p. 181).

Some critics have accused DeLillo of fueling an unhealthy American obsession with conspiracy theories, of adding to the frequently irresponsible speculation that surrounds the shooting of the thirty-fifth president. But Libra extends far beyond official history. DeLillo insists that the novel be read as fiction; in the author’s note at the novel’s conclusion, he says he has “made no attempt to furnish factual answers to any questions raised by the assassination.” Elsewhere, commenting on the contagious popularity of conspiracy theories, especially those promoted by Hollywood, DeLillo dismisses enthusiasts for this kind of speculation as liable to “a particular type of nostalgia: the nostalgia for a master plan, the conspiracy which explains absolutely everything.”

DeLillo’s novel moves episodically and nonchronologically through events ranging from Lee Harvey Oswald’s childhood in the Bronx to the actual mayhem of Kennedy’s death in Jackie’s blood-drenched lap. We eavesdrop on the meetings of a ragtag bunch of former intelligence operatives and cowboys, and listen to Oswald’s voluble mother, Marguerite, offer parental perspective on a son gone bad. If the novel proves psychologically satisfying, it is not because it provides a blueprint of what really happened, but because the inner lives of its many characters take shape and substance in the closely rendered details of everyday life. Without surrendering to a simple or mechanical account of causality, DeLillo shows us with careful nuance why people do what they do at any particular moment.

DeLillo’s Oswald is a Libra trying to figure out which way to go in the balance of things: will he act out of a sense of inner-directedness or merely react to the strange chain of events that seems like fate? In this character, we are confronted with the mystery at the heart of Kennedy’s assassination. While it illuminates that mystery, Libra simultaneously deepens it. And becoming an American, DeLillo seems to say, depends as much on our sharing of these inexplicable moments of disaster as it does on our enduring ideals of liberty and freedom and justice for all.

The author of thirteen novels, five plays, and numerous short stories, Don DeLillo was born in the Bronx in 1936. He received his bachelor’s degree from Fordham University and worked as a copywriter at the Ogilvie and Mather advertising agency in New York City from 1959 until 1964, during which time he published his first short stories. Americana (1971), his first novel, announced the arrival of a major literary talent, and the novels that followed confirmed his reputation as one of the most distinctive and compelling voices in late-twentieth-century American fiction. The subject matter of DeLillo’s work runs a rich gamut, demonstrating eclectic and sometimes cerebral interests: nuclear game theory, “Hitler studies” as a scholarly enterprise, academic marriages, rock-and-roll stars, hockey and sportswriting, physics, film’s impact on our apprehension of history, JFK, and the inner lives of terrorists. DeLillo’s comic gifts are also considerable, though not always recognized. They come to the fore in White Noise (1985), which won the National Book Award, and Underworld (1997), with its vivid portraits of actor Jackie Gleason and standup comedian Lenny Bruce.

DeLillo’s other literary awards include the PEN/Faulkner Award, for Mao II (1991), and the Jerusalem Prize, awarded to writers “whose work explores the freedom of the individual in society.”

Truman Capote, In Cold Blood (1966)
This account of the infamous Clutter family murder in a small Kansas town and the ensuing trial, conviction, and execution of the perpetrators is still the true-crime story against which all others must be measured.

Theodore Dreiser, An American Tragedy (1925)
A young man with limited means but ceaseless ambition is seduced by the American dream, represented by an intoxicatingly beautiful woman and a chance at instant wealth.

Philip Roth, American Pastoral (1997)
Seymour Lev is a virtuous citizen, happily married and living on his comfortable New Jersey estate when his daughter joins the Weathermen Underground movement, making him ask what he did wrong as a parent.

Neal Stephenson, Snow Crash (1992)
A spirited fictional exploration of how America might be transformed by global capitalism and terror in the twenty-first century, this futuristic work is witty, intelligent, and thought provoking.

Learn More About Libra
print
Back to Top