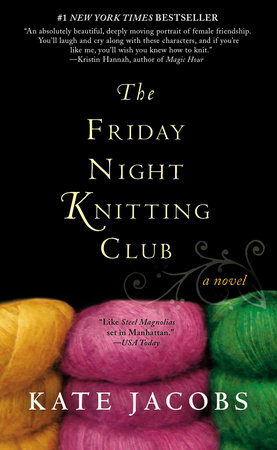 Georgia Walker is a single mom and successful New York City entrepreneur whose yarn shop, Walker and Daughter, has become something of a mecca for knitters of all skill levels and dispositions. What begins as a disorganized Friday night gathering of her most loyal customers turns into a regular meeting of minds and hearts, as each woman discovers there’s much more to be found at Walker and Daughter than tips on knitting technique. Just when business is really looking up, the father of Georgia’s daughter and a long-forgotten nemesis suddenly resurface and Georgia’s orderly world falls to pieces. Soon enough, she learns that she isn’t the only Friday Night Knitting Club member who sees it as the only constant in life, and a saving grace at that.

Kate Jacobs is a writer and editor who divides her time between New York and Los Angeles. A former staffer at Redbook, Working Woman, and Family Life, she is now a freelance editor at the website forLifetime Television. The Friday Night Knitting Club is her first novel.