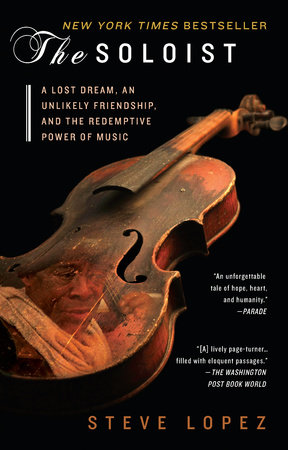 A moving story of the remarkable bond between a journalist in search of a story and a homeless, classically trained musician—destined to be a major motion picture from DreamWorks, starring Jamie Foxx and Robert Downey Jr.

When Steve Lopez saw Nathaniel Ayers playing his heart out on a two-string violin on Los Angeles’ skid row, he found it impossible to walk away. More than thirty years earlier, Ayers had been a promising classical bass student at Juilliard—ambitious, charming, and also one of the few African-Americans—until he gradually lost his ability to function, overcome by schizophrenia. When Lopez finds him, Ayers is homeless, paranoid, and deeply troubled, but glimmers of that brilliance are still there.

Over time, Steve Lopez and Nathaniel Ayers form a bond, and Lopez imagines that he might be able to change Ayers’s life. Lopez collects donated violins, a cello, even a stand-up bass and a piano; he takes Ayers to Walt Disney Concert Hall and helps him move indoors. For each triumph, there is a crashing disappointment, yet neither man gives up. In the process of trying to save Ayers, Lopez finds that his own life is changing, and his sense of what one man can accomplish in the lives of others begins to expand in new ways.

Poignant and ultimately hopeful, The Soloist is a beautifully told story of friendship and the redeeming power of music.

Steve Lopez is a columnist for the Los Angeles Times, where he first wrote a series of enormously popular columns about Nathaniel Ayers. Lopez, the father of three children, lives in Los Angeles with his wife, Alison, and daughter, Caroline.

Learn More About The Soloist
print

Reckless
Back to Top