Mistress of the Art of Death Reader’s Guide 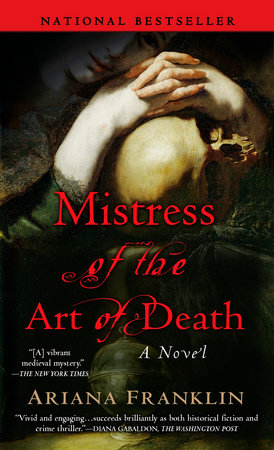 Mistress of the Art of Death Reader’s Guide

print
Mistress of the Art of Death Reader’s Guide

Vesuvia Adelia Rachel Ortese Aguilar, heroine of Ariana Franklin’s historical thriller Mistress of the Art of Death, is a woman out of place in her own time. An orphan raised by an atheist Jew in twelfth-century Salerno, Adelia has mastered the “art of death” (what we would today recognize as forensic medicine) in an age when medical practitioners of any sort are viewed as witches and sorcerers, and a woman’s only place is in the home or in the convent. But when the horrific killing of a Christian boy in England casts murderous suspicion on the local Jewish population—threatening their lives and, more important, the tax revenue they generate—the legendary Plantagenet king Henry II implores the King of Sicily to dispatch his best master of this frightful new science to solve the crime. Thus begins Adelia’s pursuit of Rakshasa, the devilish serial killer who has left a grotesque trail of dead children stretching from the Crusade-torn Middle East to the bustling medieval port town of Cambridge—where the death count has soon reached four and anti-Semitic sentiment is nearing a boiling point.

Mistress of the Art of Death employs the narrative devices of a modern thriller to explore the world of medieval Europe, weaving historical figures and events into the plot to provide a view of the twelfth century that is often at odds with the conventional label of “Dark Ages.” While Adelia’s education, self-sufficiency, and scientific rationalism are anathema to the medieval Catholic Church’s superstitious dogma and misogynistic social hierarchy, she is not alone in her surprisingly modern mind-set. Her home city of Salerno is a bastion of scientific inquiry, where Jew, Catholic, and Muslim live as equals; Henry II, though self-serving and ruthless, promotes religious tolerance and sets the foundation for today’s Western system of justice; and even the holy city of Jerusalem, before the ravages of the Crusades, finds people of every faith living in relative harmony.

Set against this rich background is the story itself, a serial-killer mystery propelled by a sociopath every bit as gruesome and frightening as the fictional (and real) killers of today. Rakshasa’s crimes are shocking enough in and of themselves, but when committed in the context of the era’s pervasive superstition they take on demonic qualities that the people of Cambridge view as all too real. These same superstitions make Adelia’s challenge as an investigator nearly insurmountable: the examining of dead bodies is a desecration, scientific inquiry is the work of the devil, and the implication of religious figures in the crime is blasphemy. Adding to these obstacles is Adelia’s status as a mere woman—and one of dubious honor—who travels with two despised heathens, a Jew and a Muslim. Soon one of these companions, Simon of Naples, is dead, and this loss, added to her unexpected attachment to the people she meets in Cambridge, transforms Adelia’s mission from one of duty into one of desperate need. Ultimately, her unconventional manner and methods bring Adelia to the attention of both Henry II and an unlikely suitor—and land her directly in the pit of the beast himself, the depraved former Crusader now known as Rakshasa.


Learn More About Mistress of the Art of Death
print

An Inquiry Into Love and Death
Simone St. James

Seven for a Secret
Lyndsay Faye

The Other Side of Midnight
Simone St. James

The Name of the Rose
Umberto Eco
Back to Top