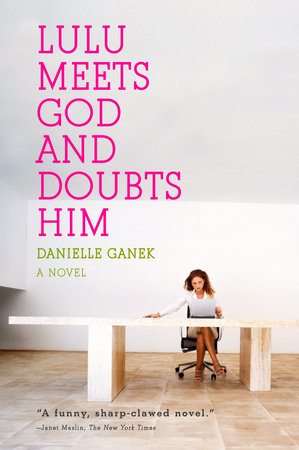 INTRODUCTION
New York City is the white hot center of an art bubble and the prices just keeping going up and up and up—quite literally—at the auction that opens Danielle Ganek’s novel Lulu Meets God and Doubts Him. Narrator Mia McMurray watches breathlessly with the rest of the gawkers as the price of a single painting—Jeffrey Finelli’s Lulu Meets God and Doubts Him—climbs from $700,000 to $4.3 million in a matter of minutes. As the auction closes, Mia casts back to the evening nine months earlier when the debut of a promising emerging (read: unknown) artist turned into an art-world maelstrom that entangled her with New York’s most powerful gallery owner, a sexy superstar of installation art, the painter’s beautiful muse, and two über-wealthy collectors.

Before the Finelli opening, Mia’s life could not have been less eventful. Employed at the Simon Pryce Gallery in New York’s Chelsea district for more than five years, Mia has been “single-handedly trying to overturn the stereotype of the nasty gallery girl.” She also harbors a secret as deep as it is frustrating: She too longs to be a painter. But that night, the artist himself sweeps into the gallery bearing a stinky Italian cheese and the canvas that will turn the art world—and Mia’s life—upside down.

Despite being a figurative painting—and thus passé by current market tastes—Lulu has a huge impact. The celebrated installation artist Dane O’Neill is mesmerized by the portrait of Lulu, a wise young girl holding a dripping canvas, and the gallery audience is agog, but tragedy lurks outside. Ducking out for a smoke, Finelli is run over by a taxi, and his death leaves unanswered questions about the ownership of the painting that everyone suddenly just has to have. Immediately after the accident, the grown-up Lulu appears. Stunning and enigmatic, Lulu Finelli has never met her uncle, but it seems he promised her the painting, which Simon claims has already been sold to him. Two billionaire collectors, Connie Cantor and Martin Better, want to buy Lulu, but Simon foolishly sells the painting to a fickle Hollywood celebrity, who promptly flips it to Pierre LaReine, Simon’s nemesis and the owner of New York’s most influential gallery.

Lulu may not get the painting, but she does wind up catching the art bug, and Mia—who has made fast friends with her over Chinese takeout and backgammon—watches awestruck as the self-proclaimed Wall Street bean-counter metamorphoses into a free-spirited bohemian and an emerging artist in her own right. Under Dane’s loving tutelage, the transformed Lulu might well have instilled jealousy in Mia. But she has her own romantic entanglement—with handsome art adviser Zach Roberts—to keep her occupied, and soon enough Mia discovers that her true creative calling doesn’t involve oils or canvas. The tale she relates is a lively and charming study of human foibles, the creative impulse, and a hilarious and eye-opening look at the contemporary art world.

A CONVERSATION WITH DANIELLE GANEK
Q. In the novel, Simon says that “art is the new cocaine,” and Mia is sent to “give Martin Better some sex” when he is interested in purchasing Lulu. Are these actual art world colloquialisms? How accurate are they?

A. Isn’t cocaine used as a metaphor often enough to be a cliché? Simon, not the most original thinker on the planet, is quoting someone when he says “art is the new cocaine.” And that person was rewording Marcel Duchamp who famously called art a habit-forming drug. So, colloquialisms? No. Although I suppose the language of addiction and lust feels colloquial when applied to collecting. These two quotes are specific to Simon. Especially his comment about sex. That’s very Simon. I’ve never heard a dealer talk like that (although that doesn’t mean they wouldn’t in the privacy of the back room).

Q. How much of Mia is based on you? Did you aspire to paint before you discovered writing?

A. I think there’s a universality to Mia’s creative aspirations that makes her not just like me but like a lot of artistically inclined people. There’s that awful frustration of one’s skills not matching one’s ambitions that we’ve all felt. I was always afflicted with this intense desire to write rather than paint or photograph (although I have done both, badly). At times, it has felt like that, an affliction. There’s a place in the book where Mia expresses her fascination with people with regular money-making jobs who aren’t tortured by their creative ambition. That’s me. And the part where she says guacamole is practically her religion. Me too.

Q. You’re an avid art collector yourself, yet some of the funniest send-ups in the novel are of collectors. Is the world of art collecting as competitive and absurd as you depict?

A.Yes and no. The fun of writing fiction is making stuff up. But I think there are a lot of competitive and absurd—and competitively absurd—people in all realms of life. And it is human nature to want what you can’t have. When a competitive and absurd art collector wants a piece and is told it’s not available, that person may behave in a competitive, and yes, absurd, way. That’s what makes art auctions so fascinating to watch.

Q. How do you feel about figurative painting? Do you have any in your collection?

A. I’m an easy audience. I suppose this is another way I’m like Mia; I’m a big fan. And I like all different kinds of art. I’m just utterly in awe of artistic talent, and the talent to create a really strong portrait of a living person and have that person come to life on a canvas is one that I think is unique.

Q. Who are some of your favorite artists, and is the painting Lulu inspired by the work of someone specific?

A. I love Richard Prince, Damien Hirst, Jeff Koons, Mike Kelley, Cindy Sherman, John Currin, Lucian Freud . . . photographers Diane Arbus and Robert Frank. But when it came to the Lulu painting, I tried to conjure an image that would somehow represent the essence of the power and intensity we feel when observing any great piece but didn’t feel like any actual known work. I didn’t want it to be too specific, like this is Lucian Freud meets John Currin or something like that—I really wanted it to exist only in my mind and then on the page.

Q. Have you been to the Venice Biennale and Art Basel? If so, how accurate are your depictions of them in the book?

A. I’ve been to both the Venice Biennale and Art Basel a few times. (Like Mia, I love the sausage you get at the Basel convention center and the white asparagus that is in season at time of the fair!) I suppose my depictions are fairly accurate, although I’m not the kind of fiction writer who walks around taking journalistic notes and then transcribing them. I’m sure there are people out there who will feel compelled to let me know what I got wrong, that the entrance to the Basel Art Fair doesn’t face a gallery booth wall as described or something like that. I didn’t say much about Venice because when Mia goes there, she is so fixated on meeting up with Zach that she isn’t her normal observant self.

Q. Who are some of your favorite writers, and does this book have any direct literary influences?

A. As with art, I’m a big fan. I’m an easy audience and I read constantly. I read all kinds of things. I’m obsessed with F. Scott Fitzgerald. I love Lorrie Moore, Ann Patchett, Jane Austen, and Edith Wharton. My first favorite book was I Capture the Castle, by Dodie Smith. The charismatic narrator captured me at a really young age, when I first aspired to write. It’s still one of my favorite books, and I think I will always retain that initial desire to create a really likable narrator with a great sense of humor. I love reading—and writing—first-person narrators. I don’t enjoy writing in the third person nearly as much.

Q. You’ve already received some rave reviews from people in the art world, including Richard Prince and Larry Gagosian. Were you nervous about how people in that milieu would receive the novel?

A. Frankly, I was nervous about how people in any milieu would receive the novel! But, yes, I was nervous about friends in the art world; I hoped they would understand my sense of humor. So far, no one in the art world who has read a galley has found fault with anything; they all claim to have loved it. (Although, really, what are they going to say to my face?) And no dealers have complained that Simon or the “small, uncircumsized” Pierre was based on them.

A. A novel in which the narrator is a thirty-seven-year-old New York City decorator who has carried a torch for her first boyfriend for twenty years. She remeets him when they’re both hired (he’s an architect) to work on redesigning an awful McMansion, and although she has renounced the need for love, she believes it’s destiny. Until she discovers she hates him. I think she’s an older, funnier version of Mia with a unique perspective on the conspicuously consuming world in which her creative aspirations have landed her.

Q. Now that you’re a published novelist, how would you compare the world of art to the world of book publishing?

A. Well, unlike people buying art, people who buy books to read don’t have to compete with one another to get what they want, unless it’s within the rarefied world of book collecting and first editions. You don’t see anyone racing through Barnes & Noble when the doors open to make sure they get their fix! So there’s not that competition. (Although it’s fun to imagine that behind the doors at the publishing houses there are the same competitive and absurd behaviors of acquiring editors to observe as there are in the art world!) The team of women—and, in my case, they are all women and I adore them—who have been involved in my book are all very nice and extremely civilized. I can’t see any of them screaming into a phone, and you do see that in the art world—people getting very worked up!

In the art world everyone is competing for very little good product: Dealers compete for artists and artists’ works (an artist could be represented by three different dealers in three different cities and only produce ten works a year) and clients; collectors compete with one another for works; museums have to compete with everyone, and they have smaller budgets. So there’s more intensity, I guess: definitely more screaming into phones.

Learn More About Lulu Meets God and Doubts Him
print

Waltzing at the Piggly Wiggly

The Pursuit of Alice Thrift
Back to Top