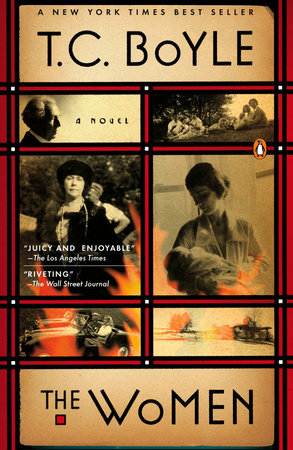 INTRODUCTION
In a scene from T.C. Boyle’s The Women, Frank Lloyd Wright declares himself the greatest architect in the world. Wright was in court at the time and defended his claim to the judge by stating, “Well, Your Honor . . . I am under oath” (p. 380). While some might fault him for his arrogance, no one can deny that he remains one of modern architecture’s preeminent figures. In his day, however, he received as much publicity for his extramarital affairs as for his buildings. His romantic life was as flamboyantly unconventional as his creations, and the two were often deeply intertwined. Boyle, no stranger to eccentric historical figures, explores Wright’s private and public lives at their literal intersection: Taliesin, his thrice-destroyed Wisconsin estate-cum-love-nest, which he built (and rebuilt) for the women he loved.

While The Women’s obvious narrator would be Wright himself—or perhaps his various lovers—the work is instead narrated by one of Wright’s apprentices, Tadashi Sato. Annotated with Sato’s personal asides and clarifications, the novel explains that Tadashi’s original text was written in Japanese and translated into English by his Irish American grandson-in-law. Thus secure—we think—in the hands of its narrator, The Women launches into Wright’s affair with Olgivanna Milanoff, the last of his three wives.

Wright first meets Olga at an opera performance in Chicago. He is nearly sixty and she is much younger—though old enough to have married, borne a daughter, and become an acolyte of the mystic philosopher Gurdjieff. Entranced by her beauty and exotic carriage, Wright literally plucks her out of the audience and woos her into his bed and away to Taliesin. Unfortunately, he is still married to his previous wife, Maude Miriam Noel, who is enraged when she hears of the affair and leverages the not-inconsequential power of the press to sway public opinion—and the law—against Wright and his new lover.

Wright’s chronic indiscretion is his undoing. Miriam had left him to nurse her morphine addiction in California and might have remained ignorant of his new affair if he hadn’t impregnated Olga while claiming she was Taliesin’s housekeeper (this was, incidentally, the same uninspired cover he’d used years earlier for Miriam when she was his mistress and he was still married to his first wife). His equal in passion if not in brilliance, Miriam was once a celebrated Southern belle and later a sculptress in Paris who insinuated herself into his life at a time when Wright was grieving for an earlier mistress—the brutally murdered Mamah Borthwick.

It was for Mamah that Wright had left Kitty Tobin, his wife of twenty years and the mother of his six children. Savaged by the press—as Miriam and Olga would be in their turn—Mamah was an early feminist who abandoned her own husband and two children to be with Wright. It was also for Mamah that he broke ground for the first incarnation of Taliesin. There, sheltered from society and their spouses’ recriminations, the two found happiness until an axe-wielding madman cut it all short.

Boyle has won wide acclaim for powerfully told tales peopled by characters outside the mainstream. In Wright, he has found an ideal subject—a man as compelling personally as professionally, whose hubris was as prodigious as his achievements and passions—and the result is a sly, revelatory portrait of a quintessentially American genius.

T.C. Boyle has written eleven novels, including The Road to Wellville, about John Harvey Kellogg, the eccentric nutritionist and inventor of cornflakes, and The Inner Circle, about sex researcher Alfred C. Kinsey. Among his other novels are World’s End, winner of the PEN/Faulkner Award; Drop City, a National Book Award finalist; and The Tortilla Curtain, winner of France’s Prix Médicis Étranger. He has also published eight collections of short fiction, and his stories have appeared in The New Yorker, Harper’s, Esquire, The Atlantic, McSweeney’s, The Paris Review, and the Best American Short Stories and O. Henry Awards annual volumes. He lives in Santa Barbara, California, in the George C. Stewart house, the first of Frank Lloyd Wright’s California designs, which will celebrate its centennial in 2009.

A CONVERSATION WITH T.C. BOYLE
Q. How long have you lived in the George C. Stewart house? What is it like to inhabit a Wright design?

My wife and I and our three children have lived here for sixteen years. During that time we have done out best to restore it, a task that included sanding and refinishing the woodwork with Wright’s own mixture of linseed oil and turpentine, doing an earthquake retrofit and jacking up the east end of the house, which had been listing toward the rising sun, in order to pour foundations. The experience of living here is otherwise rich and varied, the landscape lush, the lines of the house, with its layered battens, as dramatic as those of an Aztec temple. In short, it’s pretty cool.

Q. Did you always plan to write a novel about Wright? What draws you to a particular subject?

Ever since we moved in, I’d wanted to learn as much as I could about the architect, by way of understanding and appreciating how his genius had touched us personally. Throughout my time here I had contemplated writing about aspects of his furiously complicated life and work, but other books and subjects intervened. Finally, in 2006, I began research and completed writing in July, a year later.

Q. In addition to Wright, you’ve also written novels about John Harvey Kellogg and Alfred C. Kinsey. If you had to choose between being Kellogg, Kinsey, or Wright, whom would you pick and why?

Each of these three hugely influential figures of the twentieth century was an egomaniac and a narcissist who could not relate to people except as they fit into his scheme. Novelists are a lot like that. Which is why, I suppose, I am attracted to such figures. On the other hand, each led a life that would have put me in the mental hospital within a year. So, I’ll equivocate: none of the above.

Q. What’s more fun to write, historical or contemporary fiction? What kind of obligation do you feel to a historical subject (e.g. Wright)?

I get a charge (obviously) out of both the contemporary and historical settings. In fact, creating art—living in a dream most of the days of my life—is a kind of miracle I will never tire of. As for my obligation to historical subjects, I feel no constraints whatever and follow the path the story lays out for me. That said, I do like to present these odd characters and odd bits of history as they actually happened for the great good fun of it. To my mind, history wasn’t necessarily made by generals and politicians, but by visionaries who changed the way we live and think. Wright, Kellogg and Kinsey certainly qualify in spades.

Q. Can you discuss your choice of narrator? Was there a real Tadashi Sato?

Tadashi Sato is an invented character, but of course the apprenticeship was international, and Wright was very much influenced by Japanese culture and architecture. If Tadashi didn’t actually exist, then he should have. Certainly there were any number of acolytes flocking to Taliesin to bask in the aura of the great man, and I like to think that Tadashi is representative of them.

Q. In the course of your research, what was the most revealing thing you discovered about Wright? What nonfiction resources would you recommend to someone interested in learning more about him?

The thing that most interested me about Wright was how different his method of creation was from my own. I need peace, serenity, beauty, a good dog, and a good night’s sleep in order to create. Wright needed scandal, lawsuits, animus, tumult, mayhem, and catastrophe just to feel alive and engaged. God bless him. It takes all kinds. As for nonfiction works on Wright, they are innumerable—perhaps more books have been published on him and his work than practically any other figure of the past century, some one thousand or more. I list a number of the more engaging titles in my acknowledgments.

Q. Miriam’s presence dominates the book, inhabiting a good many of the chapters about Olga and closing Mamah’s section. Did she similarly dominate Wright’s life? Are the excerpts of Miriam’s letters real or did you create them?

Miriam came to dominate my life as well. She was a furious, heartbreaking, delusional and grandiose woman, and yet she was afflicted by the same needs and hungers that afflict us all: the need for security, love, affirmation. Make of her a figure of fun but also, on a deeper level, of tragedy. As for her letters, some are invented (after her style) and some paraphrased from the actual letters which were printed in the newspapers. Her scandals—and those of Olgivanna, Kitty and Mamah—made for the juiciest tabloid reading of the day.

Q. Why did you choose not to include more about Kitty and Wright’s first family?

This phase of Wright’s life, when he used his prodigious energies and genius to formulate his Prairie style and build the majority of his houses in the Midwest, could take up a book all on its own. But the story is more conventional than what was to follow and, perhaps, not quite as compelling or racy or tragic.

Q. In a footnote, you make a little dig at your own profession, writing, in describing one of Wright’s casual lovers: “like all novelists, she had unrealistic expectations” (p. 27). Do you think that authors tend to be more demanding in a romantic relationship than other people?

Authors tend to be more demanding in all modes of life than other people. They are, like Miriam, delusional. And they are, for the most part, not a pretty lot at all. Are there exceptions? Are there novelists as pure and shot-through with benignity as the saints themselves? Well, maybe one.

Q. In your view, are there similarities between writing fiction and architecture?

But of course. The architect constructs his drawings from the same sort of vision a novelist sees as he/she begins to construct a story with the bricks and mortar of words. The difference is in the improvisation. The architect, finally, works from plans, but we build our word-houses day by day, adding by accretion (and sometimes reducing by subtraction) until the ultimate shape reveals itself.

Ah, what pure joy! Work is the essence of my life and the reason I am able to face the world each day (without coffee: I was born naturally caffeinated). For next year, I’ve already delivered a book of fourteen stories called Wild Child. For the following year, if the fates allow, I hope to present my next novel, now about halfway finished. It’s called When the Killing’s Done, and it has a contemporary setting and returns to the theme that seems to dominate my work in recent years: our place in nature.

Learn More About The Women
print

Till We Meet Again
Judith Krantz

Some Things I Never Thought I’d Do
Pearl Cleage

After the Fire
Belva Plain

The Horse Whisperer
Nicholas Evans
Back to Top