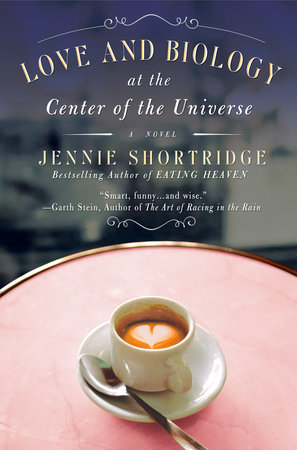 Upon learning that her college sweetheart husband has been seeing another woman, Mira Serafino’s once perfect world is shattered and she wants no one, least of all her big Italian family, to know. She takes off—with no destination and little money—heading north until her car breaks down in Seattle. There she takes a job at the offbeat Coffee Shop at the Center of the Universe, where she’ll experience a terrifying but invigorating freedom, and meet someone she’ll come to love: the new Mira.

Jennie Shortridge lives in Seattle, Washington, with her husband, and juggles her time between writing novels and working in the community to foster literacy.

A CONVERSATION WITH JENNIE SHORTRIDGE

Q. With your first two novels, Riding with the Queen and Eating Heaven, you created fictional stories using your own life experiences. Have you mined your own life again for Love and Biology at the Center of the Universe?

A. Geographically, yes. I’m in love with the coast of Oregon, and wrote some of this book while at a writer’s retreat there. And now I live in Seattle on a hill that overlooks Fremont, and I hear that little bridge rising every so often, and see the seaplanes buzzing down the canal from my home office window. But personally speaking, not quite as much. I’ve never had children, or been a biology teacher, or lived in a small town, or gone through a separation from my husband, but I do know the pain of feeling abandoned, which I think is at the heart of this story. I’m also in the midst of my own perimenopausal craziness and brain fog, and the bewilderment over what it all means about who I am and who I am becoming. Am I still a sexual being, a biological woman? Obviously I’d like to think I always will be, but we get such weird messages from society about it. And I think I’ve always struggled with the whole “good girl/bad girl” construct, wanting only to be seen as “good.” I am a people-¬ pleaser, a middle child, a Libra, and, of course, female, so I have it in spades. But I’m getting better.

Q. Right. Mira begins the story as the “perfect” wife and mother, but we quickly see that façade crumble as the story progresses. Is she inherently a good person with naughty tendencies, or a bad girl who just wants to be good? Is there a difference?

A. Well, that’s the thing. She’s both. I think that probably most of us have some duality in our personalities, our natures, and we can have a hard time reconciling the two, as Mira does at first. The more important thing is to be true to yourself, and that’s Mira’s challenge in the story: to discover what that means for her.

Q. Your characters’ names are often evocative of their inner states or personalities. Tell us about some of the names you chose for the characters in this book.

A. The main character, Mira Serafino, is named for her saintly mother. Mira means “light of the world,” and Serafino means “angel.” She’s almost obligated by her name to try to attain sainthood, which is, of course, impossible. Mira’s husband’s name is Parker, and there is a point in the story at which she sees him as parked, unmoving. Their daughter, Thea, is a bit theatrical, but also kind of wise, and this old Greek name seemed appropriate. Nonna is simply the Italian word for grandmother; Alfonso a name I just like. It feels big and friendly to me. I wanted Gus and Doug to be fairly simple, fun-¬ loving guys, so I gave them guttural one-¬ syllable names. Kind of like, “Dude!” What I really had fun with were the band names . . . and here’s a little secret: The Twang Gods first appeared in Riding with the Queen. I brought them back because I loved their name so much. I wanted them to have their proper due.

Q. You tackle big life issues in your novels—including mental illness, homelessness, addiction, and death and dying in your previous books. In Love and Biology . . . , we have a woman facing menopause, empty-nest syndrome, and the breakup of her marriage. Do you specifically set out to chronicle certain issues, and why?

A. I think I did at first, and probably pretty obviously to deal with some things I’d been through in my own life: having a mentally ill mother, never making it as a musician, being with someone I cared about who was dying. In this book, the issues I care deeply about have to do with how we view women at midlife, and how we feel about ourselves. I think one of the most invisible populations on this planet is midlife women! People no longer seem to see you, or place value in you. I don’t know if it has a biological underpinning—we’re no longer viable baby- makers so we have less biological importance—but I think we actually have so much more social relevance. We’re wise, we’re caring. We’re strong—we’ve been through so much and survived it. And we’re funny, and sexy, damn it!

Q. Yes, it’s refreshing to have midlife women portrayed as sexual beings, and your protagonists certainly show that aspect. Does that just flow as a natural part of your character development, or do you make a conscious effort to include sexuality? And do you ever surprise yourself at what you’ve written?

A. Well, I always aim to write fully human characters, and sexuality is part of that. Even if you’re asexual or nonsexual, that would be relevant to who you are. In this story, Mira’s sexuality is at the core of her journey. She’s been denying it for so long, trying to tamp it down, but that doesn’t actually make it go away. By becoming a more sexual being, she becomes more herself. And yes, I do surprise myself with the sex scenes. I don’t know where they come from. Matt, my husband, likes to tell people they don’t come from real life—he thinks that’s funny. All I can say is I write fiction. I like making up stuff.

Q. In the story, Mira and her grown daughter, Thea, have had a difficult relationship, especially as Thea tries to gain independence from her mother. You don’t have children, yet you seem to know this dynamic intimately. Did you and your mother have a hard time separating as you became an adult?

A. Oh, yes. I don’t think my mom knew who she was if she was no longer a mother. She had a hard time when I moved out, and I was the third out of four to leave. Mira tries to exert control and Thea pulls away more. I remember that feeling very well. It was difficult, and I was angry with my mom for a while. My sisters have children who are coming of age now, and I feel close to all of them, so I still feel the pull, in both directions. I can look at it from both sides now, to misquote Joni Mitchell.

Q. Your readers often write to you, thanking you for sharing stories so personal that they feel they could be written about themselves. What do you hope your readers will take away from this book?

A. My readers are wonderful. They do write and share their stories, and it really touches me. And the book groups are great fun to talk with on the phone; we always have great conversations. With this book I just hope to break apart some of the myths and rules around being a middle-¬ aged woman, to say it’s okay if you still don’t know what the heck it all means, or what you want out of life, or how to be a good wife and mother and daughter and sister and friend. As long as we’re trying our best, and growing, and as long as we’re being true to ourselves, I think we’re on the right track.

Q. What’s next? Do you have a new book in the works?

A. I’m really excited about the next book, which is inspired by a true story that happened a few years ago in Portland. A father and daughter were found living deep in a forest that abuts the city, and when the police investigated, they determined that the girl was safe and healthy, and in fact, well advanced from her homeschool education. Good-hearted people found them a place to live, a job for the dad, but the two disappeared again when they felt they were being hounded by the media. The last thing I would ever want is to make them feel exploited all over again, so I am creating a fictional story of my own imagination that examines what makes a family a family, a home a home. Does it matter if you have a big house, money, if you can give your kids all the “stuff ” other kids have, or does love and dedication trump all that? These are the kinds of questions that drew me to this story, and that excite me.

Return of the Stardust Cowgirl

Two of a Kind

The Night of the Comet

Notes From The Underbelly

Shake Down the Stars

The Repeat Year
Back to Top