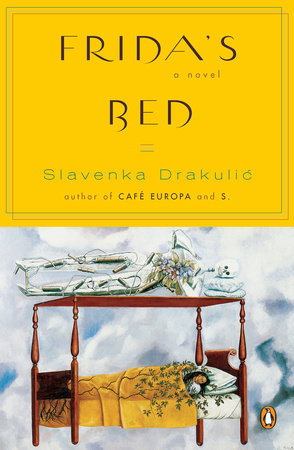 Frida’s Bed is the kind of posthumous literary ventriloquism that is rarely attempted, and even more rarely sustained, with such imagination over the course of an entire novel. Slavenka Drakulic inhabits the consciousness of Frida Kahlo with such authority that one may easily forget that it is not Kahlo herself who wrote the book. Exploring the inner life of one of the most remarkable artists of the twentieth century and surely one of the most tormented, the narrative takes the form of an extended death-bed recollection, as Frida Kahlo recalls the course of her turbulent life. Stricken with polio at age eight, then the victim of a horrific accident as a young woman, pain took up residence in Kahlo’s body and never left her. Kahlo suffered through thirty-seven major operations, including two life-threatening miscarriages and the amputation of a gangrenous leg, endured long periods of confinement to her bed, and was forced to wear suffocating corsets to keep her body erect. Drakulic looks at both the devastating power these physical sufferings had over Kahlo and her heroic efforts to make art despite (and possibly because of) them. Indeed, the relationship between pain and creativity is crucial to Frida’s Bed. Drakulic masterfully describes the inner dynamic through which Kahlo was able to face her pain directly and transform it into works both arresting and strangely beautiful. In response to his admiring assertion that her work is surrealist, Kahlo tells André Breton that rather her work is autobiographical, that she only paints her particular agonies. “I dragged my pain from its depths and brought it to the surface, exposing it to the light and to public scrutiny. . . . I displayed not only the face of that pain but also the body, its legs, its wounds, its heart, its stomach, its spine. . . And that gave me strength” (p. 102–103). No one had ever created such paintings before, as Georgia O’Keefe rightly observed. Women were not supposed to reveal their suffering in the ways Kahlo revealed hers. Doing so was as emotionally revolutionary as her husband Diego Rivera’s vast murals were politically revolutionary.

Of course Kahlo’s pain is not only physical. Her marriage to Diego added the sting of sexual betrayal to her sufferings. Despite his recognition of Frida’s great originality and his strong support of her work from their first meeting, as well as his insistence that she was the better artist, Frida lived in the shadow of Diego’s fame, and his constant womanizing humiliated and tormented her. Kahlo’s own polyamorous energies—her affairs with both women and men (Leon Trotsky, most notably)—are presented as a mixture of revenge against her wayward husband and a momentary release that sexual oblivion could offer her.

Much attention has been devoted to Frida Kahlo in the last twenty years—her life has been explored in films and in biographies, her work has been critically examined and praised and sold for record-setting sums at auctions. But surely no one has grasped the inner workings of Frida Kahlo’s mind and heart, the essence of her creative spirit, as powerfully as Slavenka Drakulic does in Frida’s Bed.

Slavenka Drakulic was born in Croatia in 1949. Her nonfiction books include How We Survived Communism and Even Laughed, a feminist critique of Communism that brought her to the attention of the public in the West; The Balkan Express: Fragments from the Other Side of the War, a personal eyewitness account of the war in her homeland; Café Europa: Life After Communism (Penguin); and They Would Never Hurt a Fly (Penguin). Drakulic is also the author of the novels Holograms of Fear, which was a bestseller in Yugoslavia and was short-listed for The Best Foreign Book Award by The Independent (UK);Marble Skin; The Taste of a Man (Penguin); and S. (Penguin). A freelance journalist who contributes to The New York Times,The Nation, The New Republic, Frankfurter Allgemeine Zeitung (Germany), Dagens Nyheter (Sweden), and La Stampa(Italy), as well as other magazines and newspapers, she now divides her time among Sweden, Austria, and Croatia.

A CONVERSATION WITH SLAVENKA DRAKULIC

What prompted you to write Frida’s Bed?

Her paintings, of course! They prompted me to realize how difficult it is to express pain, especially with words. I became aware of it while trying to write about pain, especially in S., my novel about a woman who was a victim of rape. It is difficult for a writer to realize limits of her language. However, in every language there are words that say just that. For example: unspeakable, indescribable, unimaginable. The fact that pain reduces your language to cry or shriek or howl is an immense challenge for a writer. I would like to draw your attention to an important quote at the beginning of the book: “Physical pain does not simply resist language but actively destroys it, bringing about an immediate reversion to a state anterior to language, to sounds and cries a human being makes before language is learned,” writes Elaine Scarry in her book, The Body in Pain. It is different for a painter. While words are abstract, painting (like music) is a direct medium and requires no mediation or translation. I saw it as my task to try to express in words what Frida Kahlo expressed in her paintings.

I don’t see much difference. Of course, a writer needs to take into account the facts about a real person’s life. There are many books about Frida Kahlo, but they are mainly descriptive. I did not feel that there is a danger of repetition simply because, while writing about her, not many others attempted to enter Frida’s mind. Maybe it’s because this is difficult and could end up being unconvincing. However, since I have had quite a bit of experience with living with pain, this perhaps made it easier for me. Paradoxically, I am a kind of writer who does not believe in experience. Many people have interesting experiences but they don’t know how write about them. Writing is not about experience, but about talent and imagination. So in a way, this book is an exception for me. I am also very much in debt to various biographers of Frida Kahlo, most of all Hayden Herrera.

How faithful were you to the facts of Frida Kahlo’s life?

I do hope that readers will not read this novel as yet another biography. That would be a mistake. All I can say is that although I am faithful to the general, well-known facts about her, these are just a frame of the portrait, of what I call “my Frida.” Of course, there is Frida Kahlo, a historical person, and then there is my literary character, my interpretation, if you prefer, of that historical person. They are not identical—how could they be? But perhaps my Frida helps a reader to understand the real Frida and why she painted what she painted. See, it is hard to describe emotions in a biography; we can do that only with the help of literature. And for Frida Kahlo, emotions were essential, a driving force behind her painting.

Was it difficult to keep your own understanding of Kahlo from overpowering your sense of how she understood herself?

There was no need to distinguish between the two, because I wanted my writing to be as close as possible to her painting, to be based on it. In her paintings she showed how she understood herself. I looked at her paintings and in this way attempted to enter her as a person. Therefore the novel has three types of narration: the factual one in third person, the imaginative one in first person, and an interpretative one, describing a number of her paintings.

Could you talk about what you find most original and powerful in Frida Kahlo’s paintings?

So much has been written about Frida’s paintings, by many competent critics. I cannot compete with them. What fascinates me about her work is the raw feelings she expressed. For that you not only need to be very talented, but you must also be a very brave artist. Being such an artist, she succeeded in achieving the magic trick of turning her personal experience of pain into a universal one.

The official cause of Frida Kahlo’s death was given as pulmonary embolism, though it was widely suspected that she died of an overdose. What made you present her death as an unambiguous suicide?

Reading a lot about her life and looking at her work, I concluded that a suicide is the only logical exit for such a person. All her life, she played a chess game with death. And she was winning, over and over, being perfectly aware that in the end she is bound to lose. All of us do, but we are not forced to fight death almost every day, as she was. In my novel I gave Frida the strength to decide that she will be the one to pick up the moment of her own death. She did not just succumb to death, she decided to die. I thought I owed that to “my Frida.” I wanted her to be conscious till the end, not drugged and not aware of herself, as she is often described. Or let me put it this way: if she would have been clear in her mind, I believe that suicide would have been her choice. Anyway, this decision, in my view, would have been more in accordance with her character.

Do you think your book will inspire people to look at Kahlo’s life and art with new eyes? Is there some aspect of Frida Kahlo as an artist and woman that you feel has been misunderstood or underappreciated?

I still remember watching the film Frida that starred Selma Hayek. It is a good film, but it left me with a feeling that there is one thing it doesn’t achieve, and that is showing the importance of pain in her life. It is essential in order to understand her, the very reason why she painted. (Mind you, I am not saying here that it is important to suffer in order to be an artist, I am not adolorist!) It is also important to understand how unbelievably brave that woman was to do that, how difficult physically it was for her to paint. I understand why it is difficult to show it in a film. Therefore, I tried to do it in my novel.

Tomorrow in the Battle Think on Me

The Breaking of Eggs

The Wild Ass’s Skin
Back to Top