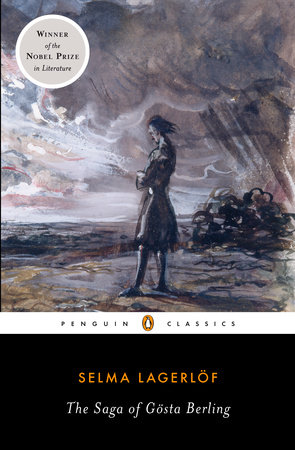 Readers Guide to The Saga of Gösta Berling by Selma Lagerlöf

1. Chapter 1 (“The Landscape”) describes “the setting where Gösta Berling and the cavaliers of Ekeby lived out their eccentric existence” (p. 23). Should the landscape be considered a character in the book? Find other passages where elements of nature are personified. What is the relationship between the protagonists and their environment?

2. Gösta Berling has passionate feelings for a series of women (Anna Stjärnhök, Marianne Sinclaire, Elisabet Dohna, and in the past, Ebba Dohna). Discuss how these young women are described. Do they have any features in common? Do these relationships differ in any way?

3. The characters Gösta Berling and Henrik Dohna are both male and roughly the same age. Compare the author’s descriptions of these young men. In what ways do they embody their social class/other position of the time? Discuss their confrontation in Chapter 10 (“The Young Countess”).

4. Compare and contrast the power dynamic between the majoress, described as “plucky as a man” in Chapter 2 (p. 28), with the cavaliers. In what ways is power expressed in this narrative?

5. Death is a recurring theme in the book, and even appears as a character in Chapter 28 (“Death the Liberator”). Discuss the narrator’s attitude to death in that chapter and in passages from “The Ball at Ekeby” (pp. 79–80, “Oh Death, pale friend”) and “The Cemetery” (pp. 293–94, “Friends, children of mankind, when I die”).

6. Discuss the parent-child relationships in the book: the majoress (Margareta Celsing) and her mother; Melchior Sinclaire and Marianne; the captain’s wife and Ferdinand. What distinguishes these relationships? What do they have in common?

7. When Marianne Sinclaire knows she has lost Gösta Berling forever, she writes a long poem (“a kind of verse”) (p. 133). Is Marianne’s writing better for not being “tied up in the chains of rhyme and meter”? What does this suggest about the power of writing?

8. Chapter 29 (“Drought”) begins with a remarkable address to nature (“If dead things love,” p. 313). Discuss the narrator’s view of nature and the connection between human life and the natural world.

9. Who is telling this story? How do we know? Is the narrator (or narrators) a naive provincial storyteller or a conscious literary artist?

10. Is The Saga of Gösta Berling a novel? A collection of short stories? Does this matter for how we read the book? Choose one of the “stand-alone” stories to discuss in more depth.

11. “Kevenhüller” is a fantastic tale about a remarkable cavalier who is only mentioned in passing early in the book (p. 29). What is the source of Kevenhüller’s genius? Discuss the events in this tale from the point of view of Kevenhüller himself and the narrator.

12. The Saga of Gösta Berling was written in a different era (the 1890s) and is set in an even earlier period (the 1820s). Which aspects of the narrative feel the most remote from our vantage point in the twenty-first century? Which, if any, feel most contemporary?

13. What works of literature do you think The Saga of Gösta Berling might be in conversation with, i.e., what works were in the reader’s realm at the time?

14. How is religion portrayed in the book? Is there a tension between religion, the emergence of science/philosophy, and love? Or are they harmonious?

About Selma Lagerlöf
Selma Lagerlöf (1858–1940) was the first woman, and the first Swedish author, to receive the Nobel Prize in Literature, in 1909. In 1914 she also became the first woman to be elected to the Swedish Academy. Among her many books are The Adventures of Nils Holgersson [HK2] and Jerusalem.
Lagerlöf was quite interested in the new (at that time) medium of film, and a number of her books have been made into films, both in the silent era and later. The Saga of Gösta Berling (1924), a silent film directed by Mauritz Stiller, was the first major film role for Greta Garbo (as Elisabet Dohna).
For the critical reception of The Saga of Gösta Berling and more about Lagerlöf’s life and works, see the Introduction by Prof. George C. Schoolfield.
Learn More About The Saga of Gosta Berling
print

Fat Man in History
Back to Top