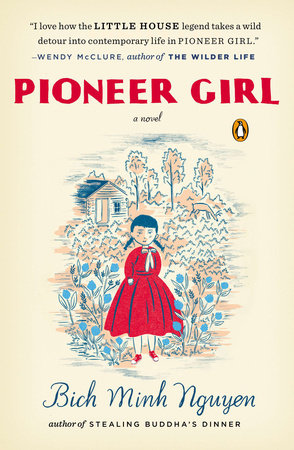 “In books, characters were always keeping secrets. This would be one of mine” (Pioneer Girl, p. 5).

On her ninth birthday, Lee Lien’s grandfather, Ong Hai, gives her a boxed set of Laura Ingalls Wilder’s Little House on the Prairie books, and she promptly falls in love with the series. Lee, a second-generation Vietnamese American, feels out of place growing up in the Midwest and finds solace reading about the pioneer girl who once made her own home there. Lee eventually studies American literature in college, but it’s her prodigal brother, Sam, who spurs her to unravel a literary mystery that might just link the iconic Ingalls family with Lee’s own.

Lee is only six and Sam seven when their father dies. To support the family, Ong Hai and their mother, Tran, eke out a meager living by working at a series of virtually identical Chinese buffet restaurants. The family never settles in one place for long, instead “tracing a wide arc from Wisconsin to Illinois to Indiana, often near colleges, where the public schools were decent and the buffet business a sure thing” (p. 30).

Although Lee and Sam are born in America, their family life retains many old-school Vietnamese ways, from their eating habits to the “Confucian-influenced truth: the boy was entitled to more” (p. 21). Throughout their childhood, Sam blatantly defies their mother’s wishes, but Tran continues to indulge him—even when he ditches school and starts smoking marijuana. Tran, however, only rewards Lee’s good grades and dutiful housecleaning with an endless stream of criticism.

Lee believes that college would mark the end of life under Tran’s harsh rule, but when her dissertation stalls out, she returns home abashed. Tran belittles Lee’s literature studies as “meaningless compared to dentistry, engineering, or at the very least, accounting” and puts her “to work right away at the coffee-slash-noodle-shop” (p. 7) that she recently opened with Ong Hai.

Soon after, Sam returns home and ransacks Tran’s jewelry box, leaving a seemingly worthless family heirloom on Lee’s desk. The pin once belonged to an American reporter named Rose, who patronized the café Ong Hai ran in Saigon in 1965. Years later, Lee reads Ingalls’s description of a gift she receives from her fiancée, Almanzo Wilder. It is “a small gold pin, engraved with a picture of a house” (p. 3). It sounds identical to the one left by Rose. The Wilders’ only surviving child was named Rose, and Lee likes to imagine that the woman was actually Rose Wilder.

Lee never tested her theory, but after Sam leaves her the pin, she decides the time has come to determine the truth. In Pioneer Girl, Bich Minh Nguyen—the acclaimed author of Stealing Buddha’s Dinner and Short Girls—offers an insightful and thought-provoking meditation on literature, family, and identity that will transfix anyone who has ever pondered what it really means to belong, as well as the generations of readers who long to know more about the woman behind The Little House on the Prairie.

1. What prevents Lee from completing her dissertation? Why does she return home instead of getting a non-academic job and an apartment somewhere else?

2. Is Hieu the reason Tran and Ong Hai keep the family in the Midwest? Would Sam have engaged in delinquent behavior if he grew up in California, where he wasn’t such an obvious minority?

3. Does Tran’s favoritism ultimately help or hurt her children?

4. Is Lee denying her heritage by studying Edith Wharton instead of Asian American literature? What are the pros and cons of studying an author’s work from an outsider’s perspective?

5. Discuss some of the ways in which Lee uses food as a cultural metaphor. How can a desire for authenticity sometimes be an expression of racist stereotyping?

6. What is the nature of Lee’s relationship with Alex? How does it change over the course of the novel?

7. Are Lee’s thefts justified by the mystery she is attempting to solve? Since she can never definitively prove either that the pin belonged to Rose or that Rose put a child up for adoption, why is she so driven to learn the truth?

8. Is Greg better off for learning that he may be related to Rose Wilder? If you were in his position, would you want to know?

9. Do you share Lee’s love for the Little House stories? If so, what drew you to the books?

10. In what ways does Pioneer Girl affect your understanding of the Little House series?

11. What are some ways in which Lee’s experiences parallel Laura Ingalls Wilder’s? Does Lee ultimately have more in common with Laura or Rose?

12. If you’ve read Bich Minh Nguyen’s other books, what are some of the dominant themes in her work?

Bich Minh Nguyen (pronounced: Bit Min Nwin, but she goes by Beth) teaches literature and creative writing in San Francisco and lives in the Bay Area with her husband and their two children. Visit www.bichminhnguyen.com.
Learn More About Pioneer Girl
print
Back to Top