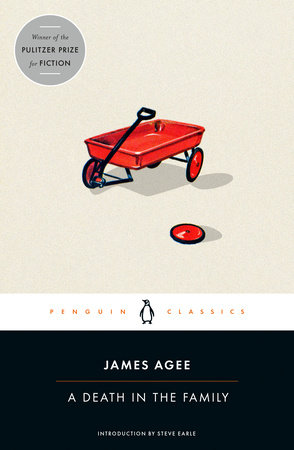 print
A Death in the Family Reader’s Guide

On a spring night in 1915 in Knoxville, Tennessee, Jay Follet, a gentle, well-intentioned but financially unsteady father of two, is awakened by a telephone call from his drunken brother Ralph. Their own father, he learns, is having serious heart trouble and may or may not pull through. Follet bids a lingering good-bye to his deeply pious wife, Mary, and drives off into the darkness, little imagining that the death that is soon to occur will be his own.

In his Pulitzer Prize–winning novel A Death in the Family, James Agee reconstructs through the lens of fiction the real-life car accident that claimed his father when James was not yet six years old. Leading us from the evening of the phone call that sets the tragedy in motion to the funeral that strives to bring the calamity to closure, Agee offers a plot that is simplicity itself, and the occurrences he describes are perhaps no different from those that would transpire within any family that has had a member suddenly stolen from its midst. Despite its seeming straightforwardness, however, A Death in the Family is a novel of surprising profundity and aching lyricism. With deft strokes of characterization, Agee brings vivid life to Mary, whose loss brings her both to rely upon and to question God as she has never done before. We also come to know Mary’s brother Andrew, whose contempt for religion both adds a sharp philosophical edge to the novel and stirs elemental conflicts among its characters. Deep pathos surrounds both Ralph Follet, the self-pitying alcoholic who struggles to come to terms with the dishonored place he fills in his family, and Mary’s aunt Hannah, whose capacities for indulgent kindness and stinging severity hover in a fitful, unsteady balance. In these characters, the lines between love and hate are finely drawn, and Agee develops their sometimes speechless passions with refinement and understanding.

At the emotional center of Agee’s novel, however, stands his own remembered self, in the form of young Rufus Follet. Awkwardly self-conscious, comically trusting, Rufus has only recently begun to understand the depth of the attachment that can exist between father and son—only to have that connection violently destroyed overnight. His efforts to comprehend his loss exude an unforgettable poignancy, and his recollected moments of closeness to his father rise to a poetic grace seldom encountered in the American novel.

A triumph of literary style and psychological acumen, A Death in the Family excels in its brilliant attention to the too-often overlooked nuances of thought, speech, and action that comprise the true fabric of being. One of the most intensely personal novels ever written, it also transcends its author’s subjectivity to shed clear light on the mysteries of life and death, of faith and unbelief, in which all of us inescapably share.

James Rufus Agee, known to his family as Rufus, was born in Knoxville, Tennessee, in 1909. His father, Hugh James Agee, or Jay, worked at a variety of jobs, including construction work for his wife’s family business. When James was nearing six, his father struck an embankment while driving home from visiting his own ailing father. The car flipped over, and Jay was killed instantly. The accident and its aftermath were etched into Agee’s memory. As his teenage years approached, Agee formed a close attachment to an Episcopal priest, Father James Flye, who became his mentor and surrogate father. Agee graduated from Phillips Exeter Academy in 1928 and moved on to Harvard, where he studied literature under the eminent critic I. A. Richards. After graduating, Agee began a productive but difficult tenure with Fortune magazine. In 1936, on assignment with Fortune, Agee traveled to Alabama with photographer Walker Evans to report on the struggles of poor tenant farmers. Although Fortune rejected Agee’s piece on the subject, his collaboration with Evans led to a groundbreaking, though initially unpopular work, Let Us Now Praise Famous Men, published in 1941. While working on a variety of fiction manuscripts, Agee wrote film criticism for the Nation and a number of screenplays, including The African Queen and The Night of the Hunter. Battling alcoholism and heart disease, Agee worked for years to complete his magnum opus, a novel about his father’s death called A Death in the Family. On May 16, 1955, two days before the thirty-ninth anniversary of his father’s fatal accident, James Agee died of a massive heart attack in a New York taxicab. Published posthumously in 1957, A Death in the Family was awarded the Pulitzer Prize for Fiction in 1958.


Learn More About A Death in the Family
print

Appointment in Samarra
Back to Top