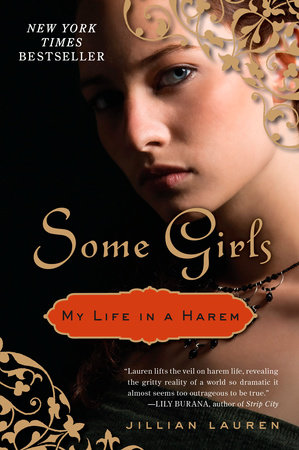 INTRODUCTION
Spending her last thirty dollars to catch a yellow cab to the airport, restless and determined eighteen year–old Jillian Lauren was at the precipice of an incredible journey. One that would and take her halfway around the world, shatter her illusions, and altogether challenge her sense of self. Lauren would become part of the harem of Prince Jefri Bolkiah of Brunei, emerging from the experience only a couple of years older, but infinitely wiser.

Sone Girls traces Lauren’s life from growing up in suburban New Jersey, to living with artist friends in a gritty East Village apartment, to her arrival in an art filled, gilded palace in Borneo. After dropping out of NYU theater school, Lauren follows a tip about upcoming audition, where a “casting director” promises a rich businessman in Singapore will pay American girls $20,000 to stay for two weeks and spice up his parties. Soon, it is revealed that Lauren, and a host of other international beauties, will spend time entertaining the charming, yet taciturn, Prince Jefri Bolkiah of Brunei, nicknamed Robin, and his entourage.

Jillian was one of the first Western women to infiltrate this modern–day iteration of an ancient institution. As she recounts the lavish parties, a parallel tale unfolds—rich in an entirely different way—of Jillian’s quest for her identity. Knowing little of the etiquette and duties expected of her, Lauren quickly learns the unwritten rules of harem life. Evening parties are a competition, with the ladies all vying for the playboy Robin’s attention—not just for sport—but for survival.

Jillian is intoxicated by the riches, the glamour, and above all by the Prince’s charm. She learns to play the role of a modern day Sheherazade to keep his interest. But eventually, amid the late night discos, extravagant shopping sprees and diamond–faced Rolexes, catering to Jefri’s capricious whims takes its toll. Lauren ultimately comes to question whether this prince’s kingdom really is the happily ever after she imagined. She leaves set on a different course entirely—to find her birth mother and eventually adopt a baby boy.

With poignant storytelling, at times heartbreaking, yet hopeful, Some Girls is the story of a young woman’s remarkable search for identity.

Author and performer Jillian Lauren grew up in suburban New Jersey and fled across the water to New York City. Her memoir, Some Girls: My Life in a Harem, was published by Plume on April 27 2010.

Her novel, Pretty, will be published by Plume in May 2011.

Jillian has an MFA in Creative Writing from Antioch University. Her writing has appeared in Vanity Fair,Flaunt Magazine, Pindeldyboz Magazine and Opium Magazine, among others.

She has read at spoken word events across the country and has recently worked with directors as diverse as Steve Balderson, Lynne Breedlove and Margaret Cho.

She is married to musician Scott Shriner. They live in Los Angeles with their son.

A CONVERSATION WITH JILLIAN LAUREN
Q. Some Girls is the story of your experiences in the sex industry, including an 18 month period living in the harem of Prince Jefri Bolkiah of Brunei. Why did you want to share your story?

I think it’s important for women to be truthful about their lives, particularly women on the fringes of society, who often keep silent because we’re led to believe that our stories are something to be ashamed of. We let our stories be told by others, usually men, and we wind up repeatedly being the bodies left behind by serial killers or the hookers with the hearts of gold. I wanted to tell my own story: how I became a sex worker and what it did to my life and my dreams. I wanted to portray the complexity of the experience and to present an emotional journey that I believe will be familiar to many women, even those to whom the events of the narrative may seem outrageous.

Q. The book is a brutally honest, unapologetic memoir. How were you able to get to the point in your life where you could talk candidly and without shame about your experiences in such extreme situations?

Eighteen years passed before I was able to tell this story. It took that long to be ready, from both a craft standpoint and an emotional standpoint, to do the story justice. For me, the trick to writing about such a wild and often dark time in my life was to have a stable foundation. I have a pretty boring life now, and I mean that in the best way. I write; I take care of my family; I go to yoga. I’m lucky that I was able to emerge from the period of time I describe in Some Girls with my health and my sanity. And I’m lucky that I was then able to assemble a life for myself in which I felt safe enough to tell my story.

Q. You grew up in a middle class family in suburban New Jersey—not exactly a background most people would associate with international concubines. How did you end up working in the sex industry?

A lot of different factors contributed to my decision to go into sex work, most prominently my burning desire to be on a stage and my difficult home life. By the time I turned eighteen and I got the job offer in Brunei, I was already dancing in strip clubs and working for an escort service. It was always an innate quality of mine to yearn for adventure, to seek out an extraordinary experience. So when a Prince invited me halfway around the world, of course I said yes. That was who I was at the time.

Q. What lessons about life and humanity did you learn from the time you spent in the Brunei harem? Anything that you think would particularly surprise people?

The real lessons for me were learned as I looked back and reflected. I was able to discover a different level of compassion for both myself and for the other people who shared my story. I looked at pictures of myself from that time and I said, What was so wrong with me? Why did I hate myself so much? I was beautiful. I was hopeful. I was brave. I was adorable. I can see it now clear as day, but I couldn’t see it then. The story is about struggling to love yourself and learning to forgive yourself.

Q. In the book, you talk about having been adopted and share your curiosities about what your birth mother looked like and whether or not you got certain traits from her. How do you think being adopted affected the course of your life and the decisions you made?

It’s hard to say how adoption affected the course of my life, because being adopted is such an integral part of who I am. Adoption is a wonderful thing, but it definitely has profound implications for all of the parties involved. I think all of our stories are, in one way or another, about piecing together the puzzle of our true selves. My search for my birth mother, as written about in Some Girls, is a piece of that puzzle.

Q. You had a strained relationship with your father growing up and write about how he would make negative remarks about your body, weight and intelligence and even become physically abusive with you, your brother and mother. Have you come to terms with your father’s treatment of you?

I’m not sure I’ve come to terms with it. I suspect that coming to terms with my relationship with my father is probably going to be a lifelong journey. When you’re dealing with something like abuse, people often expect it to be a black and white situation: abuser and victim, bad guy and good guy. But in my case it’s more complicated than that. Because my father is a very loving and generous man in many ways and I care about him a great deal, but he’s also a flawed and tragic character who inflicted a lot of damage. So the question for me is how do you portray that in a compassionate and honest way. Writing about my father was probably the most painful part of the process for me and required the most soul–searching.

Q. Have your parents read your book? How much do they know about what you experienced?

My parents were already aware of some of my adventures, but certainly a handful of the revelations in Some Girls were a surprise to them. My parents are hurt by the book and that saddens me a great deal. But it was a story I was compelled to write and I believe it has the potential to connect with many women. I did my best to write a deeply honest and compassionate account of that time in my life and my family was part of that story. I had hoped my family would be more supportive of the book, but I have faith that we’ll work through this difficult time. We’ve gone through worse.

Q. There has been some hoopla in recent years over the validity of memoirs. What would you say to someone who might question the truth and accuracy of your story? How was the book corroborated?

Of course the matter of lying in memoirs is on everyone’s minds right now. I definitely had to produce photographs and documents to satisfy my publisher. But on a more personal level, I wrote this book as an exercise in radical honesty. I’ve always kept journals and I was incredibly fortunate to have those documents to draw on. The deeper question for me was more about the emotional authenticity of the work. It’s the central question in any memoir and it was something that I had to examine and reexamine with every draft I wrote.

Q. What do you hope readers take away from your book?

Writing this book was in part an attempt to be honest about my struggle to love myself and hopefully to invite other women to recognize a shared experience. Most of the women reading the book will not have had the experience of being an international teenage escort, but I believe the emotions involved are surprisingly universal.

Q. You are now the proud mother of a son, Tariku, whom you and your husband, Weezer bassist Scott Shriner, adopted. How did you come to the decision to adopt? How did your own experience affect your decision?

Scott and I had always considered adoption. The idea of adopting a baby was always close to my heart, probably due to the fact that I was adopted myself and felt a need to come full circle with it. But our adoption plans were put into motion more quickly than we’d expected when we experienced unexplained infertility. It was a challenging and difficult time for us, but I’d go through every moment of it again a hundred times over if I knew that Tariku was waiting for us at the other side. Much like my experience in Brunei, a time that felt hopeless and overwhelmingly painful at the time turned out to be a gift in the end.

Q. If you could give advice to your younger self, what would you tell her?

I’d probably tell her to learn to breathe, to learn to sit still, to learn to give herself the love she was looking for in others. But she’d never listen to me anyway.

Learn More About Some Girls
print
Back to Top