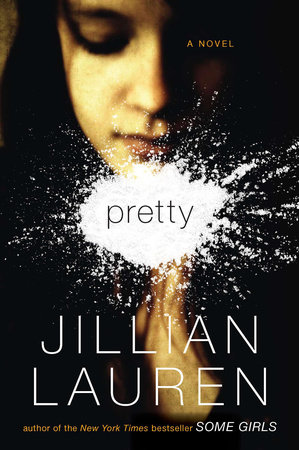 Bebe Baker is a survivor. A transplant from Toledo, Ohio, Bebe follows her musician boyfriend Aaron to Los Angeles, only to find herself trapped in a life of stagnation and addiction. Following a drug and alcohol-fueled dispute, a devastating car accident leaves Aaron dead and Bebe lost, scarred, and broken.

Now, as a resident in a halfway house called Serenity, Bebe is trying to pull her life together. She is mere hours away from completing her hairdressing training and seems on the verge of fulfilling her dream of giving up the dank hopelessness of Los Angeles for the more promising San Francisco. However, a mentally unstable boyfriend, an unexpected pregnancy, and a surprising visitor from her past sends her on downward spiral that may or may not destroy the new, meager life she has struggled to build.

Pretty is a story about loss and survival. It is about facing one’s past head on and coming to terms with one’s deep flaws. It is a novel about finding faith in oneself to move on.

Jillian Lauren is the author of the New York Times bestseller Some Girls and has an MFA from Antioch University. She lives in Los Angeles with her son and husband, Weezer bass player, Scott Shriner.

A CONVERSATION WITH LAURA HARRINGTON
Q. Pretty deals heavily with addiction and Bebe’s life in and out of Serenity. How did you go about constructing this book? What sort of research did you do? What drew you to the topic?

I always included details from my own life in my fiction. Though the narrative isn’t autobiographical, Pretty is a collage of people I’ve known, places I’ve lived and questions I’ve struggled with.

Addiction is one of the themes of the book from which I drew heavily on personal experience. I’ve battled addiction issues for much of my life, as have many people I love. I think addiction is a trope that eloquently expresses the compulsive rhythms of contemporary culture. Addiction is also a great vehicle with which to explore the theme of faith. Substance abuse is a monstrous, ruinous thing and it’s nearly impossible to overcome without a profound shift of consciousness on the part of the addict. I suppose there are ways other than faith to achieve that shift, but I personally don’t know of any.

However, there are aspects of Pretty that required more formal research, such as the worlds of mental illness and religion.

Q. The book is told from Bebe’s point of view. How did you go about building a “voice” for Bebe? What was the most challenging part about being in her head?

The voice of a particular work is usually the first thing that comes to me, and that was certainly true for Pretty. I can always tell that I’ve got a new project brewing when there’s a voice in my head clamoring to be heard and that voice isn’t mine. Voice is actually the most mysterious part of the writing process for me, because the formulation of it isn’t conscious and it’s not a function of craft or discipline or any of those other things that come into play later on. When it comes to the voice of a character, I think of myself more as a channel or a conduit and figure my job is just to open up and listen

Q. Los Angeles is framed as an unintended landing place for Bebe. What is your personal experience in L.A. and how much did it inform the writing of this book?

Unlike Bebe, I moved to Los Angeles intentionally. But I never intended to stay. Yet ten years later here I am and a move doesn’t seem to be anywhere on the horizon. So I guess Bebe’s relationship with Los Angeles and with her whole environment is about my own experience of finding a home in an unexpected place. That theme is so important that Los Angeles turns into almost another character in the book.

Q. There’s a fair amount of attention to beauty, “prettiness,” or traditional notions of what “pretty” means. Where do you stand on the culturally constructed idea of prettiness in this country? What did you want to say through this novel?

My own relationship with culturally constructed beauty ideals is complex and I wouldn’t say that I have a clear-cut ethical stance on the matter. But I do recognize the damage these ideals can do to a woman’s concept of self-worth. Pretty is set in the world capital of the over-valuation of physical beauty. Bebe is dealing in with feeling twisted and ugly, so that’s set into stark relief by the value system that permeates the culture around her.

At the same time, much of the humor and friendship in the book happens at the beauty college Bebe attends. So while Bebe’s struggle with beauty leads her to some very dark places, it also provides a context for the wisdom that eventually becomes her salvation.

I’m working on a book about how we construct identity, as explored through the subject of adoption.

Half the Kingdom
Lore Segal

In Her Absence
Antonio Munoz Molina

I Become a Delight to My Enemies
Sara Peters

A Slanting of the Sun
Donal Ryan

Autobiography of a Corpse
Sigizmund Krzhizhanovsky

Distance
Jack Hodgins
Back to Top