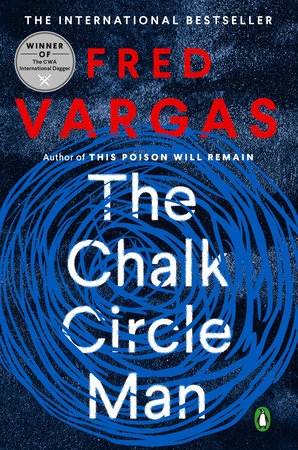 INTRODUCTION
“Is this a practical joke, or the work of some half-baked philosopher? Whatever it is, the blue chalk circles are still sprouting like night-time weeds on the capital’s pavements, and they’re starting to attract the attention of Parisian intellectuals” (p. 22).

There is little that excites the inhabitants of a city as cosmopolitan as Paris, but it was, perhaps, the very randomness of the blue chalk circles that first created such a stir. Under cover of night, someone—likely a man, according to the press—has been drawing blue circles around a motley assortment of found objects. A twig, a dog turd, and a bottle top are just three of the more than sixty items encircled and marked with the cryptic words, “Victor, woe’s in store, what are you out here for?” (p. 25). Speculation runs high, but the police remain indifferent to the man’s identity until the latest circle surrounds “a woman with her throat cut, staring up at the sky” (p. 57).

Comissaire Jean-Baptiste Adamsberg is new to the Paris police force. A recent transfer, Adamsberg is also something of a celebrity, having solved an astonishing number of murder cases in his native Pyrenees. He alone found something menacing about the chalk circles and insisted that the circles be photographed and cataloged well before they proved to be deadly. Now, he can only sit and wait until more circles—and more bodies—appear.

But—much to his subordinates’ confusion—Adamsberg is not the sort to become consumed by a case, however peculiar. Lately, he has been preoccupied by the thoughts of two women—one new and the other his long lost love. Shortly before the murder victim was found, a woman named Mathilde Forestier had appeared at the station demanding that the police help her find Charles Reyer, the “Beautiful Blind Man” (p. 5) she had recently met in a café. A famous marine researcher with a quirky theory about the days of the week and a penchant for trailing and surrounding herself with some most unusual friends, Mathilde intrigues the otherwise jaded Adamsberg.

It has been nine years since Camille, Adamsberg’s “petite chérie,” abandoned him in a Cairo hotel, but she has never ceased to haunt him. He had taken some solace in imagining her adventures in some distant land until an unwelcome possibility presented itself—she might be dead. “What would be the point after that of bothering to track down murderers, or counting the spoonfuls of sugar in his coffee . . . if Camille wasn’t somewhere on the planet?” (p.71). He contacts Mathilde, and in exchange for helping her find Charles, she, in return, promises to help him find news of Camille.

Soon, the handsome but surly blind man joins Mathilde’s household, where she and Clémence Valmont, the spectacularly ugly septuagenarian assistant she similarly collected, catalog her undersea findings. But as the murderer claims another victim, and it becomes clear that Mathilde contrived her meeting with Adamsberg and knows far more about the Chalk Circle Man than she at first revealed.

The latest installment in Fred Vargas’ internationally best-selling mystery series to be available in English, The Chalk Circle Man features Paris’s tantalizing new commissaire along with an irresistible cast of eccentric characters. Stylish and deliciously gruesome, they are rapidly solidifying Adamsberg a prestigious place in the pantheon of literary detectives.

Fred Vargas is the pseudonym of French historian, archaeologist, and writer Frédérique Audoin-Rouzeau. She is a number-one bestselling author in France and the author of eleven novels, including eight featuring Commissaire Jean-Baptiste Adamsberg. Her works have been published in thirty-eight countries.

Wash This Blood Clean from My Hand

The Ghost Riders of Ordebec

The Death of Kings

The Cook of the Halcyon

The Other End of the Line

A Climate of Fear

An Uncertain Place
Back to Top