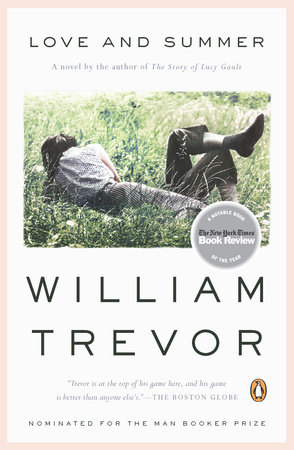 It’s summer in Rathmoye in the 1950s and in the hush of the funeral for Mrs. Connulty, a stranger appears, surreptitiously taking photographs of the burial and the bereaved. Afterward, Florian Kilderry, who has come to town to take pictures of the burned down movie house, quietly slips away—unnoticed by all but Ellie Dillahan. That moment is the beginning of a relationship whose effects will ripple outward from the two young lovers into the lives of other citizens of Rathmoye. William Trevor’s Love and Summer is the exquisite rendering of one languid summer in that small town, an evocative exploration of love, memory, responsibility, and remorse. It’s a stunning display of the emotional subtlety and linguistic grace for which Trevor is revered.

Over a career that has spanned fifty years, Trevor has built a reputation as one of the finest writers in the English language, an author whose acute sensitivity to the complexities of the human heart is matched only by the elegance and eloquence of his prose. In Love and Summer, his fifteenth novel, Trevor demonstrates his unerring understanding of the complications of loving and being loved, of the huge gulf between one’s potential and one’s reality, of the fragility of life and the immutability of memory. In Love and Summer, the memories of his characters drive the novel as much as their actions do.

Florian feels “memory did not let go” (p. 137), and the people of Rathmoye prove him right. Mrs. Connulty’s death sets the main relationship of the novel in motion, but it also frees her daughter—known only as Miss Connulty—from living under her shadow. Rather than grief, Miss Connulty finds a grim satisfaction in having survived her mother (in both senses of the word), and she wears her mother’s jewels as a symbol of her newfound freedom. As she goes through the paces of caring for the family home, Miss Connulty is drawn into the memory of her brief affair with a married man and of the fateful event that severed her relationship with her mother. Like Miss Connulty, Ellie’s husband Dillahan is also plagued by heartache, haunted by the loss of his first wife and their child, and of the brief moment of carelessness that precipitated their deaths. For both characters, memory captures and condenses heartache, and their separate pasts soon become entwined with the growing romance between Ellie and Florian.

As summer in Rathmoye slowly passes, Ellie falls deeply in love with Florian, opening up a side of herself that she never knew existed. An orphan from the convent before her arranged marriage to Dillahan, Ellie had always been grateful for what she was given, and never asked for much, but Florian totally alters her perspective, making everything without him seem shadowy and dull. Existing only in anticipation of their meetings at his family’s crumbling estate, Ellie experiences passionate love for the first time. Florian, however, is conflicted. Intent on leaving Ireland once his family’s home has been sold, Florian wants to create a new life, one without the memories of his deceased parents or of Isabella, the woman who broke his heart.

Love is woven throughout the novel: love given but not received, received but not given. With each character’s story folded into another, Trevor depicts life in Rathmoye as an intermingling of daily banalities and emotional brutalities. A novel that begins with a death and ends with a departure, Love and Summer is the story not only of one season, but of the years and events that lead up to that summer—the loves, losses, tragedies, and struggles that converge within one town, ignited by one sudden love affair.

William Trevor was born in Mitchelstown, Ireland, and was educated at Trinity College, Dublin. Having worked as a sculptor and a copywriter, Trevor published his first novel in 1958. Since then, he has written numerous novels, collections of short stories, and plays, as well as works of nonfiction and children’s literature. Trevor has won the Hawthornden Prize, the Whitbread Award, the Giles Cooper Award, and has been shortlisted for the Booker Prize five times. In 1999, in appreciation for his work, he was awarded the David Cohen Prize by the Arts Council of England, and in 2002 he was knighted for his contribution to literature. He lives in Devon, England.

A Girl Is a Half-formed Thing

The Whole World Over
Back to Top