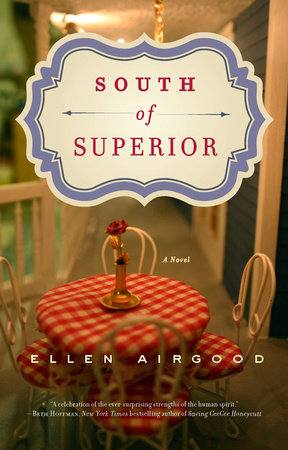 INTRODUCTION
When Madeline Stone walks away from her Chicago life and moves five hundred miles north to the coast of Lake Superior, in Michigan’s Upper Peninsula, she isn’t prepared for how much her life will change. Charged with caring for an aging family friend,

Madeline finds herself in the middle of beautiful nowhere with Gladys and Artubus, two octogenarian sisters—one sharp and stubborn, the other sweeter than sunshine. As she is drawn into the dramas of the small, tight-knit town, Madeline learns that it’s a place where times are tough and debts run deep, but where friendship, community, and compassion run deeper.

A debut novel full of heart, South of Superior shows that there is a deep reward in caring for others, that one who is poor in pocket can be rich in so many other ways, and that happiness often comes from the smallest gestures.

Ellen Airgood runs a diner in Grand Marais, Michigan. This is her first novel.

AN ESSAY FROM ELLEN AIRGOOD
From Waitress To Writer

I grew up on a small farm, the youngest of four children. My father was a blacksmith and a schoolteacher. For the last nineteen years I’ve been a waitress in Grand Marais, Michigan. I was twenty-five when I came to this tiny, Lake Superior town, on a camping trip with my sister, and fell in love with the man who made my cheese sandwich and chocolate malt at the local diner. We met, exchanged assessing, almost challenging gazes, and six months later we got married. I told my sister we would, on the way back to our campsite that first day. “You’re crazy,” she said worriedly. But pretty soon she grinned, shook her head, started getting into the spirit of it. “Well,” she said. “This is going to be interesting.” And it has been.

I’ve never been sorry. My husband Rick and I run a diner together, a job which is always consuming, often punishing, and hugely fulfilling. Most of what I know about maturity and compassion, not to mention story, I’ve learned from waiting tables. We work eighty to a hundred hours a week together almost year around, and one way or another we’ve faced the constant barrage of setbacks and frustrations and equipment failures that restaurant work is, the high stress and long hours. There is so much satisfaction in it, though: the goodness of hard work, the joy of feeding people a meal they love, the delight of long friendships, the pride in a job well done. All kinds of people come here from all kinds of places, and we get to meet them, to hear their stories, and pretty often we get to make them happy for the time that they are here.

This is the route I took to becoming a writer. I didn’t get an MFA or study writing in school. I could have learned about life anywhere, but fate brought me here, to the end of the earth and a tiny town that time forgot. My customers have given me good practice as a storyteller, too. It’s a matter of survival. If I can entertain people, draw them over to my side, they won’t murder me when I’m the only waitress of the floor and the cook is swamped and the wait is long and we’re out of silverware and I didn’t know the fish was gone when I took their order.

At Home on Ladybug Farm

The Geometry of Sisters

The Senator’s Wife
Back to Top