The Violets of March Reader’s Guide 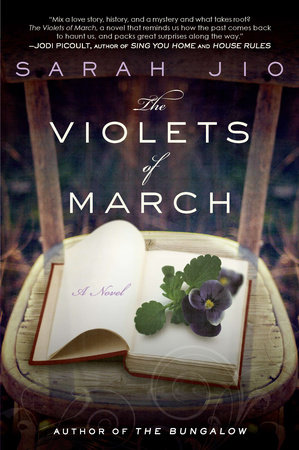 The Violets of March Reader’s Guide

INTRODUCTION
Emily Wilson would be the first to admit that her life has seen better days. Her best-selling novel debuted eight years ago, she has struggled to write since, and she is now coming face-to-face with divorce from her once perfect husband Joel. Emily needs to heal, and she decides the best place to renew herself is across the country in a dear spot from her childhood: Bainbridge Island.

While staying with her beloved Aunt Bee, Emily’s attempt at healing becomes complicated when she discovers the diary of a mysterious woman named Esther. Esther’s story leads Emily on a path through a timeless love story, a painful series of misunderstandings, and a devastating secret that has vexed her family for decades.

The Violets of March is a story about love and fate. It’s about the power such love has over us over space and time, and how it can haunt us when it goes unfulfilled. It defines love as an eternal bond that may drive us toward irrationality, but, ultimately, brings us hope for happiness and forgiveness.

Sarah Jio is a frequent contributor to major magazines, including Real Simple, Glamour, Cooking Light, and Redbook, and is also the health and fitness blogger for Glamour.com. She lives in Seattle with her family. The Violets of March is her first novel.

A CONVERSATION WITH SARAH JIO
Q. There are three interweaving stories that run throughout the book: Emily’s story, Esther’s diary, and Years of Grace. What challenges did you face bringing those stories together?

Three stories in one book can get unwieldy, so I was careful to keep each thread neat and tidy—like three balls of yarn, weaving them together without introducing too many tangles or missed stitches. In doing so, I spent a lot of time outlining the key events of Esther’s story, then planning just the right moments in the book to plant clues and make key revelations. I enjoyed putting little hints in the diary for Emily to discover in her present day experience on the island. This was fun work! And, the Years of Grace thread was an absolute delight to work with. I stumbled upon this book purely by chance and fell in love with it. And, readers should know that it is indeed a real book (not just something I made up!)—a classic from the 1930’s that is most likely forgotten by present day readers. I challenge any and all to read this beautiful book. It had shocking parallels to Esther’s story in Violets, and made the perfect book for my characters to read, love and think about in their journeys.

Q. You write affectionately about Bainbridge Island and its denizens. Do you have a specific connection to the island? What inspired you about the island while writing this book?

I’m so pleased to hear that my love for Bainbridge Island came through in my writing. It’s a very special place to me. I grew up just over the bridge, in the little town of Poulsbo, Washington, and spent many happy hours of my life on the island, playing on its shores. Bainbridge has charmed me from an early age, so it was a natural place for me to set my story. I have always felt that it has a certain beauty and peace that is absolutely unmatched. While I tried to preserve the island’s characteristics and feeling, I did take artistic license in places (for instance, not all streets mentioned in the book exist or are geographically accurate; nor do violets bloom in March!)—but after all, this is a work of fiction!

Q. There are multiple characters in this book across different time periods. How do you go about constructing so many fully fleshed-out characters? What aspects of character are most important to you?

What it boils down to, for me, is immersing myself in the characters as I write—really trying to hear their voices and think about what choices they would make, versus what choices I would make. What helps me, also, is thinking about people in my life who may remind me, a little, of my characters (not that any of the characters in Violets are modeled after real people, because that isn’t so). But, the strong and memorable characteristics of people in my life definitely play a role in character-development in my fiction work. For example, the bit about Bee enjoying her usual breakfast of sourdough toast with softened butter and whipped honey—this was borrowed from my late grandmother, herself an artist. I’ve found that paying attention to the traits, quirks and habits of those around you can help create realistic and loveable characters on the page.

Q. So much of The Violets of March is about true love and fate. Where do you stand personally on these topics? Do you see parts of yourself in Emily?

While my own life and story does not mirror Emily’s in the slightest—I’m happily married with three young sons—I’ve always been curious about others who haven’t been so lucky in love, others who may be looking back on their life and wondering about their first love, like the love Esther and Elliot shared. And, a hopeless romantic at heart, I guess I believe that if you truly loved someone once, that flame continues to burn, forever maybe. I really enjoyed toying with this idea in Violets.

Q. What are you working on now? Will we be reading more in the life of Emily Wilson?

I just completed my second novel, The Bungalow, which will be out from Plume in April of 2012. While the book won’t be a continuation of Emily Wilson’s story, it does pluck one key character from The Violets of March for a brief cameo appearance!The Bungalow, which I’m so very excited about, is the story of a woman, who, at the very end of her life, receives a letter that triggers haunting and bittersweet memories of her time in the South Pacific during World War II, an unfinished love story, an unspeakable tragedy, and a mysterious beach bungalow at the center of it all. And, I am also hard at work on my third novel. Stay tuned for more on that!


Learn More About The Violets of March
print

The Invisible Husband of Frick Island

Dear Carolina
Back to Top