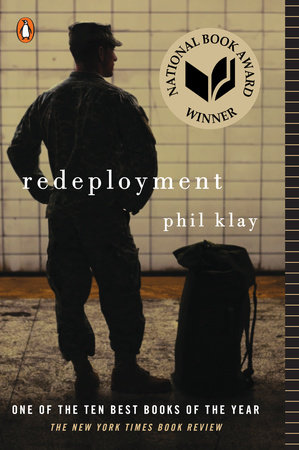 A Marine returns home to his dying dog. A chaplain suspects his soldiers of war crimes. A well-meaning Foreign Service officer is surrounded by bribery and diplomatic inanities. These are the characters that populate Redeployment, a collection of twelve first-person narratives detailing the lives of soldiers while in Iraq and after they return home. Debut author and ex-Marine Phil Klay mines the experiences of Americans caught in the brutal collision of morality, duty, brutality, and chaos that characterized the military action in Iraq, and he uses this chorus of voices to create an intimate, highly detailed portrait of a much-discussed but little understood war.

The Iraq War generated strong opinions on both ends of the political spectrum and certainly Klay’s characters wrestle with the purpose and corruption of the war, both confirming and challenging the public’s perceptions. But Klay doesn’t have a partisan axe to grind—his characters reject both the pseudo-patriotic bluster of conservatives and the cloying sympathies of liberals—and he focuses instead on the individuals both responsible for and caught in the political and military machinations. At the heart of Redeployment is the central psychological conflict of war: well-meaning Americans are dropped into violent and traumatizing circumstances, asked to kill, and then expected to reset to civilian life when they return home. The cognitive dissonance of good people doing terrible things, of their guilt and desire for psychological escape, punctuates many of Klay’s stories, but he also explores the mundane yet necessary players—the paper pushers, the engineers, the State employees—who also carry the psychological burden of war without the heroics.

Klay balances economy of language with perceptive detail, and his writing is incisive and emotionally charged; a single sentence can suddenly shift the reader’s assumptions and allegiances. He is especially skilled with dialogue—the soldiers’ profanity, jargon, despair, and dark humor—and each of his characters is unique and fully realized, no matter how briefly they may appear in the book. By turns tragic, witty, and disturbing, all the stories in Redeployment are sharp and briskly paced, and every one provides a new lens through which to understand the war. Taken independently, each story is a finely crafted, bracingly honest narrative; taken together, the stories create an immersive experience. Redeployment is a stunning debut that marks the arrival of a bold, insightful writer, one who is certain to be recognized as the voice of the Iraq War generation.

1. What does the title, “Redeployment,” mean in the context of the first story in the collection?

2. Have you or anyone close to you ever served in the military? If so, did Klay’s stories resonate with your and/or their experience?

3. In “Unless It’s a Sucking Chest Wound,” the narrator refers to “the idea of Iraq all my civilian friends imagine when they say the word, an Iraq filled with honor and violence” (p. 238). What was your “idea of Iraq” before you read the book? Did the book confirm or change your view?

4. Klay’s book is a moving and satisfying read, but also extremely emotionally challenging. Which parts did you find the most difficult? What was your favorite story?

5. The narrator of “Bodies” tells the story of a Marine who had burned to death clutching a small rock in each hand. He describes it as “the worst burn case we ever had. Worst not in charring or loss of body parts, just worst” (p. 69). Why?

6. If you were to describe Klay’s writing in three words, what would they be?

7. The stories in Redeployment often include military terms that might have been unfamiliar to you prior to reading the book. If so, what effect did this language have on you?

8. In “Psychological Operations,” why does Waguih describe to his father the profanities he used against Laith al-Tawhid (p. 210)? Why does he tell Zara?

9. Reading a collection of short stories is a very different experience than reading a novel. How did you approach the book? What enjoyment do story collections provide that longer works (novels and nonfiction) do not?

10. Look at the last paragraph of the last story in the book. How is this an effective end to the entire collection?

Phil Klay is a veteran of the US Marine Corps who served in Iraq’s Anbar Province as a Public Affairs Officer. A graduate of Dartmouth College, he received an MFA from Hunter College. His writing has appeared in the New York Times, the Washington Post, and Newsweek, among other publications. Redeployment is his debut collection and won the National Book Award in 2014.
Learn More About Redeployment
print

All the Pretty Horses
Cormac McCarthy

Yiddish for Pirates
Gary Barwin
Back to Top