On Being Different Reader’s Guide 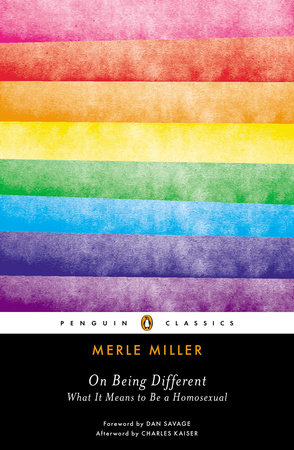 On Being Different Reader’s Guide

print
On Being Different Reader’s Guide

When Merle Miller’s article, “On Being Different: What It Means to be a Homosexual,” was published in The New York Times Magazine in 1971, the gay revolution in America was only eighteen months old. It had begun in June 1969, when the gay patrons of the Stonewall Inn in New York’s Greenwich Village had taken the nearly unprecedented step of fighting back when the police raided the place.

One year later, on the first anniversary of the Stonewall Riots, more than five thousand people marched up Sixth Avenue in Manhattan and held the city’s first “Gay–In” in Central Park. New Yorkers had never seen anything like it, and even many of its most liberal citizens were horrified by the brazenness of this celebration. Similar commemorations were held in Chicago, San Francisco, and Los Angeles.

Just how horrified liberals were became clear less than three months later when Harper’s Magazine—a pillar of the liberal establishment—published a rant by Joseph Epstein under the headline “The Struggle for Sexual Identity.” Epstein described homosexuality as “anathema” and homosexuals as “cursed . . . quite literally, in the medieval sense of having been struck by an unexplained injury, an extreme piece of evil luck.” He continued, “If I had the power to do so, I would wish homosexuality off the face of the earth” because it caused “infinitely more pain than pleasure to those who are forced to live with it; because I think there is no resolution for this pain in our lifetime . . . and because, wholly selfishly,” he was “completely incapable of coming to terms with it.”

It was the violence of these words that finally propelled Merle Miller out of the closet at the age of fifty–three, after two New York Times editors he was lunching with expressed their admiration for Epstein’s piece.

When Miller’s piece was published in The New York Times Magazine a few months after that lunch, he became the first prominent writer ever to reveal his homosexuality in the pages of that distinguished publication. But his piece was just one example of the gigantic energy that was released by Stonewall—after being bottled up for many, many centuries.

In 1969, the only gay organizations with any significant public identity were the Mattachine Society and the Daughters of Bilitis. Just four years later, you could join a radical Gay Liberation Front, Radicalesbians, a more mainstream Gay Activists Alliance, the National Gay Task Force, the Lambda Legal Defense and Education Fund, and hundreds of other groups in New York, across the country, and around the world. “It was like a prairie fire: let it roar,” said Jim Fouratt, a founder of the Gay Liberation Front in New York. “People were ready.”

The revolution that began that summer night in June 1969 led to the most rapid improvement in the status of any minority group in the history of the United States. Miller’s two articles in On Being Different are a perfect time capsule, providing a powerful picture of how gay people were being treated in 1971. Dan Savage’s foreword and Charles Kaiser’s afterword describe the extremely rapid changes in gay life in America since then. As Kaiser states, “The last forty years have been the greatest time to be gay since the era of Aristotle.”

Merle Miller was born in 1919 and grew up in a small town in Iowa. He attended the University of Iowa and the London School of Economics before joining the army. During World War II he won two Bronze Stars while covering the conflict for Yank, the distinguished army weekly. He later returned those commendations to protest U.S. involvement in the Vietnam War. He was an extremely early opponent of McCarthyism in the late forties and early fifties, writing an anti–McCarthy novel in 1949 and a report about blacklisting in the broadcasting industry, published as a book by the American Civil Liberties Union three years later. Miller went on to write numerous novels, plays, and screenplays. His most successful book was Plain Speaking, an oral history of Harry Truman, which was published in 1974. He died in 1986.

Learn More About On Being Different
print

The Cross of Redemption

The Time of My Life

Fires in the Mirror
Back to Top