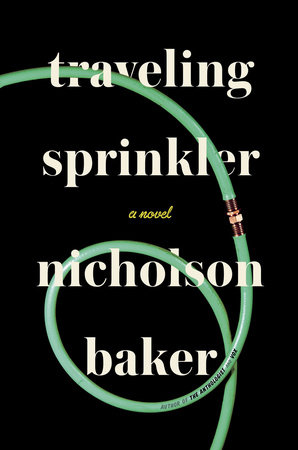 Paul Chowder, the poet protagonist of Nicholson Baker’s widely acclaimed novel The Anthologist, is turning fifty-five and missing his ex-girlfriend, Roz, rather desperately.

As he approaches the dreaded birthday, Paul is uninspired by his usual artistic outlet (although he’s pleased that his poetry anthology, Only Rhyme, is selling “steadily”). Putting aside poetry in favor of music, and drawing on his classical bassoon training, Paul turns instead to his new acoustic guitar with one goal in mind: to learn songwriting. As he struggles to come to terms with the horror of America’s drone wars and Roz’s recent relationship with a local NPR radio host, Paul fills his days with Quaker meetings, Planet Fitness workouts, and some experiments with tobacco. Written in Baker’s beautifully unconventional prose, and scored with musical influences from Debussy to Tracy Chapman to Paul himself, Traveling Sprinkler is an enchanting, hilarious—and very necessary—novel by one of the most beloved and influential writers today. 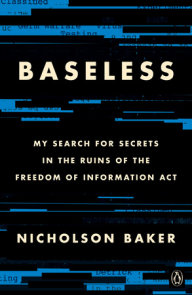 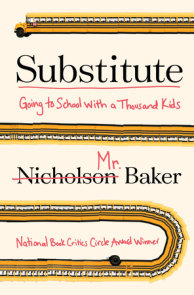 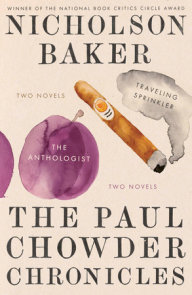 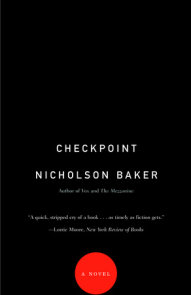 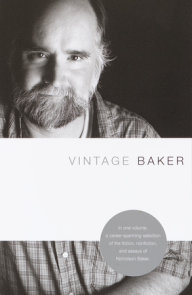 See all books by Nicholson Baker

Nicholson Baker is the author of ten novels and numerous works of nonfiction, including Baseless, The Anthologist, The Mezzanine, and Human Smoke. He has won the National Book Critics Circle Award, the Hermann Hesse Prize, and a Katherine Anne Porter… More about Nicholson Baker

“In sparkling and witty prose, Baker reminds readers why he’s one of the masters of the contemporary novel.”
—Kirkus, STARRED REVIEW

“[Traveling Sprinkler] is a delight: funny, tender and endearingly bonkers…[Baker imbues] Chowder not only with a feverish intellectual curiosity but with a generosity of spirit….every page contains wonderful writing, and ridiculous but intriguing digressions. Baker has a strange and interesting mind, and a life-enhancing wit to go with it. Traveling Sprinkler sees him at the top of his form.”
—Terence Blacker, The Independent, UK

“There are lots of reasons to love Traveling Sprinkler: Baker gets sweeter with each new book, and underneath the sweetness lie witty arguments about poetry and song and taste.”—Lorin Stein, The Paris Review

“We’re at the point where saying that Nicholson Baker is one of our truly greatest writers isn’t pure hyperbole…and with [Traveling Sprinkler], which features a return from the main character of 2009’s The Anthologist, he’s piling another great book atop his impressive stack.”– Flavorwire, 10 Must-Read Books for September

“Nicholson Baker’s utterly charming new novel, Traveling Sprinkler, is discursive, quirky, and consistently engaging….an unmitigated pleasure to read…His characters struggle with grief, regret and existential angst, but they are happy, lucky, warm-hearted people—and we are eager to remain in their company for as long as their author will let us.”—Raina Lipsitz, Pittsburgh Post-Gazette

“Paul [Chowder] is such a figure: idiosyncratic, unashamed of his quirks and ticks and odd obsessions, not unlike the author who created him….an example of the novel as slice of life, full of digressions that are themselves the point.”—David Ulin, Los Angeles Times

“As always with Baker, the many pages spent discussing the details of a protagonist’s activities and interests can take on a hypnotic allure . . . Baker’s great achievement is to make description and characterization do the work of narration . . . Baker can write pages of transfixing details that end up revealing the emotional workings of his narrators.”
—Ken Tucker, The Daily Beast

“You read [Nicholson Baker] for the way he wields his enviable vocabulary to capture the often hilarious and surprisingly intriguing and endearing mental machinations of his eccentric characters. You read him because, at his best, he makes you sit up and take notice of things you tend to overlook.”—Heller McAlpin, NPR.com

“In Traveling Sprinkler, a sequel of sorts to The Anthologist, Nicholson Baker resurrects the incorrigible procrastinator Paul Chowder…The literary sequel is a rare beast to begin with; Mr. Baker here joins the ranks of D.H. Lawrence, Evelyn Waugh and—I suppose if we wanted to go there—John Milton, all writers who dared to pen a follow-up to a masterpiece….Baker is as good a cultural critic as he is a novelist.”
—Michael Miller, The New York Observer

“Lucky for us, the writer’s block that poet Paul Chowder battled in the 2009 comic novel The Anthologist is still wreaking havoc with his creative process. His struggles continue in Nicholson Baker’s new novel, Traveling Sprinkler, the second to feature Chowder and his wonderfully wry and witty first-person narration….readers fell in love with Baker’s lovable but bumbling hero….endlessly fascinating…Chowder’s rambling this-is-your-brain on music musings on the bassoon — on Debussy’s “The Sunken Cathedral,” Paul McCartney’s “Blackbird,” Tracy Chapman’s “Change,” even the score for The Bourne Identity — are poetically charged and wonderful to read….a truly harmonious and wonderfully entertaining story.”
—Carol Memmott, Chicago Tribune

“Like the sprinkler, whose journey across a yard may look aimless, by the end of the novel, Paul has managed to nourish almost everyone he comes in contact with, including the reader. . . While his lyrics have a certain deadpan hilarity, Paul’s writing about music and poetry is thoughtful in its clarity. . . . [T]here is a method to Paul’s wooing, and the two dear, quirky people are impossible for a certain kind of reader – this one most definitely included – to resist.”
—Yvonne Zipp, The Christian Science Monitor

“In a sense, he is a modern-day troubadour, working to create a hit number, and by doing so, to earn the love of a lady….Chowder’s devotion to Roz is simple and beautiful, but for me, the best part of “Traveling Sprinkler” is the time he spends thinking about music….his protagonist’s observations are crisp and lively….a passionate book, one that will delight readers who respond to a congenial, if sometimes hapless, speaker describing the many things that enrich his life.”—Tom Zelman, Minneapolis Star-Tribune

“[Baker’s protagonist] makes a metaphor for his life from the gardening implement of the book’s title….There’s a narrative arc to this book, to be sure — it turns out to be a love story. But the real point is the language….[a] narrative with vivid imagery, unexpected juxtapositions and fresh metaphors.”
—Colette Bancroft, Tampa Bay Times

“Impeccable…oddly moving…[Baker] writes eloquently, even adamantly…This is a joyful book, and a melancholy book, and a “political” book not because it talks about drone warfare, but because it is titled Traveling Sprinkler.”
—Theo Schell-Lambert, San Francisco Chronicle

“I know of no other novelist as sweetly charming, so capable of life-affirming gusts of tender prose.”—Jason McBride, Toronto Globe & Mail

“Baker’s eccentric protagonist from The Anthologist, is back; this time around, he’s focused on songwriting instead of poetry. As it does in all his books, Baker’s prose shines with warm humor, sharp insights, and digressive attention to detail.”
—Deirdre Fulton, The Providence Phoenix Best of 2013