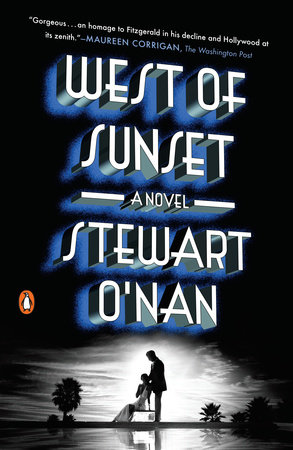 As a young man, F. Scott Fitzgerald believed that there were no second acts in American lives. By the age of forty, he was trying with all his might to prove that he was wrong.

When we meet him at the start of Stewart O’Nan’s scintillating new biographical novel West of Sunset, Fitzgerald is no longer the irresistible, golden icon of the Jazz Age, nor is his wife Zelda the daring, glamorous, baby-faced rebel of her youth. Zelda, now nearing thirty-seven, has been committed to a mental hospital—still lucid and winning at times but liable to sink into delusion or erupt into unreasoning violence at any moment. As for Scott, the soaring triumphs of The Great Gatsby and Tender Is the Night are behind him. A man preoccupied with truth, he ironically spirals ever deeper into falsehood. His greatest wishes now are to pay for Zelda’s care, to see his precociously talented daughter Scottie through college, and to somehow recapture some of his own tattered literary glory.

That glory, if he is to find it anywhere, lies neither on the verdant lawns of Princeton nor among the fabled pleasure palaces of Long Island. It lies instead in Hollywood, where Scott travels in hopes of building a new life as a screenwriter. Awaiting him there is an extraordinary host of old friends, including a muscular, pre-Casablanca Humphrey Bogart and a savagely witty post-Algonquin Dorothy Parker. Scott’s foremost literary rival, Ernest Hemingway, is not far off. But also waiting for Fitzgerald are some formidable problems. Fickle studio executives throw him on and off projects in revolving-door fashion. The frenetic party culture of 1930s L.A. threatens to erode whatever discipline he can muster. But the worst of his problems he has brought with him: an all too well-known weakness for cocktails and pills, as well as all the haunting memories of a glamorous but guilty past.

Some men, when drowning, clutch at straws. Others reach for a star. That star, for Scott, is Sheilah Graham, an English-born gossip columnist who might have passed for Zelda’s twin. Infatuated, Scott pursues her, thinking little of where the attraction might lead. What begins as an amorous dalliance gradually transforms into something much deeper and more elemental, and Graham begins to look like the one person who can save Scott both from the world and from himself. Yet Sheilah is harboring corrosive secrets of her own.

A marvel of research and a minor miracle of imagination, West of Sunset brilliantly calls to life both the seduction and the soullessness of late 1930s Hollywood while it also brings the reader inside the mind of F. Scott Fitzgerald. With deft precision, Stewart O’Nan evokes a great, flawed man in all of his complexity: his wit, his courage, and his besetting weaknesses. In its beautifully elegiac descriptions and its crisp, crackling dialogue, West of Sunset recalls a shimmering moment in time—and makes it timeless.

Stewart O’Nan grew up in Pittsburgh, Pennsylvania. A graduate of Boston University, he began his professional life as a test engineer for Grumman Aerospace before leaving the corporate world to earn an MFA at Cornell. In 1996, Granta named him one of America’s Best Young Novelists. His novels, including The Odds; Emily, Alone;and Last Night at the Lobster have won wide critical acclaim. Mr. O’Nan lives in Pittsburgh with his family.

A CONVERSATION WITH STEWART O’NAN

What drew you to tell the story of the last years of F. Scott Fitzgerald?

I’d read biographers’ versions of Fitzgerald’s time in Hollywood, but they all seemed skimpy for such a rich era; simplistic, bloodless overviews. Sheilah Graham’s memoirs vary wildly, as do the views of Fitzgerald in other contemporary accounts (Lillian Hellman’s is utterly fictitious, for instance). So, having his and Zelda’s and Scottie’s letters, knowing at least a piece of his emotional world, I decided to try to inhabit it.

Why write a novel instead of a strictly factual biography?

I didn’t have enough facts to write a biography of just that moment, and I was more interested in using the novelist’s tool of point of view to delve into his character. How does it feel to be you? For me, the novel answers this question better and more deeply than any other genre.

What is the most unbelievable thing in your novel that actually happened?

Fitzgerald pulling all-nighters with the pill-popping David O. Selznick, working on the script of Gone with the Wind. Also, that script’s original writer, Sidney Howard, being run over and killed by his own tractor.

Conversely, what detail of your invention in West of Sunset do you look upon with the most satisfaction?

Not invention but re-creation: the private moments between him and Zelda.

Ernest Hemingway accused Fitzgerald of betraying his gift. Do you agree?

No. Of course we wish we had more novels from him, but many of the stories are fine, and without his collapse, we wouldn’t have his brilliant confessional essays, “The Crack-Up” or “My Lost City.” And Hemingway’s got a lot of nerve saying that. Tender Is the Night is a far better novel than either To Have and Have Not or For Whom the Bell Tolls.

We tend to associate Fitzgerald with the glamor of Gatsby and the high life of Lost Generation of Paris. But in West of Sunset, that’s not your Fitzgerald. Who is he?

The high life is mostly over for him at this point. Since ’29, Zelda’s been in and out of asylums, and now Scottie’s away at boarding school. So he’s lonely and broke and his life isn’t stable, which makes it harder to write (which is hard enough to begin with). He’s a man who doubts his powers, a romantic who’s lost his optimism.

The book’s dialogue, especially the passages that include Dorothy Parker, generate marvelous pop and sizzle. How did you develop your ear for Algonquin-style repartee?

Dottie and her husband Alan are so deliciously catty. It was great to work with characters who’ll say anything for effect. I went back to the movies of the ’30s and ’40s like The Thin Man series, also a series of husband-and-wife detectives starring the young Rosalind Russell. So clever and sharp.

We tend to think of alcoholics as weak people. However, West of Sunset makes us acutely aware of his inner strength and determination. How did you go about developing this paradox?

Being a functioning junkie of any kind is a hustle. It takes an incredible amount of energy and guile to support and hide a habit. Writing’s the same way. It takes a ton of determination to get to the desk and stay there, especially when things aren’t going well, and things have been going wrong for Fitzgerald for a long time when he arrives in Hollywood.

With its romantic overtones and elegiac undertones, West of Sunset reads a bit like a Fitzgerald novel. As you were writing it, did you find yourself hearing Fitzgerald’s voice? Were you working more with or against whatever inspiration Fitzgerald’s work gave you?

Fitzgerald’s view of the world, his emotional sensibility, was more important for me than his voice. Trying to mimic his style is a trap. The idea was to get close to him so the reader can understand how he’s feeling. Taking on his style would be distracting when what I’m trying for is clarity and depth.

You observe that what a writer most wants from this world is “the makings of another truer to his heart” (pg. 53). Does that statement describe your own personal longing?

I think it’s true of all writers (and readers). We build these deeply felt imaginary worlds we want to live in—at least for a time.

Was there a particular character in West of Sunset that was most challenging to bring to life? If so, how did you finally crack the puzzle?

All of them. I had tons of material for my historical characters, but bringing any character to life on the page is hard. But—and this is typical—the more time I spent with them, the more alive they seemed, and after a while they were as solid and complicated as real people to me, maybe more so. That’s the trick of fiction—spending so much time with them that you feel you know them better than you know anyone in real life.

People argue over the true meaning of a Fitzgerald line that you use as an epigraph: “There are no second acts in American lives.” What do those words mean to you, and do you think they ring true?

He wrote them about Monroe Stahr, the hero of The Last Tycoon, whose wife is dead and who feels he’s lost his taste for life, but then falls in love with a beautiful and mysterious young Englishwoman—just as Scott falls for Sheilah Graham. So with the events of the book he’s testing that line. Is it true, or is Stahr’s new love a second chance? Because Fitzgerald cares for Stahr, so do we, so we hope the line’s not true. Who doesn’t need a second chance?

Both on screen and in fiction, Los Angeles can come across as a uniquely terrifying city. Why might this be so?

The scale of it, I think. The mountains and the sea and the desert all make humans seem puny and vulnerable. In ’37, the population hasn’t boomed yet, and the freeways haven’t taken over, but it’s still a strange place—the glamour of Hollywood against the motor courts filled with Dust Bowl refugees from Oklahoma.

You write that, in Hollywood, no one is who he or she claims to be (pg. 122). Is it especially challenging to write fiction about characters who are perpetually making fictions of themselves?

A character in a false position, as Chekhov puts it, is a good character to write about. Eventually the truth will out, so there’s all this built-in potential. Plus, the self-dramatizing are never dull. Annoying, maybe, but never dull.

Scott tries and fails to make it as a screenwriter. Would you ever write for the screen? Why or why not?

I haven’t, but I’ve written a number of screenplays, mostly adaptations of novels I love, like Denis Johnson’s Angels, and Flannery O’Connor’s The Violent Bear It Away. It’s another way of inhabiting the books, of getting close to the characters, working with the scenes and dialogue.

The Poet of Tolstoy Park
Back to Top