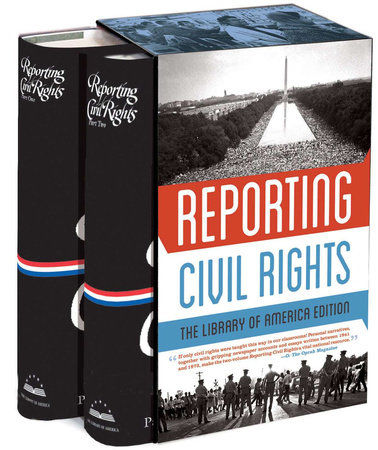 About Reporting Civil Rights: The Library of America Edition

This landmark two-volume anthology chronicles more than thirty tumultuous years in the African American struggle for freedom and equal rights. Here, in brilliant and inspiring dispatches from some of the finest reporters in the history of American journalism, is a panoramic portrait of the fight to overthrow segregation in the United States. Nearly 200 newspaper and magazine reports, book excerpts, and features by 151 writers—David Halberstam, Carl Rowan, Robert Penn Warren, Gordon Parks, Ralph Ellison, and Anne Moody among them—provide vivid firsthand accounts of all the revolutionary events: the rising activism of the 1940s; the Brown decision; the Montgomery bus boycott; Little Rock; the sit-in movement and Freedom Rides; Birmingham, the March on Washington (August 28, 1963), Freedom Summer, and Selma; and the emergence of “Black Power.”

Each volume contains a detailed chronology of the civil rights movement, biographical profiles of the journalists, notes, an index, and thirty-two pages of photographs, many never before published.

“If only civil rights were taught this way in our classrooms! . . . Reporting Civil Rights [is] a vital national resource” —O: The Oprah Magazine

Clayborne Carson is professor of history at Stanford University and director of the Martin Luther King, Jr., Research and Education Institute.