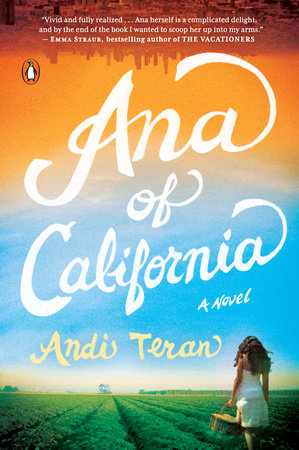 Ana Cortez is back at Los Angeles County Child Support Services. Her caseworker, Lupe Salcedo, is fond of the girl but warns, “this is the fifth home you’ve been expelled from in the last ten years” (p. 1). Now, the fifteen-year-old orphan’s options are either a group home or a work internship program on a farm in Northern California.

Ana’s been sent to a group home before and vividly remembers her stay. The other girls were “older and greater in number, swift and quiet in their attack” (p. 10). Even though it means getting on a plane and leaving behind the only life she’s ever known, Ana decides to take her chances on the farm. If it doesn’t work out, she can file for emancipation when she turns sixteen in a few months.

Emmett Garber arrives at the airport expecting to meet a teenage boy. He and his sister Abbie have been short-handed of late, but it was Abbie who made all the arrangements. Knowing Emmett is completely opposed to hosting a foster kid, Abbie deliberately neglects to tell him that the only available candidate was a girl. When he realizes that Ana is the “Cortez” he’s supposed to pick up, Emmett reluctantly takes her home, determined to send her back the next day.

Unlike Emmett, Abbie is delighted with Ana. She read the girl’s case file and knows there are some red flags, but life on the farm has been lonely since Emmett’s wife, Josie, left a year earlier. Abbie convinces Emmett to give Ana a chance, promising that the girl will be out to work in the fields by 5am every day.

Her first week on the farm is a whirlwind of activity. Raised on processed foods, Ana can’t always tell the difference between the vegetables and the weeds. Fortunately, Manny Lavaca, the farm manager, shows her the ropes. Like Ana, Manny is Mexican American, and his kindness eases her sense of being an outsider in the predominantly white community.

Ana is “aware of all of the orphan clichés” (p. 59) and works hard to earn her keep. Despite her best efforts, however, she butts heads with two local residents: Minerva Shaw, a prim bed-and-breakfast owner, and Cole Brannan, the most popular boy at her new school. She also makes her first real friend. The daughter of Abbie’s closest friends, Rye Moon is the same age as Ana, and the two quickly become inseparable.
As Ana settles into her new routine, she feels secure and happy for the first time since her abuela died. She also begins to understand that Emmett and Abbie have troubled pasts of their own. But when a moment of bad judgment threatens Ana’s position on the farm, she discovers that friendship, life, and especially love can be complicated—wherever you call home.

In her sparkling debut novel, Andi Teran transports L. M. Montgomery’s classic orphan tale, Anne of Green Gables, to twenty-first-century California. Heartfelt and boldly reimagined, Ana of California is a delight for readers of all ages.

1. Lupe Saucedo knows that Ana’s last foster situation was far from ideal, but she’s unable to place her with another family. Should Lupe have taken Ana in herself? Does Lupe have Ana’s best interests at heart?

2. On the ride home from the airport, Emmett warms to Ana after learning that she likes Neil Young. Later, Ana and Rye bond over their shared love of the band Hex. Music can be a powerful force that brings strangers together. Why might this be?

3. Why is Abbie so nervous when Ana arrives at the farm? Should Abbie have told Ana about Josie and why she left in order to prevent future misunderstandings?

4. What does Miranda’s mistake about “Mexican Coke” say about her? Do Miranda’s later actions redeem her initial treatment of Ana?

5. Ana’s parents were gang members who were involved in illegal activities and eventually murdered by a rival gang. Even though Ana was just a young child, she fears that prison—or worse—is her “destiny.” How do kids like Ana come to believe that they are criminals without even committing a crime?

6. Once the school year starts, Ana, Rye, and Brady are harassed by some of the popular kids and eat lunch together at “the official weirdo table” (p. 196). How well does the author capture the realities of being a teenager?

7. When Vic, Rolo, and Rene are tempted to leave the Garbers and begin working at the Keyserville farm for higher pay, it’s Ana who convinces them to stay. Besides helping Emmett pay their full wages, how does Ana persuade them to change their minds?

8. Why does Abbie find it so difficult to believe that Will is interested in her romantically? Would their ages make any difference if Will were the older of the two?

10. Besides Ana, who is your favorite character? What is it about him or her that appeals to you?

11. Spoiler Warning: If you haven’t finished the book, proceed with caution.

Would Cole’s mother have objected to Ana’s relationship with Cole if she hadn’t been living with the Garbers?

12. After Rye told Cole she was gay, he outed her to their classmates. How might he have handled this situation differently?

13. Rye tells her parents that it was Ana’s idea to take psychedelic mushrooms even though her lie may cause the Garbers to send Ana back to Los Angeles. Does Rye fully understand what returning to L.A. might mean for her friend? Should Ana have tried to prevent Rye from taking them?

14. If you were Ana, would you forgive Rye for jeopardizing your situation with the Garbers?

Andi Teran is from El Paso, Texas. She has written about fashion, film, and culture for Vanity Fair, Monocle, New York Magazine, and MTV. She currently resides in Los Angeles. Ana of California is her first novel.
Learn More About Ana of California
print

Riding With the Queen

The Nobel Lecture in Literature, 2003

Down and Out in Bugtussle
Back to Top