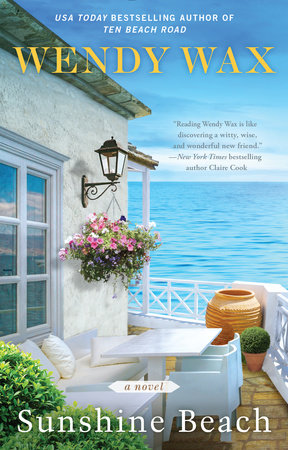 1. In order to renovate the Sunshine Hotel and Beach Club, Madeline, Avery, Nicole, and Kyra must help solve the mystery of what happened to Renée and Annelise’s parents. What else do the characters learn as they renovate the club? Does each woman have to make peace with a certain part of her own past to move forward with changing her life?

2. Renée and Annelise suffered a brutal loss when they were children and have dealt with that loss very differently. Renée feels the Sunshine Hotel and  Beach Club, the place where the loss occurred, should be torn down while Annelise doesn’t want it touched. How do these different approaches to the hotel reflect how each sister has dealt with her loss? Do you think that’s a result of their ages at the time of the incident, their personalities, or both? How does solving the mystery of their parents’ deaths help the two sisters? How do they each change as a result of what is discovered? How does that change their view of the hotel?

3. Avery has to come to terms with the unexpected death of her mother, Deirdre Morgan. Do you think that is made more complicated, since she had just reconciled with her mother? Do you think Avery regrets not allowing her mother back into her life sooner?

4. When Steve Singer comes to stay at Bella Flora it changes his relationship with his ex-wife, Madeline, and his daughter Kyra. How does each relationship change? How do Kyra’s feelings toward her father change the longer he lives in the house? What does she learn about him?

5. Maddie chooses to let Kyra reach her own conclusions about Steve. Why do you think Maddie handles it this way? Do you think it was the right strategy? How does Steve change through the book? Do you think he learns any lessons? How does Maddie and Steve’s relationship transition throughout the book? What do they each learn about each other? As Kyra’s view of Steve as a father changes, does it influence how Kyra feels about Daniel Deranian’s parenting skills?

6. Do you think Kyra is still in love with Daniel? When she lets Dustin stay with his father on the movie set do you think she has any sympathy for Tonja? Why or why not?

7. At the end of the book Kyra takes a loan against Bella Flora to raise the money the women need to renovate the hotel and fight the network lawsuit. Her father and John Franklin are very concerned about the risk involved. Do you think Kyra is making a wise decision? Do you understand why she is willing to risk Bella Flora? Do you think she should have told Maddie, Nikki, and Avery the truth about where she got the money? Do you understand why she didn’t, and why she didn’t want to take a loan from Daniel? Have you ever taken a similar risk?

8. Nicole is struggling with how to tell Joe Giraldi that she is pregnant with his baby. Have you ever found yourself scared to reveal a secret that affected another person so closely? Do you agree with how Nicole handled the situation? Why do you think it was so hard for her to tell Joe? Why is Nicole so scared to trust Joe’s love? Why is she reluctant to marry him? Do you think her feelings have changed by the end of the book?

9. Why do you think Nicole feels obligated to visit her brother Malcom Dyer in prison, after all he has put her through and after all the lies he’s told her? Why do you think she wants to believe in him and to trust him? In contrast, why is it so hard for her to trust Joe?

10. Daniel Deranian and William Hightower have both been celebrities for a long time and they both encourage Maddie, Nicole, Avery, and Kyra to keep the paparazzi like Nigel Bracken interested and reporting on the women’s activities at Bella Flora. They feel that relationship will help the women to promote and protect their television show, Do Over, and that it’s a mutually beneficial relationship. Do you think that’s true? What do you think about reality television stars who are famous simply because they’re willing to have their lives filmed? What role do the paparazzi play in their celebrity status?

11. Madeline feels like she’ll never be able to compete with the young, gorgeous rock-star groupies who hang on William Hightower. Do you think her fears are reasonable? Do you think women are under an enormous amount of pressure to appear young, thin, and beautiful no matter their age? Why do you think William values his relationship with Maddie? Could you relate to Maddie’s insecurities?

12. Maddie and Kyra are navigating complicated relationships with high-profile stars. Maddie is romantically involved with the rock star William Hightower, and Kyra’s son Dustin was fathered by Daniel Deranian, a major movie star. What difficulties are presented for each woman because she’s involved with a famous man? How are their challenges similar and different?

13. At the end of each day, Maddie asks everyone to share one good thing to toast at sunset. Why do you think Maddie feels that tradition is so important? Does it help each character? Does it help some of the women more than the others? Do you have a similar daily ritual?

14. Avery, Kyra, Maddie, and Nikki each faced different challenges in the novel. Which woman’s story resonated the most with you? Why? What do you think each woman learns throughout the course of the book? What causes the breakthrough for each of them?
Learn More About Sunshine Beach
print

A Week at the Lake

The Mystery of Mercy Close

The Color of Light

A Long Time Gone
Back to Top