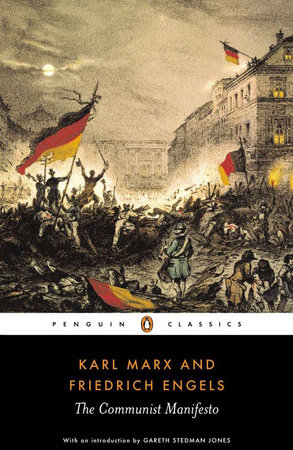 For much of the twentieth century, The Communist Manifesto was accepted as doctrine by those living under Communist rule as well as by those caught up in the fervor of revolutionary political activity, while others considered it a piece of propaganda of interest mainly to scholars of political history and international relations. But the Manifesto is really an extended set of provocative answers to questions about Communism, which emerged in the 1840s as a new vision of history and the nature of humans as historical beings, determined in all aspects by the material conditions of society. And as a work that places so much importance on the connection between ideas and artifacts and their historical moment, it has its own history.

In June 1848, less than six months after the Manifesto‘s first publication, Marx advocated shelving the document and disbanding the Communist League, which had requested in late 1847 that Marx and Engels write the Manifesto. After the widespread and unsuccessful revolutionary activity across Europe earlier in the year, it was already clear to Marx that the immediacy of the program outlined in the Manifesto could not well serve the political and social conditions of the times. Over the next twenty years, the Manifesto was largely disregarded. In the 1870s, with Marx prominent in the international socialist movement, the Manifesto came to be honored more as a document of symbolic historic significance than as a viable plan of action. By then, the vehement call to revolution in the Manifesto had been superseded by the move to accommodate different class interests within and through existing political structures, best exemplified by the flourishing of labor unions and reform legislation.

The Manifesto did not achieve canonical status as the essential informing document of the world Communist revolution until the Bolshevik Revolution of 1917 in Russia and the rise of Lenin. Treated for decades as a piece of writing imbedded in an era long past, the Manifesto came to be regarded as a perennial outline of political direction. Like sacred scripture, it engendered a body of orthodox interpretation, carefully constructed to fit to the changing world scene what were considered its universal propositions.

But what of the intrinsic qualities of the Manifesto? What assures that it will be read and discussed regardless of political circumstances? In part 2, Marx and Engels assert, “The theoretical conclusions of the Communists are in no way based on ideas or principles that have been invented, or discovered, by this or that would-be universal reformer. They merely express, in general terms, actual relations springing from an existing class struggle, from a historical movement going on under our very eyes” (p. 234-235). Marx and Engels, it would seem, intended the Manifesto not only to make clear to the world the political positions and views of Communists, in order to dispel the specter of misconception, but to also describe the causes and directions of historical change as manifested through the clear-eyed view of Communists.

In brief form, the Manifesto presents nothing less than a unified theory of historical dynamics, with class struggle as the central motive and all manifestations of politics and culture, including art and literature, derived from the prevailing system of material production. This gives way to an almost exuberant characterization of capitalist productive achievement that still holds our attention as a completely recognizable portrait of the relentless drive of modern industry and trade. Set against capitalism’s wonders is the human cost of being subject to a system that drains personal incentive, wears out the body and mind, and results in profound alienation from the value of one’s productive activities. The plight of the proletariat forces us to consider the harrowing condition of humanity stripped of all comforting illusions: “…man is at last compelled to face with sober senses, his real conditions of life, and his relations with his kind” (p. 223).

But Marx and Engels ultimately are concerned with the advent of a world in which the conditions of life will be uniformly benign and in which human relations will be in some way improved. What would be the moral basis of such a world? Marx and Engels claim that “Communism abolishes eternal truths, it abolishes all religion, and all morality, instead of constituting them on a new basis” (p. 242). In the end, readers of the Manifesto must confront a paradox that arises whenever we conceive of the individual as largely determined by circumstances. For the Manifesto is both a prediction of an inevitable course of history and a rallying cry to act in a certain way for the purpose of bringing about change and improvement. How to act autonomously in a world determined by forces more powerful than the individual is a timeless question.

ABOUT KARL MARX AND FRIEDRICH ENGELS

Karl Marx was born in 1818 to a professional family in Prussia with liberal political leanings, which, at that time, were likely to attract police surveillance. After a vigorous academic career at the University of Berlin, where he was influenced by the historical doctrines of the philosopher Hegel, Marx became editor of a radical newspaper in Cologne, which was soon suppressed. He then left with his new wife for Paris, where he began to meet with Communist organizations of French and German workers and formulate his socialist views.

Friedrich Engels, born in 1820, came from a family of affluent industrialists and quickly developed a capacity for leading a double life. While successfully tending to family business interests as manager of and partner in textile factories in Germany, and later in Manchester, England, he pursued his involvement in revolutionary politics through writing and meeting with radical workers’ groups. In 1844, he published his classic study of the social ravages of industrialized society, The Condition of the Working Class in England.

Marx and Engels began their lifelong partnership to establish what has become known as Marxist Communism during a ten-day visit in Paris in 1844. Marx once remarked that their enemies used the singular verb when speaking of “Marx-Engels.” However, though joined by their mutual commitment to the cause of revolutionary socialism, they were very different in temperament and background. Engels was brisk and lighthearted, with all the social refinements of a bourgeois gentleman, while Marx was the stereotype of the ponderous scholar—slow, careful, and somber. Though he lived in London for thirty-four years, Marx never learned to speak English fluently; Engels was fluent in more than a dozen languages.

In 1847, Engels helped organize the Communist League in London; the following year, he and Marx drafted a statement of principles for this group, Manifesto of the Communist Party. By this time, Marx had moved to Brussels after a series of expulsions from France and Germany. After the unsuccessful European revolutions of 1848, which occurred immediately after the publication of the Manifesto, Marx returned to Germany to edit a newspaper. When this failed, he settled permanently in London in 1849. Earning very little from his writing and dependent on the generosity of Engels, Marx pursued his studies in economic and social history in the library at the British Museum. During fourteen years of isolation from politics, he began to write a series of books on economic theory. The culmination of these writings was his greatest work, Capital, for which Engels provided essential information about business practices and industrial operations.

With the founding of the International Working Men’s Association in 1864, Marx emerged from obscurity to be a leading spirit in the movement to unite workers across political boundaries, one of the goals professed sixteen years earlier in theManifesto. After the Paris Commune was crushed in 1870, Marx became an internationally known figure, declaring, “Its martyrs are enshrined forever in the great heart of the working class.” After Marx’s death in 1883, Engels used his considerable social and writing skills and persuasive abilities to popularize their mutual views. Until his death in 1895, he was generally regarded as the foremost authority on the body of economic and social theory known as Marxism.

Charles Dickens, A Christmas Carol (1843) and Hard Times (1854)
The popular Christmas story can be read in light of what is referred to in the Manifesto as “conservative, or bourgeois, socialism”—the attempt to ameliorate the misery of the working class through charitable works. Published soon after theManifesto, Hard Times portrays the conditions in mid-nineteenth-century industrial England that provoked Marx and Engels’s critique of capitalism.

V. I. Lenin, The State and Revolution (1917)
The chief architect of the Russian Revolution draws on the work of Marx and Engels to substantiate the imminent seizing of power and establishing of a proletarian dictatorship.

Karl Marx, Capital (1867)
This work elucidates the revolutionary implications of the capitalist system of production and argues that its demise is an inevitable consequence of its own development.

Karl Popper, The Open Society and Its Enemies (1945)
This signal work of social philosophy includes a searching critique of Marx’s theory of historical inevitability, arguing that it contains principles antithetical to the values of modern, liberal democracies.

Jean-Jacques Rousseau, Discourse on the Origin of Inequality (1755)
This essay speculates that the establishment of private property underlies civil society and is the root cause of all social inequalities and class differences. Rousseau’s sentiments fed the fervor of revolutionaries and socialists, including Marx and Engels, for a century.

Upton Sinclair, The Jungle (1906)
In graphic detail, this novel of social realism depicts the brutalizing effects of industrial production on the lives of workers in the Chicago stockyards. Like the Manifesto, it conveys the impressive efficiency of capitalism while deploring its human cost.

The Conquest of Bread

On the Shortness of Life

The Communist Manifesto
Back to Top