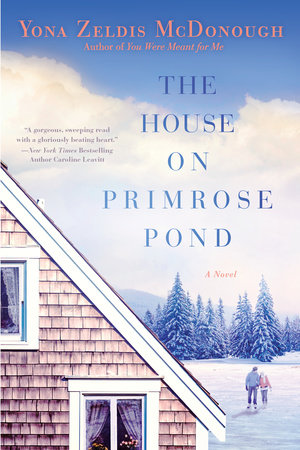 A Conversation With Yona Zeldis McDonough

Q. Your past novels have been set in or near New York City; why did you make the leap to New Hampshire?

A.  New York was always my default setting.  With the exception of four years in college and a year abroad, I’ve lived in New York pretty much my whole life. So it was easy to set my books there, especially around Park Slope, Brooklyn, where I have lived since 1992.  But lately I began to feel restless in the ‘hood and sought to move beyond it.  The question was: where?  A writer needs to have sufficient familiarity with a place to make it come alive on the page.  And that takes more than Google research.  So I gravitated to New Hampshire, my husband’s home state.  We have spent many happy summers there in a cottage on a lake, which inspired the setting of The House on Primrose Pond.  I love the spot dearly, and felt I could write about it with the necessary authenticity and passion.

Q.  How did you come to write about Ruth Blay?

A.  The characters of Susannah and Alice came to me quickly, as did as their respective back-stories.  Yet I had an urge to make the story bigger than that.  I looked to New Hampshire history (this is where Google is very effective!) for inspiration. I was thinking of something on a grand scale—a fire or a flood.  Instead I stumbled on Ruth Blay and once I did, I was hooked. The story felt to me so shocking, yet in another way, so familiar.  The man who got Blay pregnant was never even named, yet she went to her death for her “crime.”  Chilling.  But not surprising.

Q. How closely did you stick to the facts when writing her story?

A.  I tried to keep to the facts of Blay’s life as best I could, though not a lot is known about her.  I was able to see and examine actual documents pertaining to the trial housed in the state archives in Concord, NH, and I visited the cemetery in Portsmouth where she was hanged.  I also saw the tattered remains of a garment that is thought to have been hers.

Q. What about Betsey Pettingill?

A.  Even less is known about Betsey Pettingill’s life, which gave me more room to invent and imagine it.  I chose to make Betsey the narrator of the novel-within-the-novel, which meant I had to conjure what she might have thought and felt, as well as create fictional events to round out her very long life. I do know that she expressed remorse for her role, however inadvertent, in Blay’s death, and I used that information to shape her character.

Q. Can you talk about the poetry in the novel?  Was that a challenge to write?

A. I hold with Wallace Stevens who said, “Poetry is the supreme fiction.” How I wish I could really write it!  But since the poet in the novel is an amateur, I felt liberated from having to write verse that had real merit on its own. Instead, the poems I wrote formed a little synopsis of the romance he and Claire Gilmore had. The first poem is a kind a seduction, a plea.  The second is an exultation and celebration. The final one is a lament.   Even though I felt I was far outside my comfort zone, I really did enjoy writing the poems.

Q. The novel contains several letters, e-mails, texts, etc.  Why did you choose to include those things?

A. This is a quest novel, and as such, it includes many clues.  These clues were often in a written format, like the poems that Susannah finds, and the unsigned love note intended for her mother.  I wanted to include these things to add to the texture of the novel, and to layer it with that kind of quotidian yet essential detail. Our lives are filled with these bits and pieces, and I felt they would have a place in the story.

Q. Apart from two chapters, the novel is told from Susannah’s point of view; why did you make those exceptions?

A. I knew that this was Susannah’s story from early on.  But Alice has a pivotal role, and often her behavior can seem puzzling, inappropriate or even bizarre. I felt I needed a couple of chapters from her point of view so that her particular history could be explored and understood.  Even though she makes some inadvisable choices, those choices are in part determined by her disappointments, longings and regrets. I wanted the reader to know her better, and judge her less.

Q.  You have not written anything historical before. Is this a new direction you’ll be following in the future?

A.  I found this foray into the 18th and 19th centuries kind of thrilling, and yes, I am eager to try my hand at historical fiction again. I am working on a novel set in 1947 now, and I have an idea for a novel set in New Orleans, around 1917. I’m eager to dig in!

1. Susannah feels she is indirectly responsible for her husband’s death; do you agree or disagree?

2. What do you think drives Susannah’s burning need to find out about her mother’s secret life? What would you do in her situation?

3. Do you feel Alice’s behavior toward Calista is justifiable, or is she seriously overstepping?

4. Susannah might easily have kept to herself what she found out about Dr. Dave. Do you think she is right or wrong to share it with Alice?

5. In what ways do you identify with Calista’s need to separate herself from her mother, or with Susannah’s pain at the separation?

6. What is the connection between Susannah’s story and Betsey’s?

7.  After some pretty bad behavior, Susannah gives Corbin another chance; what would you have done?

8.  Do you imagine it’s likely they will stay together? Why or why not?
Learn More About The House on Primrose Pond
print

Twelve Rooms with a View

Nice to Come Home To

A Pinch of Ooh La La
Back to Top