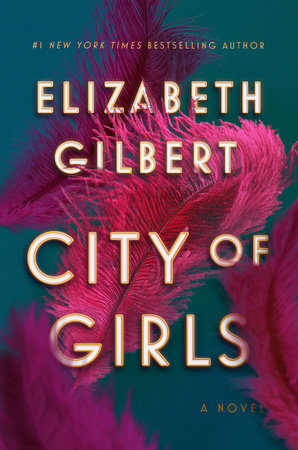 1. Narrative: Elizabeth Gilbert chooses to tell Vivian’s story in the form of a letter to a younger woman, Angela. How do you think the story benefits from being told in the voice of 89-year-old Vivian, looking back? What did you learn from this vantage? How did it influence your reading experience?

2. Character perspective: In 1940, nineteen-year-old Vivian’s introduction to life in New York City and within the Lily Playhouse is a shock after her world at Vassar and her family outside of the city. What is so different about it all? What elements of this new city and world shape her the most, do you think? And how might they have struck her differently if she’d come from a different kind of family and class background?

3. Sexuality: Vivian receives an atypical sexual education from her new friends, the showgirls, and from her time with Anthony. How does her time at the Lily shape Vivian’s ideas about sex and love and desire and appetite as a young woman, and how do these ideas sustain and evolve later in her life? How much do you think her adult ideas about female desire are due to her personality or experience? How typical do you think Vivian’s attitudes about sex and love would have been for someone of her age and time?

4. Female friendship, part 1: Consider the portrayal of Vivian’s friendship with Celia Ray, the smoldering showgirl at the Lily Playhouse. How does it compare to her previous experiences of female friendship from school. How much does this friendship influence what happens next for Vivian? Which of these two women, Vivian or Celia, do you think holds the power in their friendship, and why? How do you imagine their friendship would have played out over the years if certain events had not intervened?

5. Female friendship, part 2: How does Vivian’s later friendship with Marjorie compare with her younger friendship with Celia Ray? Would Vivian’s life with Marjorie and her other friends later in life have been possible if not for knowing Celia and the other women at the Lily when she was younger? Do you see her applying any lessons learned by observing the relationship between Peg and Olive and Uncle Billy?

6. Men: Consider the different male characters in the book – Vivian’s father, Walter, Uncle Billy, Mr. Herbert, Arthur, Anthony, Jim, Frank – and their different ideas expectations of women. What accounts for the differences between these men and how they relate to women? In what ways does Vivian meet their expectations or challenge / change them?

7. Fashion: City of Girls is full of descriptions of fantastic costumes and characters with truly original senses of style. What does Vivian learn about fashion and style from the showgirls? From her grandmother? From Edna? Even from Peg and Olive? Consider the role that fashion plays in Vivian’s story and in the various relationships and stages of her life: in boarding school, at the Lily Playhouse, at the Navy Yards, at L’Atelier with Marjorie, and in meeting Angela.

8. Generations: Edna, Olive, and Peg represent an older generation of women. Their views and relationships (with Billy, with Arthur) and behaviors influence Vivian in different ways. Consider what Vivian learns from Peg, Olive, and Billy’s domestic / professional arrangement. What about the dynamics she observes between Edna and Arthur? Think about how Edna treats Vivian after Vivian’s betrayal is revealed. Do you think Edna is justified in her behavior? Ultimately Edna decides to stay with Arthur even after what he has done. Do you think Vivian would have stayed with Arthur if she were in Edna’s position? Would Arthur have stayed with Edna if the positions were reversed?

9. Family: Were you surprised by the kind of life that Vivian builds with Marjorie and Nathan? In what ways can you see it growing out of her experiences at the Lily Playhouse in her twenties, and the lifestyle and values she adopts during and after the war? How does Vivian’s adult family life compare to the family she grew up with? Do you think Vivian ever wants more than the life she attains?

10. Love: What kind of love does Vivian have for Frank, and how does this love change the course of her life? How does Vivian’s love for Frank differ from her youthful love of Anthony? How does it compare with any of her other friendships or romantic relationships? How do you think Vivian would describe the difference between a “love” and a “lover”? Can you imagine Frank and Vivian having a physical relationship? How might that have changed Vivian’s life and story?