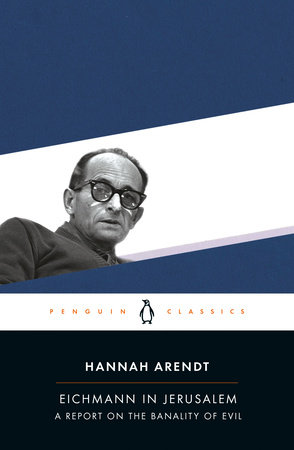 Even before its publication as a book, Hannah Arendt’s Eichmann in Jerusalem: A Report on the Banality of Evil (which originally appeared as a series of articles in The New Yorker) generated much controversy. Critics attributed her coverage of the Adolf Eichmann trial to a host of purposes other than simple reporting, such as exposing the role of the Jewish leadership in the Holocaust and raising larger questions about German guilt and the nature of totalitarianism. Arendt was prompted to clarify her intentions in a postscript to the book, claiming in its final sentence, “The present report deals with nothing but the extent to which the court in Jerusalem succeeded in fulfilling the demands of justice” (p. 298). Evaluating the court’s success, however, proves to be a more complex endeavor than this statement implies. Adolf Eichmann, the Nazi lieutenant colonel responsible for transporting countless Jews to concentration camps and, in most cases, to their deaths, escaped Germany after World War II and made his way to Argentina, where he lived under a false name until 1960. That year, intelligence operatives from the young nation of Israel kidnapped Eichmann and brought him to Jerusalem to face charges of crimes against the Jewish people, crimes against humanity, and membership in three of the four organizations that the Nuremberg Trials had classified as “criminal.” The facts of Eichmann’s case had been established before the trial and were never in dispute. However, genocide was a new kind of crime; that the Israeli court did not recognize it as such is, in Arendt’s view, “at the root of all the failures and shortcomings” of the trial (p. 267). Arendt writes, “Justice demands that the accused be prosecuted, defended, and judged, and that all the other questions of seemingly greater import…be left in abeyance” (p. 5). Much of Arendt’s book illustrates that the larger issues were not set aside during the Eichmann trial, showing how the case “was built on what the Jews had suffered, not on what Eichmann had done” (p. 6).

Eichmann told the court that he saw himself as a friend of the Jews, helping them leave a culture for which they were unsuited and move on to better lives elsewhere. He considered himself an ally of Zionists, whom he thought shared his “idealism.” Arendt believes him—at least, she believes that this was how he saw himself. “Despite all the efforts of the prosecution,” Arendt writes, “everybody could see that this man was not a ‘monster,’ but it was difficult indeed not to suspect that he was a clown” (p. 54). The transcript of Eichmann’s examination by Israeli police while awaiting trial prompts her to observe that “the horrible can be not only ludicrous but outright funny” (p. 48). She dwells on his shallow intellect, his clichéd speech (which she interprets as a means of consoling himself), his infinite capacity for self-deception, and his profound detachment from reality.

Arendt portrays Eichmann as a “joiner,” a conformist, describing him as “a leaf in the whirlwind of time” (p. 32). It is this aspect of his character, according to her, rather than any deeply held convictions shared with the Nazi Party or a rabid hatred of Jews, that accounts for his actions during the war. Apart from determining Eichmann’s motivation is the question that, as Arendt observes, must be asked of any criminal defendant: was he aware that his actions were in fact criminal? The prosecution had to assume that he was, as “all ‘normal persons'” would be (p. 26). But Arendt asserts that, “under the conditions of the Third Reich only ‘exceptions’ could be expected to react ‘normally'” (pp. 26–27). With considerable insight and detail, Arendt explains how Germany’s leaders went about creating these conditions, to the point that “conscience as such had apparently got lost in Germany.” There were individuals who resisted, she notes, but “their voices were never heard” (p. 103).

In Arendt’s view, the real circumstances of Eichmann’s actions never came fully to light during the trial. This is why, in part, the trial obscures what for Arendt is “the lesson that this long course in human wickedness had taught us—the lesson of the fearsome, word-and-thought-defying banality of evil” (p. 252). Eichmann claimed that as his job shifted from forcing Jews from their homes to arranging for them to be killed, he was troubled by the new policy but felt duty-bound to obey his superiors. In fact, he said that not following orders was the only thing that would have given him a bad conscience. As far as Arendt can determine, only once did Eichmann act in a way that could perhaps be construed as resistance, when he decided to send a transport of Jews and Gypsies to the ghetto of Lódz instead of to Russian territory, where they would have been immediately shot. But, Arendt writes, “his conscience functioned in the expected way only for about four weeks.” (p. 95) Arendt does not address directly the question of what Eichmann might have done had his conscience continued functioning “normally.” Yet in documenting the results of Nazi efforts to rid other countries of Jews, she concludes that “under conditions of terror most people will comply but some people will not, just as the lesson of the countries to which the Final Solution was proposed is that ‘it could happen’ in most places but it did not happen everywhere. Humanly speaking, no more is required, and no more can be reasonably asked, for this planet to remain a place fit for human habitation” (p. 233). We could take this as evidence that the only hope of preventing future catastrophes must lie in a morality that is inherent in human nature. On the other hand, Arendt considers Eichmann “terribly and terrifyingly normal” (p. 276). Eichmann in Jerusalem leaves us wondering not only if justice was achieved in Eichmann’s case, but also whether the lessons Arendt believes the trial has taught will make a difference in the future.

Born in 1906 in Hanover, Germany, eminent political philosopher Hannah Arendt grew up in Königsberg (once part of East Prussia and later renamed Kaliningrad as part of the Soviet Union). From an early age, Arendt proved herself a gifted student. She began her university studies in the cosmopolitan Weimar era, was deeply influenced by philosophers Martin Heidegger and Karl Jaspers, and received her Ph.D. from the University of Heidelberg in 1928.

Before the Nazis came to power, Arendt was a political activist and worked with German Zionists to publicize Nazi persecution of Jews. In 1933, she fled to Paris, where she married the philosophy professor Heinrich Blücher, and they managed to emigrate to the United States in 1941. In New York City, Arendt continued to work for Jewish causes and was chief editor at Schocken Books. Her monumental work The Origins of Totalitarianism was published in 1951, and numerous other books of political philosophy followed, including The Human Condition and the controversialEichmann in Jerusalem. Arendt taught at many universities, including Princeton, the University of Chicago, and the New School for Social Research. She died in 1975.

Jan T. Gross, Neighbors: The Destruction of the Jewish Community in Jedwabne, Poland (2001)
One day in 1941, half of the citizens in Nazi-occupied Jedwabne murdered the other half—all but seven of the town’s Jews. This controversial account of that day uses eyewitness testimony and physical evidence to reconstruct one of the hidden horrors of the Holocaust.

Reinhold Niebuhr, Moral Man and Immoral Society: A Study of Ethics and Politics (1932)
Influential theologian Reinhold Niebuhr argues that, because humans are inherently sinful, conflict between them is inevitable. While individuals can often transcend the self-interest that governs their behavior, societies cannot, making peace between them difficult to maintain.

Friedrich Nietzsche, Beyond Good and Evil: Prelude to a Philosophy of the Future (1886)
As in many of his other works, Nietzsche here offers a different perspective on the most enduring human values. Considering religious teachings an inadequate basis for morality, he outlines a way of understanding morality that is more consistent with the realities of life.

Richard Overy, Interrogations: The Nazi Elite in Allied Hands, 1945 (2001)
In the months before the Nuremberg War Crimes Tribunal in November 1945, Allied legal authorities gathered evidence from interrogations of Nazi officials. The transcripts assembled and analyzed in this history provide a previously unseen portrait of the Third Reich in defeat.

The Rise of Theodore Roosevelt

Hitler’s Willing Executioners
Back to Top