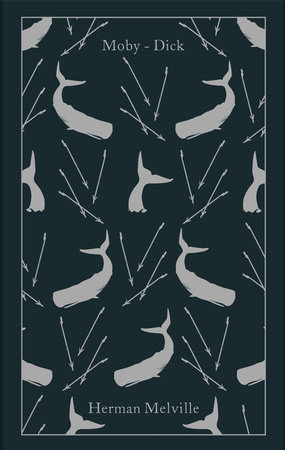 Its reputation invariably preceding it, Herman Melville’s Moby-Dick is a novel like no other. Whether readers expect a subtle work of art, a rollicking adventure story, or a ponderous, inaccessible book, they come to this novel with a sense that the experience of reading it will be memorable. The story Melville tells is powerful and tragic—a whaling ship captain, obsessed with the animal that maimed him, pursues it to the point of destroying himself and his crew, except for Ishmael, the novel’s narrator. But the plot of Moby-Dick is little more than a variation on those used by countless authors both before and after Melville. It is the way Melville tells the story that makes the novel incomparable. In fact, how a story is told and, more generally, how we interpret our experiences become as much the subject of the novel as Ahab’s hunt for the white whale. As relentlessly as Ahab chases Moby Dick, so Melville questions the nature of the interaction between the mind and the external world.

Although their dramatic roles in the novel are very different, both Ishmael and Ahab are central to Melville’s elaboration of this theme. As the novel unfolds, Ishmael’s asides, which together form an investigation into the origins of meaning, share the stage with the story of the hunt for the whale. Is meaning inherent in the world, or is it imposed? Ishmael would like to believe that the world speaks to us, however incapable we may be of understanding it—“some certain significance lurks in all things, else all things are little worth, and the round world itself but an empty cipher” (p. 470). But he cannot extinguish his doubts, and he is even less sure of his or anyone’s capacity to adequately represent the world and one’s experience of it to others. When Ishmael meditates on the connotations of whiteness in “The Whiteness of the Whale,” he is not merely probing the depths of a particular subject; he is also engaging in a philosophical exercise. Whiteness becomes one among an infinite number of things to interpret. As with other subjects into which the narrative digresses, the whale’s whiteness intrigues Ishmael because it simultaneously suggests contradictory meanings as well as the possibility of meaning nothing at all.

Ishmael concludes “The Whiteness of the Whale” by telling us that “of all these things the Albino whale was the symbol” (p. 212). But what do “these things” amount to? It would seem that, for Ishmael, whiteness represents above all his own inescapable uncertainties. How are we then to read the question that follows, ending the chapter: “Wonder ye then at the fiery hunt?” (p. 212) Does Ishmael believe that, with this analysis of whiteness and its potential meanings, he has explained the allure of Moby Dick? Is it not, after all, Ahab’s more active, antagonistic obsession with the meaning of things, rather than Ishmael’s, that is manifested in the hunt? Ishmael asserts that Ahab “piled upon the whale’s white hump the sum of all the general rage and hate felt by his whole race from Adam down” (p. 200). An important difference between Ishmael’s and Ahab’s searches for meaning is that, for Ahab, its elusiveness is not simply troubling but a source of torment; bottomless mystery is simply unacceptable. The loss of his leg can be considered merely a physical instance of the malevolence Ahab senses in the world’s inscrutability. In one of the novel’s most resonant metaphors, Ahab compares the visible world to “pasteboard masks,” beneath which lies, perhaps, an ultimate truth—“If man will strike, strike through the mask! How can the prisoner reach outside except by thrusting through the wall? To me, the white whale is that wall, shoved near to me. Sometimes I think there’s naught beyond. But ’tis enough” (p. 178). Ahab believes that knowledge of Moby Dick, only achievable through literal confrontation, would give him access to a reality beyond human comprehension. Yet he may find nothing there but a void.

Ishmael approaches the possibilities for knowledge more contemplatively. In lamenting the failure of visual artists to accurately represent the whale, Ishmael concludes that, because of its features and habitat, “there is no earthly way of finding out precisely what the whale really looks like” (p. 289). To get close enough to the whale, “you run no small risk of being eternally stove and sunk by him” (p. 289). Is Ishmael suggesting that Ahab’s desire for some kind of ultimate truth carries with it the risk of death? The novel’s conclusion seems to support this idea. Perhaps Ishmael survives because, although he is just as attuned as Ahab to the elusiveness of truth, his inability to grasp it has not turned into self-consuming madness. At the same time, the novel complicates any simple distinction between Ahab and Ishmael (and, by implication, Ahab and the reader). Late in the novel, the carpenter attaches a vise to Ahab’s leg in the process of repairing his broken peg leg, prompting Ahab to say, “I like to feel something in this slippery world that can hold, man” (p. 512). In his need to apprehend truth in some form that is independent of the ever shifting perspective of the individual, how different is Ahab from Ishmael?

The novel poses the same problem for the reader that the white whale does for Ishmael and Ahab: both resist all-encompassing, conclusive characterizations. Moby-Dick is so capacious and multifaceted that broad statements about its meaning seem at best tentative, at worst absurdly reductive. At the conclusion of “Cetology,” Ishmael reminds us that his effort to relate everything known about whales remains unfinished; he then goes so far as to say that the “whole book is but a draught—nay, but the draught of a draught” (p. 157). Melville’s readers are well served by thinking the same of their own interpretations.

Herman Melville is now considered one of America’s greatest writers, but his life contained only a few short years of literary fame and fortune, preceded and followed by struggle and despair. He was born in 1819 in New York City to a family whose ancestors included Dutch and Scottish settlers of New York and leaders of the American Revolution. But the collapse of the family import business in 1830 and the death of Melville’s father in 1832 left the family in financial ruin. Melville held various jobs before sailing on a whaler to the South Seas in 1841, a voyage that became the subject of his first novel, Typee (1846). With the exception of Mardi(1849), a more experimental work, Melville’s next three novels—Omoo (1847), Redburn (1849), and White-Jacket (1850)—solidified his reputation as a bankable writer of entertaining sea adventures.

Melville married Elizabeth Shaw in 1847. In 1850, he met Nathaniel Hawthorne, who was then living near Pittsfield, Massachusetts. Melville bought a nearby farm, and Hawthorne became a close friend as well as a strong influence. Deeply affected by Hawthorne and his reading of William Shakespeare, Melville wrote Moby-Dick, his greatest novel, in a blaze of creative energy, publishing it in late 1851. It was a commercial and critical failure. Wounded but undeterred, Melville immediately began writing Pierre, a more personal and obscure novel whose reception was even more dismal when it appeared in 1852. Though he continued to write and publish fiction for five more years, including his best short stories (“Bartleby the Scrivener” and “Benito Cereno”) and The Confidence-Man (1857)—an intricate satire about commerce and corruption—his reputation diminished steadily until his work was revived by scholars in the 1920s.

He turned to writing verse in the late 1850s and privately published his first book of poems in 1866, Battle-Pieces and Aspects of the War, which was largely concerned with the Civil War. A few months later, he became a customs inspector on the docks of New York City, which gave him a measure of financial security for the next nineteen years. He continued to write, producing two more volumes of poetry and Billy Budd, Sailor, an unfinished novella posthumously published in 1924. He also endured immense family strife and tragedy, including the deaths of two sons. His death on September 28, 1891, prompted little notice.

Joseph Conrad, Heart of Darkness (1902)
An exploration of corruption, imperialism, and the basest of human instincts, this novella tells the story of Marlow’s journey up the Congo River in search of Kurtz, an enigmatic figure who is reputed to have overstepped the boundaries of his mission.

Ralph Waldo Emerson, “Nature” (in Nature and Selected Essays) (1836)
This essay on the relationship between the individual consciousness and the material world deeply influenced the group of American writers who came to be known as the transcendentalists.

Johann Wolfgang von Goethe, Faust Part I (1808)
The tension between driving ambition and the terrible costs it can exact is given extraordinary expression in this epic poem.

Thomas Pynchon, Gravity’s Rainbow (1973)
In this dense, intricate, encyclopedic novel, the fate of a young American soldier during World War II seems to be entwined with Germany’s development of a ballistic missile.

Cannery Row
Back to Top