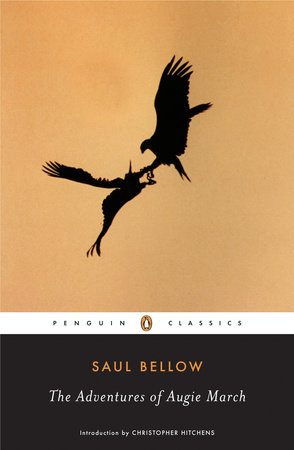 The Adventures of Augie March burst on the postwar literary scene with the exuberance of a great American author finding his true voice. The most freewheeling of Bellow’s heroes, Augie paints a fresh, gritty, comic view of the American landscape and poses anew the perennial questions: How do you reconcile freedom and love? How do you simultaneously find liberty and home in a chaotic world?

Bellow was already a well-known author when he began writing his third novel, but his early works, Dangling Man and The Victim, are very different books, written in a constrained, naturalistic form that he ultimately rejected as too limiting. Their central characters, introspective intellectuals trapped in claustrophobic circumstances, are reminiscent of Kafka’s narrators. “I was afraid to let myself go,” Bellow says of these works. He discarded the drafts of two additional novels because he felt they, too, were too bleak. Tired of the “solemnity of complaint,” the plaintive tone he heard in the novels of his contemporaries and in his own first books, Bellow turned to his boyhood home in Chicago for inspiration.

The change proved immensely liberating and gave rise to the colorful cast of Augie March: Grandma Lausch, Einhorn, Five Properties, Dingbat, and many others, all of whom were rooted in the Humboldt Park neighborhood of Bellow’s youth. Augie, a poor but spirited boy growing up in Chicago during the Depression, leaves his mother and disabled younger brother to find his way in the world. He enters a wild succession of occupations— dog groomer, saddle soap salesman, smuggler, shoplifter, boxing coach—guided by an equally fantastic array of mentors. Each of these “recruiters” attempts to determine Augie’s lot in life, but whenever he is at risk of being taken by a person or profession, he slips away to a new misadventure, equal parts joiner and escapist. Not until his affair with Thea Fenchel does Augie begin to realize that love and independence are irreconcilable.

In one sense Augie is a characteristic Bellow hero, a young man with an ironic sense of the world, wary of taking direct action but certain that he belongs to a greater destiny. Like Bellow’s other central characters, he is intent on finding a “good enough fate” eager to write his own part on life’s stage yet stubbornly resistant to the limits imposed by any scripted role. But he is also dramatically different from the brooding thinkers of Bellow’s early works. Augie is playful, subversive, adventurous, and ever optimistic. He is a new American Adam, innocently poised for a future full of promise in a land full of possibilities. No profession, no lover, no commitment can capture him. He risks his job as a book thief because he can’t resist the desire to keep and read the books he has stolen. Although this very adaptability, this lack of firm obligations makes him hard to characterize or define, his first-person narrative conveys a compelling vision of American freedom, a fresh spirit of irresistible charm.

While Augie’s character remains protean, the world he inhabits is painted with magnificent detail and texture. Infused with the vivid, hyperbolic Yiddish of his childhood, Bellow’s narrative revels in the melodramatic people and language of 1920s Chicago. As Bellow said:

“The most ordinary Yiddish conversation is full of the grandest historical, mythological, and religious allusions. The Creation, the fall, the flood, Egypt, Alexander, Titus, Napoleon, the Rothschilds, the Sages, and the Laws may get into the discussion of an egg, a clothes-line, or a pair of pants.”

The language of Augie March is likewise rife with heroic allusions, casting a mythic glow on Augie’s smallest move. Augie’s thoughts about his job as a labor organizer invoke John the Baptist, Stonewall Jackson, the Tower of Babel, and Ghandi’s India in quick succession. Yet the extravagant metaphors sound uncalculated, falling as easily on the ear as a street-corner conversation. “The great pleasure of the book was that it came easily,” Bellow said in an interview. “All I had to do was be there with buckets to catch it. That’s why the form is loose.”

Praise for Bellow’s ebullient new style was enthusiastic, if not unanimous, and he won the National Book Award in 1953. Augie March was compared to Ulysses and described as “a howlingly American book.” Supporters and critics alike recognized in him a powerful voice, a vision of America that could not be ignored. The book brought “a new sense of laughter,” wrote Alfred Kazin. “In Augie, Bellow . . . discovered himself equal to the excitement of the American experience, he shook himself all over and let himself go.”

Ultimately Augie’s vision finds a tamer, more mature expression in Herzog, Bellow’s masterwork. But Augie March holds a unique place for its rev- olutionary joy and exuberance. This rollicking tale of modern-day heroism is not only a portrait of determination and survival, but also a keenly observed drama of one man’s “refusal to lead a disappointed life.”

Praised for his vision, his ear for detail, his humor, and the masterful artistry of his prose, Saul Bellow was born of Russian Jewish parents in Lachine, Quebec in 1915, and was raised in Chicago. He received his Bachelor’s degree from Northwestern University in 1937, with honors in sociology and anthropology, and did graduate work at the University of Wisconsin. During the Second World War he served in the Merchant Marines.

His first two novels, Dangling Man (1944) and The Victim (1947) are penetrating, Kafka-like psychological studies. In 1948 he was awarded a Guggenheim Fellowship and spent two years in Paris and traveling in Europe, where he began his picaresque novel The Adventures of Augie March. Augie March went on to win the National Book Award for fiction in 1954. His later books of fiction include Seize the Day (1956); Henderson the Rain King (1959); Mosby’s Memoirs and Other Stories (1968); Mr. Sammler’s Planet (1970); Humboldt’s Gift (1975), which won the Pulitzer Prize; The Dean’s December (1982); More Die of Heartbreak (1987); Theft (1988); The Bellarosa Connection (1989); The Actual (1996); and, most recently, Ravelstein (2000). Bellow has also produced a prolific amount of non-fiction, collected in To Jerusalem and Back, a personal and literary record of his sojourn in Israel during several months in 1975, and It All Adds Up, a collection of memoirs and essays.

Bellow’s many awards include the International Literary Prize for Herzog, for which he became the first American to receive the prize; the Croix de Chevalier des Arts et Lettres, the highest literary distinction awarded by France to non-citizens; the B’nai B’rith Jewish Heritage Award for “excellence in Jewish Literature”; and America’s Democratic Legacy Award of the Anti-Defamation League of B’nai B’rith, the first time this award has been made to a literary personage. In 1976 Bellow was awarded the Nobel Prize for Literature “for the human understanding and subtle analysis of contemporary culture that are combined in his work.”

Learn More About The Adventures of Augie March
print

The Afterlife and Other Stories

Just Above My Head

All I Could Get
Back to Top