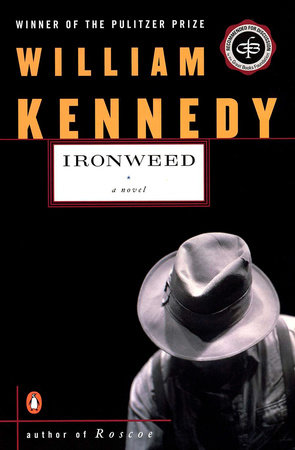 Ironweed is an unusual novel which William Kennedy found difficult to get published. Although his three previous novels had been highly praised, eleven major publishing companies rejected Ironweed. The Viking Press finally agreed to publishIronweed in 1983 along with Kennedy’s two previous novels, which are, like Ironweed, set in Albany, New York. Not only were the reviews enthusiastic, but the novel was awarded the coveted Pulitzer Prize and then the National Book Critics Circle Award in 1984. Like James Joyce’s novels which made a literary legend of the streets of Dublin, Ireland, William Kennedy’s novels have brought unprecedented attention to Albany, New York, for they immortalize the life of that capital city in the 1930’s. Kennedy has also produced a collection of tales and remembrances in O Albany! that celebrates Albany’s colorful past and Kennedy’s Irish-American boyhood.

But Ironweed is only secondarily a novel about Albany. It is primarily a novel about survival – about an ordinary man, a bum by his own admission, whose extraordinarily bad luck has brought him to rock bottom but also to the discovery, within himself, of an inner strength that he cannot understand.

NOTE TO THE TEACHER

The questions, exercises, and assignments on these pages are designed to guide students’ reading of the literary work and to provide suggestions for exploring the implications of the story through discussions, research, and writing. Most of the items can be handled individually, but small group and whole class discussions will enhance comprehension. The Response Journal should provide students with a means, first, for recording their ideas, feelings, and concerns, and then for reflecting these thoughts in their writing assignments and class discussions. These sheets may be duplicated, but teachers should select and modify items according to the needs and abilities of their students.

William Kennedy, author, screenwriter and playwright, was born and raised in Albany, New York. Kennedy brought his native city to literary life in many of his works. The Albany cycle, includes Legs, Billy Phelan’s Greatest Game, and the Pulitzer Prize winning Ironweed. The versatile Kennedy wrote the screenplay for Ironweed, the play Grand View, and cowrote the screenplay for the The Cotton Club with Francis Ford Coppola. Kennedy also wrote the nonfiction O Albany! and Riding the Yellow Trolley Car. Some of the other works he is known for include Roscoe and Very Old Bones.

Carry Me Across the Water