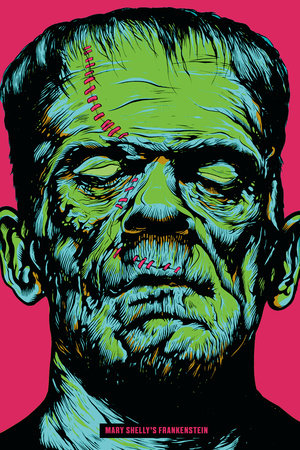 Mary Shelley’s Frankenstein begat another monster—the frequently cartooned, green-skinned Frankenstein of popular culture who roams the streets on Halloween in the company of mummies and skeletons. In the novel, the monster is nameless, and Victor Frankenstein is the creature’s creator, an earnestly romantic, idealistic, and well-educated young gentleman whose studies in “natural philosophy” (p. 40) and chemistry evolve from “a fervent longing to penetrate the secrets of nature” (p. 41). However, it is a tribute to the power of Shelley’s work—a masterpiece—that it has spawned a parody, no matter how skewed, much as Frankenstein’s creation parodies the divine creation of Adam.

There is some logic, too, in the popular tendency to conflate the monster and his creator under the name of “Frankenstein.” As the novel progresses, Frankenstein and his monster vie for the role of protagonist. We are predisposed to identify with Frankenstein, whose character is admired by his virtuous friends and family and even by the ship captain who rescues him, deranged by his quest for vengeance, from the ice floe. He is a human being, after all. However, despite his philanthropic ambition to “banish disease from the human frame and render man invulnerable to any but a violent death” (p. 42), Frankenstein becomes enmeshed in a loathsome pursuit that causes him to destroy his own health and shun his “fellow-creatures as if…guilty of a crime” (p. 57). His irresponsibility causes the death of those he loves most, and he falls under the control of his own creation.

The monster exhibits a similar kind of duality, arousing sympathy as well as horror in all who hear his tale. He demands our compassion to the extent that we recognize ourselves in his existential loneliness. Rejected by his creator and utterly alone, he learns what he can of human nature by eavesdropping on a family of cottage dwellers, and he educates himself by reading a few carefully selected titles that have fortuitously fallen across his path, among them Paradise Lost. “Who was I? What was I? Whence did I come?” (p. 131), he asks himself. Like Milton’s Satan, who almost inadvertently becomes the compelling protagonist of Paradise Lost, the monster has much to recommend him.

Despite his criminal acts, the monster’s self-consciousness and his ability to educate himself raise the question of what it means to be human. It is difficult to think of the monster as anything less than human in his plea for understanding from Frankenstein: “Believe me, Frankenstein: I was benevolent; my soul glowed with love and humanity; but am I not alone, miserably alone? You, my creator, abhor me; what hope can I gather from your fellow-creatures, who owe me nothing? they spurn and hate me” (p. 103). When his anonymous acts of kindness toward the cottage dwellers are repaid with baseless hatred, we have to wonder whether it is the world he inhabits, as opposed to something innate, that causes him to commit atrocities. Nonetheless, he retains a conscience and an intense longing for another kind of existence.

By their own accounts, both Frankenstein and the monster begin with benevolent intentions and become murderers. The monster may seem more sympathetic because he is by nature an outsider, whereas Frankenstein deliberately removes himself from human society. When Frankenstein first becomes engrossed in his efforts to create life, collecting materials from the dissecting room and slaughterhouse, he breaks his ties with friends and family, becoming increasingly isolated. His father reprimands him for this, prompting Frankenstein to ask himself what his single-minded quest for knowledge has cost him, and whether or not it is morally justifiable. Looking back, he concludes that it is not, contrary to his belief at the time: “if no man allowed any pursuit whatsoever to interfere with the tranquillity of his domestic affections, Greece had not been enslaved; Caesar would have spared his country; America would have been discovered more gradually; and the empires of Mexico and Peru had not been destroyed” (p. 56). Passages such as this one suggest the possibility that Shelley is writing about the potentially disastrous consequences of not only human ambition, but also a specific kind of masculine ambition. The point of view here may be that of a nineteenth-century woman offering a feminist critique of history.

Far more than the simple ghost story a teenaged Shelley set out to write, Frankenstein borrows elements of Gothic horror, anticipates science fiction, and asks enduring questions about human nature and the relationship between God and man. Modern man is the monster, estranged from his creator—sometimes believing his own origins to be meaningless and accidental, and full of rage at the conditions of his existence. Modern man is also Frankenstein, likewise estranged from his creator—usurping the powers of God and irresponsibly tinkering with nature, full of benign purpose and malignant results.Frankenstein is both a criticism of humanity, especially of the human notions of technical progress, science, and enlightenment, and a deeply humanistic work full of sympathy for the human condition.

Mary Shelley was born in London in 1797, the daughter of two well-known writers and radical political thinkers. Her mother, the proto-feminist Mary Wollstonecraft, died ten days after Shelley was born. Shelley grew up worshiping her father, William Godwin (to whom Frankenstein is dedicated). Emotionally distant, he nonetheless oversaw her education and held high expectations for her intellectual development and literary ambition. It was through her father that Mary met the Romantic poet Percy Bysshe Shelley, then a young married man who admired Godwin’s work and frequently visited their home. Mary was sixteen and Shelley was still married (and his wife pregnant) when they eloped to the continent to escape Godwin’s wrath, taking with them Claire Clairmont, Mary’s stepsister.

Much of Mary Shelley’s life was marked by tumult and tragedy, giving her ample material for the themes of abandonment and loss that pervade Frankenstein. A daughter was born prematurely in 1815 and died a few days later. In 1816, when Mary, Percy, and Claire were neighbors of the poet Lord Byron in Switzerland, Byron proposed that for entertainment the assembled company, which included Byron’s personal physician, each write “a ghost story.” Mary began to writeFrankenstein. That same year, her half-sister, Fanny Imlay, committed suicide. A few months later, Percy’s wife, Harriet, drowned. In December 1816, Mary and Percy were married in London. They had four children altogether, only one of whom survived childhood, before Percy Shelley drowned at sea in 1822.

During her lifetime, Mary Shelley wrote several novels, including Frankenstein (1818) and The Last Man (1826). She collected Percy Shelley’s posthumous poetry and wrote biographical essays as well as numerous articles and stories for magazines. She died in London in 1851, at age fifty-three.

Aeschylus, Prometheus Bound
In this tragic version of the Greek myth, Prometheus is a complex, heroic figure who suffers unjustly for defying Zeus by giving fire and other gifts to humans.

Karel Capek, R. U. R.: Rossum’s Universal Robots (1920)
The word robot, from the Czech word for forced labor, entered the language in this popular and influential play about humanlike machines that ultimately cause more problems than they solve.

John Milton, Paradise Lost (1667)
This monumental epic poem, which recounts Adam and Eve’s expulsion from the Garden of Eden and the origin of Satan, is an endlessly rich exploration of the relationship between God and humans.

Harry Mulisch, The Procedure (2001)
Echoing the rabbi in the legend of the golem (as well as Victor Frankenstein), a Dutch biologist successfully develops life from inorganic matter—and suffers the consequences—in this novel investigating the nature of creation, love, and time.

Percy Bysshe Shelley, Prometheus Unbound (1820)
In this lyrical drama, an allegorical continuation of Aeschylus’s Prometheus cycle that takes on cosmic proportions, a Romantic Prometheus typifying an idealized humanity is wedded to Nature.

Girls Who Green the World

The Gilded Ones #2: The Merciless Ones

Some Girls Do
Back to Top